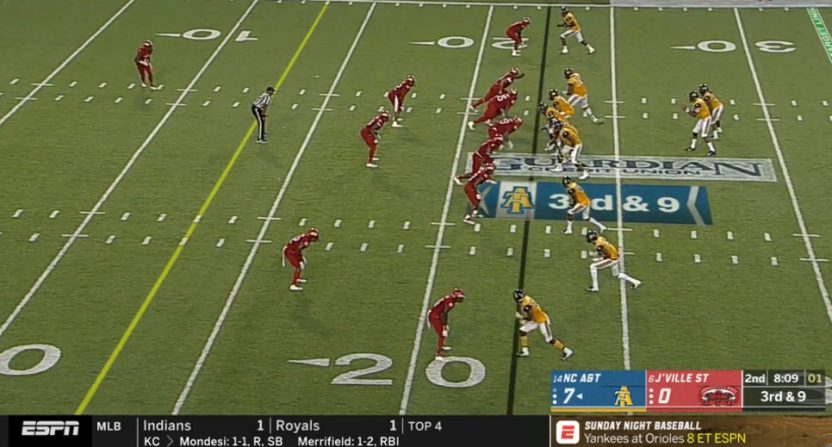 Every so often, ESPN reworks its various graphics packages, and we like to take note when they do. They recently changed up the Bottom Line ticker, and now it looks like they’re changing their NCAA football scorebug as well. That scorebug has already seen some changes over the past few years, from the move to the bottom-right vertical box in early 2015 (previously seen during some 2014 bowls), which appears to have remained mostly consistent through the 2016 season until the 2016 College Football Playoff added italics and gold trim. The 2017 season saw ESPN get rid of the italics for most games, but bring them back for the playoff games. Now, if their first linear college football broadcast of the year (a Division I FCS matchup Saturday featuring North Carolina A&T against Jacksonville State) is any indication, they’ve made some modifications; most notably changing the box from a vertical one to a horizontal one, but also going back to the italics. Here’s a look at that:

Not that we really needed it, but confirmation that this is the new official ESPN score box. Has not made its way to ESPN+ teams, apparently. pic.twitter.com/HGvlvHfJ1g

This was also used in some high school games Saturday:

@awfulannouncing did ESPN get a new football scorebug? This is on the HS game right now pic.twitter.com/DYgsMhWPJt

@bubbaprog I may have missed it but is this the new ESPN scorebug for football? pic.twitter.com/ktVWBa9hKF

But the ESPN+ scorebug still has the vertical box and the lack of italics:

This does look to be the standard for ESPN’s NCAA games this season. We’ll see if it’s eventually used on the ESPN+ games as well or if those continue to have the old one. Hopefully this change goes over better than the one they made to their college basketball scorebug last year.