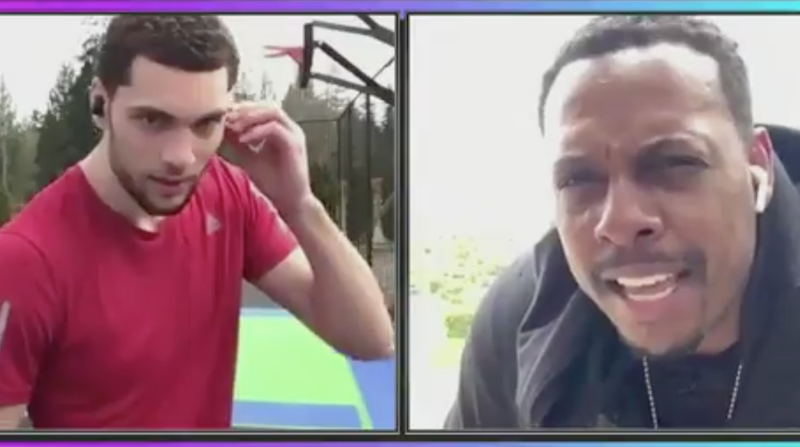 ESPN’s NBA HORSE Challenge seemed like a fun idea with games being shut down. And at least everybody involved gave it a good try. But any fans who thought any basketball-related competition would fill a month-long void had to be disappointed with the actual product.

Sunday night’s telecast was tough for viewers to watch, largely because of the significant limitations placed on the competition. And those restrictions couldn’t be helped with COVID-19 isolation and social distancing concerns taking the highest priority.

Participants couldn’t be gathered together in the same gym, so each player involved played from a home court. No professional camera crews could be used, so players were shooting footage and communication through smartphones and tablets. If you’ve done a FaceTime or Skype call, you know how unreliable video and audio can sometimes be. Those are exactly the issues ESPN’s telecast dealt with, making for an unpleasant TV experience.

I really appreciate the NBA and ESPN’s effort to entertain us, but this HORSE competition is making me depressed… pic.twitter.com/7Q7GSp3ZiJ

The picture was blurry and often lagged. The sound was muffled and incoherent. We’re accustomed to seeing better homemade videos on our phones and YouTube these days. It was like the telecast fell back in time to the days before smartphone-quality content.As could be expected, plenty of fans went to Twitter and made fun of the poor video quality seen during the HORSE Challenge.

These dudes make millions of dollars but their HORSE footage looks like this pic.twitter.com/KmutWsj15U

For those who tuned in and stayed with it, the competition did actually have some surprises and drama. Retired NBA star and current Los Angeles Clippers (and ESPN) TV analyst Chauncey Billups fell behind 3-0 (or H-O-R) in his game versus Atlanta Hawks guard Trae Young. It looked like the older player would fall to the young star. But Billups rallied for a comeback win.

.@1MrBigShot beats @TheTraeYoung in the first round of the NBA HORSE Challenge after Trae initially built a 3-0 lead. pic.twitter.com/3CJQgpbBnq

So Billups matches up against Conley, while LaVine plays Quigley in Thursday’s (April 16)semifinals, which will also be broadcast on ESPN. The question is whether or not anyone will watch after Sunday’s shaky viewing experience.

HORSE is even worse than expected. There’s gotta be something better than this. Why not have players offer live commentary of classic games with breakdowns of key plays? Why not have better produced player-with-player convos like on IG Live? Anything but a laggy stream of HORSE.

More of a disappointment than the video quality, however, was the lack of creativity among the players involved. Standing on one leg and shooting left-handed? OK, but where were the bold trick shots?

Nobody took a shot with their back to the basket and heaved it overhead. There were no bounce shots, off the court, off the backboard, into the rim. And though play was limited by half-court settings, only LaVine took a truly long attempt from deep range.

Thankfully, Quigley brought some fun to the game with a tribute to Pete Maravich, shooting while sitting down on her court.

And LaVine took advantage of his great leaping ability and hang-time, making a difficult shot that Pierce wasn’t going to match. That provided the evening’s one bit of comedy, also providing solace to those of us with lesser skill or who aren’t what we used to be on the court.

Paul Pierce making many of us feel better about our HORSE skills ???? pic.twitter.com/xh13IFDY8B

One lesser storyline during the contest was the difference in setting between highly-paid NBA stars and lesser-compensated WNBA players was on full display. For instance, Conley participated from his gorgeous indoor court at home while Catchings shot in her driveway.

(To be fair, Young also played in his back lot with a basket that appeared to be shorter than 10 feet and a bent rim, compared to Billups’ lavish, fenced-in outdoor court.No, there probably shouldn’t have been much to expect from a televised HORSE competition — even one with professional basketball players. However, the poor quality of video and sound was still a considerable disappointment and surely compelled many viewers to turn the channel.

Playing HORSE is barely fun, what did you think this was gonna be?

Ultimately, Sunday’s telecast was a reminder that HORSE isn’t really that fun of a game.

How often do people play it? And doesn’t that usually happen after a more competitive game, after everyone is already tired out? Or with nothing better to do and a need to pass some time? Maybe a way for lesser-skilled players to beat more athletic rivals?

Where have you gone, Michael Jordan and Larry Bird? A basketball-starved nation turns its lonely eyes to you. Woo woo woo…