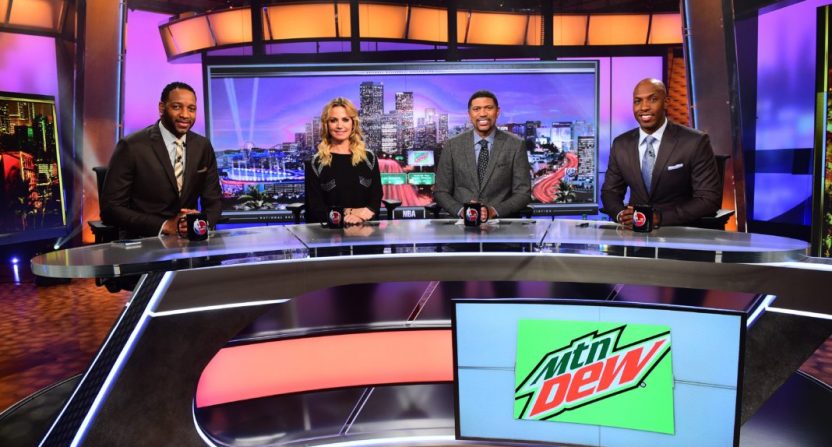 With Michelle Beadle and Jalen Rose heading to the upcoming Get Up morning show with Mike Greenberg while retaining their NBA Countdown roles (at least for now), it was clear that the NBA studio show would be leaving Los Angeles.

But we now have details on when and for where, with Ryan Glasspiegel of The Big Lead reporting Tuesday that Countdown is moving from L.A. to ESPN’s Bristol headquarters immediately, then heading down the road to the new studios in New York City (where Get Up will also be filmed) once those open in April. (Get Up is set to premiere April 2, and it seems likely Countdown will move to New York around that time as well.)

Glasspiegel adds that there’s another NBA move in the works at ESPN, with the Rachel Nichols-hosted The Jump expanding from a half hour to a full hour:

ESPN’s NBA Countdown has taped its last show in Los Angeles, an ESPN spokesperson confirmed to The Big Lead. The program will be taped in Bristol for the next few weeks before moving to New York when the studio is ready. In further news, The Jump, hosted by Rachel Nichols, will be expanding to an hour every weekday, from 3-4 pm ET, beginning March 12th.

The news is not altogether surprising. Michelle Beadle and Jalen Rose are going to be particularly busy for the next few months. They will remain on Countdown all four days a week it airs — Wednesday and Friday on ESPN; Saturday and Sunday on ABC — while preparing for and ultimately launching the new morning program Get Up, along with Mike Greenberg, which is slated to debut on April 2nd. Chauncey Billups and Paul Pierce will also remain regulars on Countdown. David Fizdale will also be on the show a bit, at least while it’s in Bristol.

While there are undoubtedly challenges in moving a show and then quickly moving it again, the relocation here seems to make a good deal of sense. We know that ESPN tends to do a lot of rehearsals of any new show before it actually airs, and they’re betting on Get Up in a big way, so it’s logical that they’d want Beadle and Rose around in person for those rehearsals.

This will maybe give the network a look at how sustainable it is long-term to have Beadle and Rose working on both an evening NBA preview show and a morning general sports show. There’s been a lot of speculation that they may move off Countdown eventually, but if the grind doesn’t prove too bad, maybe they’ll stick with both. At the very least, a month-plus of Countdown shows in Bristol will help Beadle and Rose adjust to working on the East Coast before the Get Up launch and the Countdown move to NYC.

It’s also notable that so much of the production for both Countdown and Get Up is going to be handled remotely. That’s certainly possible given modern technology, but it’s an interesting decision. There are plenty of possible reasons there, from production staffers having other responsibilities at the network that makes it more efficient to have them in Bristol or LA to just a desire to relocate less people, and it may never have a significant on-air impact. But it’s interesting to hear about that, and that will be something to keep in mind when watching these shows.

The most unexpected thing here may be the expansion of The Jump, but that also makes a lot of sense. The Nichols-hosted show has made a significant impact since its February 2016 debut, and has earned plenty of plaudits for its mix of serious NBA discussion combined with the less-Xs-and-Os narratives around the league.

ESPN is betting on the NBA in a big way, thanks to their giant and controversial contract that runs through 2025. So it seems reasonable for them to devote some more airtime to a NBA-specific show that already has a significant following. We’ll see how that format change goes, but it’s certainly one with some logic to it.