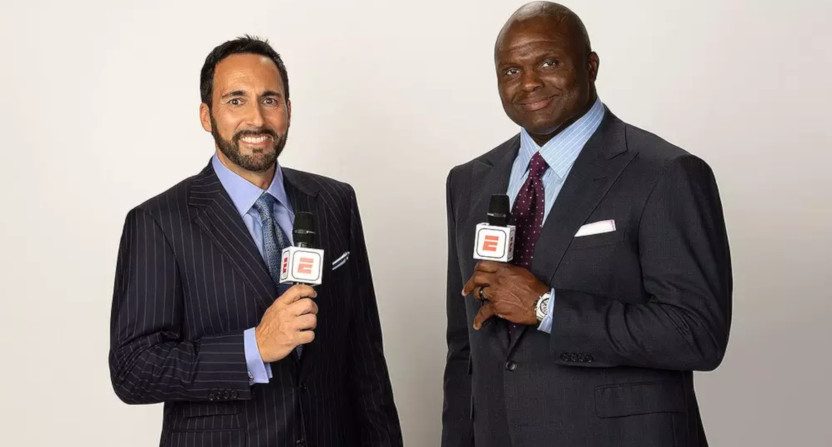 There’s been a lot of discussion about the idea of ESPN changing up their Monday Night Football booth this offseason, as despite good ratings for their games last year, the two-man booth of Joe Tessitore and Booger McFarland took a fair bit of criticism. That criticism included them finishing 15th out of the 15 booths ranked in our national NFL announcing rankings reader poll, with a most common grade of F and only a slight average grade improvement over the previous year’s three-man booth of Tessitore, McFarland and Jason Witten  (which also finished last). Now, it appears that discussion has come to fruition.

Andrew Marchand of The New York Post confirmed the news of McFarland and Tessitore leaving MNF, and added some comments on favorites to replace them:

This is accurate. As I wrote early last month, Steve Levy, Dan Orlovsky, Louis Riddick and Brian Griese are the favorites as the replacements, according to sources. I'm working on a new story now. https://t.co/YHhZnEkkvU

Levy, Griese and Riddick called the second game of last year’s MNF opening doubleheader (with reporter Laura Rutledge), and Griese called the B matchup of the 2018 opening doubleheader (which was actually the first game) as well, alongside Beth Mowins (again with Rutledge reporting). Levy and Greise have worked together on ESPN’s college football coverage and have called Denver Broncos’ preseason games together. Levy also worked on ESPN’s top XFL team with Greg McElroy this year, and Riddick has long been discussed as a MNF candidate (and was passed over for the role in 2018 despite strong interest on his end).

Orlovsky would be a more outside-the-box choice, as he’s only been at ESPN since 2018, but he’s been a rising presence there, working on college games and regularly appearing on shows like Get Up. We’ll see if ESPN winds up going with some combination of these names for the new MNF booth or if they go further afield, but it’s certainly interesting to hear that they’ve definitively moved on from McFarland and Tessitore on MNF. And with a strong projected MNF schedule this year, there will be a lot of people watching whoever the new booth is.