Heading into the release of the 2017-18 NFL schedule Thursday night, one of the biggest questions was if ESPN would get “better” games for Monday Night Football. ESPN pays the league more than anyone else (although it’s worth noting that their fee also includes highlights, which the network fees don’t, and that they pay a premium for being a cable network rather than a broadcast network), but there had been plenty of complaints in recent years about the quality of games on MNF, and not just externally.

Those complaints definitely came from the ESPN ranks too, and at a high level. Burke Magnus, ESPN’s executive vice president of programming and scheduling, told the 2017 CAA World Congress of Sports Wednesday the network had high hopes for a solid schedule, saying “We have high expectations because we’ve been as engaged with the league as we ever have been in terms of what the results are going to be. …We’ve done everything we can possibly do to communicate with the league and guide them in terms of our preferences, and now we’ll see.” But when the schedule was finally released, did they get there? Well, yes, but maybe not by a huge amount.

There are tons of ways to evaluate a NFL schedule, but many of them are pretty subjective and prone to bias (“My team’s on this, so it’s great!”), and even some unbiased ones are hindsight-focused. For example, the Washington Post‘s piece on Magnus’ comments led with just two MNF games in 2016-17 featuring teams that would make the playoffs, versus five similar games on NBC’s Sunday Night Football. But who will make the playoffs in a given season isn’t known with a great degree of certainty at the start of the season.

A better metric for how “good” the teams are is how many games they won the previous season. I put together a chart with every home and road MNF team’s total wins in the previous season (abbreviated as PHW and PRW respectively, using data from 2015-16 for the 2016-17 season and 2016-17 for the upcoming 2017-18 season). It illustrates that the teams appearing on MNF this year have a cumulative nine extra previous-season wins versus last year. (Note: 1B is the second game of the opening-week doubleheader, and PTW is previous total wins, counting both teams involved in each game.) 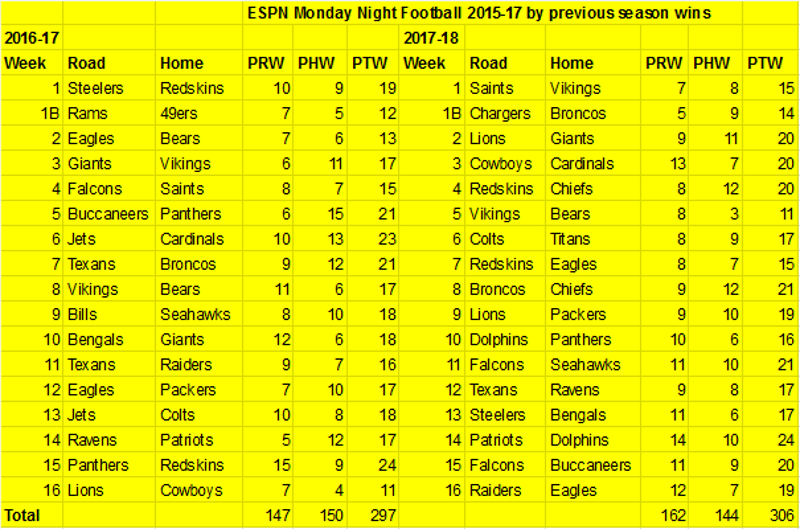 Nine extra wins isn’t all that much over a 17-game schedule, though, especially when you consider that this is factoring in both teams involved in each game. That means that on average, each team involved in a MNF game in 2017-18 was just over .25 of a win better in the previous season than the average MNF team in 2016-17. And this doesn’t always produce results, because things change from year to year.

For example, the Carolina Panthers were highly desirable at the start of last season thanks to their 15-1 record and Super Bowl appearance in 2015-16, but they went just 6-10 on the year, hurting their Week 5 game against Tampa Bay and really hurting their Week 15 game against Washingon (who also had a downturn from 9-7 with a division title and a playoff appearance to 8-7-1 without either). That made them a much less interesting team in reality than they looked to be based on the schedule. However, ESPN did get slightly better teams (on aggregate) this year than last, so their odds are better.

The bigger question from a business perspective may be about the markets, though. The dirty secret of the parity-obsessed NFL is that all markets are far from equal when it comes to television, and that’s not entirely correlated with winning. A good season or two can help, but some teams (looking at you, Dallas Cowboys) will always outdraw others (looking at you, Jacksonville Jaguars and Tennessee Titans) regardless of their records.

Anthony Crupi of Advertising Age had a fascinating piece last year with the 2016-17 ratings for every single market’s primetime appearances (which said very good things about Fox and their NFC package), so it’s worth running an analysis on how the MNF teams in 2016-17 and 2017-18 stacked up from that perspective. Here’s that. (Note: RMR is road market ranking, HMR is home market ranking, TMR is total market ranking. This is 1-32, with 1 as the best, so lower numbers are better.) 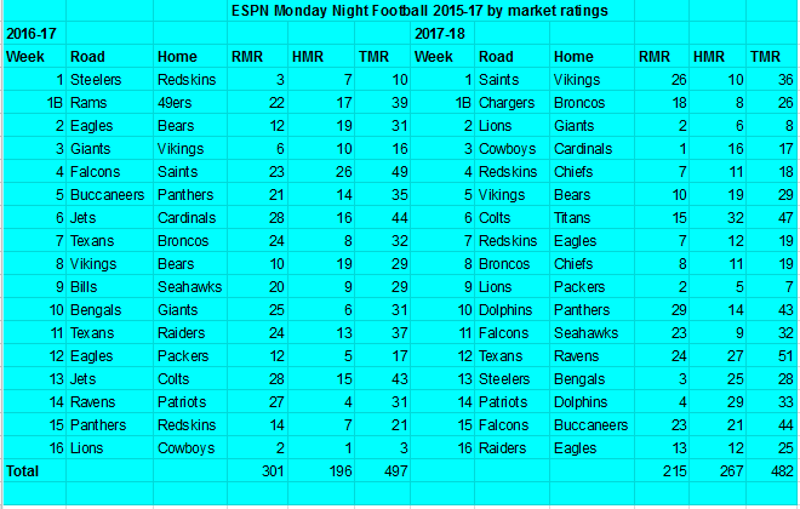 By that count, ESPN is 15 market rating positions better off this year versus last year. Of course, those are actual primetime ratings from last year (across all networks), and they’re affected at least somewhat by teams’ success and by the opponents they were facing. Consider 14th-ranked Carolina, which probably fell down a ways thanks to their disappointing season, and also didn’t get marquee opponents. And a difference of one ranking isn’t always equal; that can be 2.7 million average viewers (#2 to #3) or identical viewership numbers (#31 to #32). Still, this again suggests that ESPN is a bit better off this year, but not incredibly.

So, by two separate important metrics, the NFL did give ESPN a better schedule this year. It’s not a better schedule by a whole lot, though, and the question is if it will be enough to dull grumbling about the MNF slate. And a real key question there is how teams do. Something like Week 12’s Texans-Ravens game doesn’t look great from either of these metrics (17 combined wins last year, 51st in total market ranking), but if either or both of those teams is contending for a division title, that one could do okay.

We’ll see how it all plays out. But it does appear that ESPN was able to get a slightly better schedule for itself on paper. The question is if that will be enough to actually produce significantly better ratings.