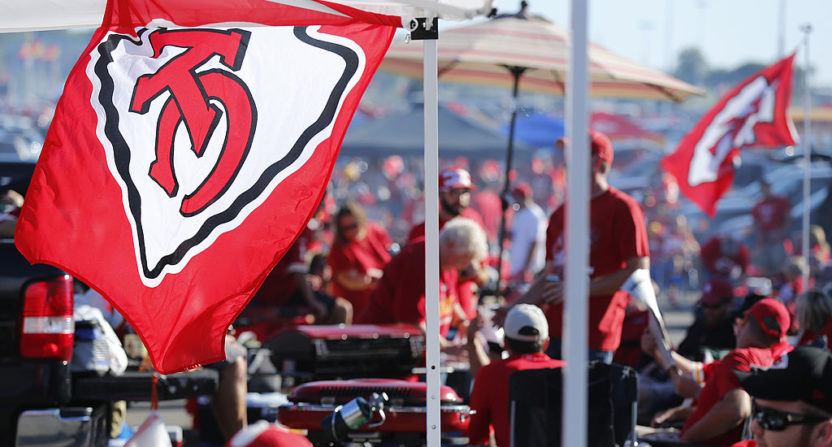 ESPN has never been afraid to attempt to capture a bit of local flavor for their live, on-site productions. College GameDay is certainly a prime example, and it’s that sense of place each week that helps GameDay continue to be one of the network’s best shows.

But the NFL side of production also travels weekly along with Monday Night Football, and while they normally set up shop within the confines of the stadium, in the hours leading up to an NFL game, that leads to plenty of empty stadium shots with a few players warming up in the background. For a primetime game especially, the real action tends to be in the parking lot, where most cities have at least a passable tailgating scene.

And that’s where Monday Night Countdown is going this Monday in Kansas City, announcing a new tailgating hour that will make its debut at Arrowhead Stadium.

Via The Kansas City Star:

So, ahead of the Chiefs’ game against Washington on Monday night, ESPN will roll out a new “tailgating hour,” and a number of network personalities will be in the Truman Sports Complex parking area.

“Honestly, I think it’s the best-smelling parking lot that I’ve ever been to in any NFL stadium,” Seth Markman, ESPN’s senior coordinating producer, said. “It’s caught all of our attention, to be honest, over the the years.

“So we decided that as great as the atmosphere is inside of Arrowhead, when we go on the air and it’s 5 o’clock local time and the game doesn’t kick off until 7:30, let’s be where a little more of the action is to start the show and do some special stuff around that and get some of the Kansas City fans involved instead of being inside an empty stadium.”

One doesn’t tend to associate NFL parking lots with great smells, to be honest, but if we’re limiting it to strictly a barbecue aroma, then sure, it makes sense that Kansas City would be on top of the list. Of course, another staple of the NFL tailgate scene, especially for night games, is drunken fan behavior. This might liven things up a bit, especially with Randy Moss and Charles Woodson being dispatched into the wilderness:

Markman said all the details haven’t been finalized, but they want the country to see Chiefs fans.

“Randy Moss and Charles Woodson will take a tour of the tailgating scene,” Markman said. “They’ll be out touring and who knows? Tasting some barbecue and having some fun with fans. This just gives us a way to have the fans as close to us as possible.

“I think there some interaction. We’ll figure out all the content pieces of it, but it won’t be just stand here and watch the show. We want to be as interactive as we can be.”

The viewing audience as a whole probably wants to see Chiefs fans, too, but the FCC and perhaps the more sensitive members of the viewing audience might not agree so much with that assessment. ESPN certainly has to be aware of this possibility, so they’ll likely be quicker on the dump button than some networks.

But, there’s limited downside here, even if it is a somewhat shameless play on College GameDay. There’s no better production from which to crib notes, after all. Though if this becomes a weekly staple, it makes it even less likely that Monday Night Football will be back in Buffalo any time soon.