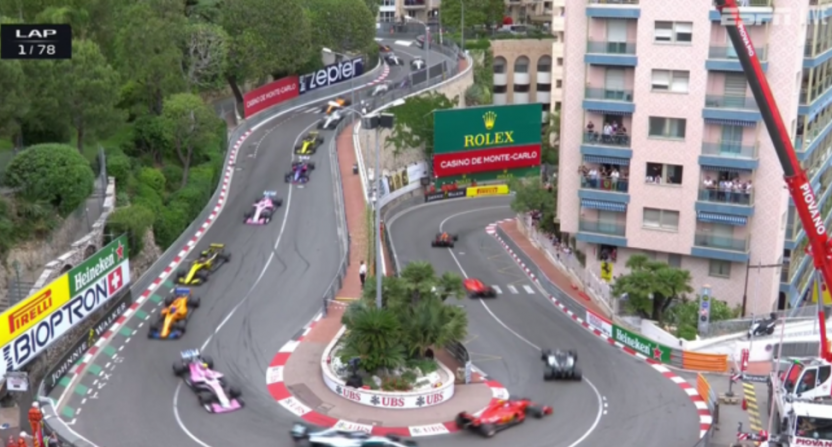 While ABC’s final Indianapolis 500 broadcast (the race moves to NBC next year) Sunday drew their lowest rating in over 30 years, there was some good open-wheel racing news that day for ABC and ESPN. That would be the broadcast of the Monaco Grand Prix, which, as per an ESPN release, was the most-watched Formula 1 race on cable in 23 years:

ESPN’s live telecast of the Formula 1 Monaco Grand Prix on Sunday, May 27, earned F1’s largest audience on cable in more than two decades, according to Nielsen Fast National data.

With an average of 809,000 people watching, the telecast was the most-viewed Formula 1 race on cable since the 1995 Italian Grand Prix, which also aired on ESPN and averaged 876,000 viewers.

It should be noted that even a historically-bad Indy 500 rating (a 3.4 overnight) still meant many more viewers (3.74 million households; viewership estimates haven’t turned up yet) than tuned in for either the live or replay F1 telecast, and that the F1 replay on ABC likely benefited quite a bit from having even a weak Indy 500 as its lead-in. So take the 40 percent year-over-year increase from NBC and NBCSN with a grain of salt; NBC and NBCSN didn’t have the benefit of using Indy 500 coverage (still on ABC last year) to bolster the F1 replay.

And as for the replay outdrawing the live broadcast by so much, it also helps that it was on broadcast versus cable, reaching a potential audience of over 30 million more households, and that it was much later than the 9:05 a.m. Eastern live start. The biggest factor there is likely the Indy 500 lead-in, though.

But the cable audience being the best since 1995 is interesting, and it bodes well for the future of the multi-year deal that saw F1 return to ESPN for the first time since 1997. That deal only started this year, and got off to a rough start with commercial interruptions, odd cuts and more, but ESPN apologized for that, and has since gone to commercial-free coverage for the rest of the season. And these are certainly good numbers for them.

Of course, ESPN has significant advantages over the other cable channels that have aired F1 since 1997. Much of that coverage went to Speedvision at first (the channel that became Speed in 2001 and then FS1 in 2013), and it had significantly less distribution and less audience than ESPN, especially at first. Even as Speed grew in prominence following News Corp’s acquisition of the channel in 2001, it still wasn’t on the scale of ESPN’s distribution, and while some events like Monaco were picked up by Fox Sports affiliates, the cable side of the deal was still not at the level of ESPN’s distribution.

The move to NBC and NBCSN in 2012 boosted distribution a fair bit, but NBCSN was still lagging ESPN in households pretty significantly at that point; they’re much closer now thanks to ESPN’s subscriber loss, but are still over 2.5 million homes back (as per the May Nielsen coverage estimates). So having races back on ESPN carries some exposure benefits, and it’s not entirely surprising that they were able to pull bigger numbers than the other channels that have carried F1. But it is a good sign for interest in F1, and for the ESPN F1 deal. We’ll see how the ratings go from here, but this is a pretty nice result for both sides.