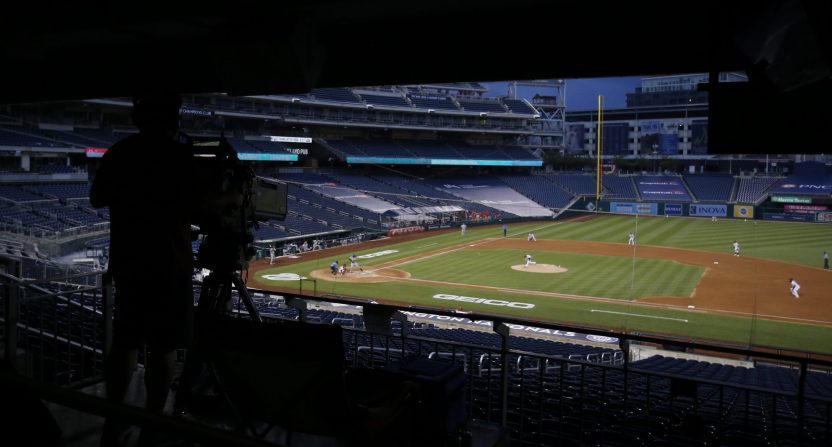 In case you were wondering if people missed watching Major League Baseball games, let there be no doubt that the answer is yes.

Despite the Covid-19 pandemic, despite concerns about players kneeling, despite the fractured relationship between players and owners, and despite the lack of fans in the stadium, audiences showed up in droves for MLB’s most unique opening day ever. Per an ESPN release, Thursday’s broadcast of the season opener between the defending champion Washington Nationals and the New York Yankees generated an average audience of around four million viewers, per Nielsen. That number makes it the most-watched regular-season MLG game televised on any network since 2011.

The game’s viewership peaked with 4,480,000 viewers at 8:30 p.m. ET. Furthermore, as Richard Deitsch noted, the in-market numbers for both cities were pretty remarkable as well.

That four million viewer number eclipses ESPN’s previous Opening Night record of 3.7 million viewers, set in 2017 for a game between the St. Louis Cardinals and Chicago Cubs. The Yankees-Nats game was also up a staggering 232 percent from last year’s season-opener, which featured the Boston Red Sox and Seattle Mariners and drew an average of 1,200,000 viewers.

Of course, comparing this year’s Opening Night to last year’s game is a bit unfair and comes with some strong caveats. The Yankees and Nationals are going to draw a lot more eyeballs than the Mariners. Plus, this year’s season-opener comes towards the end of July following months of will-they-or-won’t-they delays due to the Covid-19 pandemic. The numbers are certainly impressive, but given the pent-up demand for live sports, it was also somewhat expected.

The only thing that seemed to dampen the rating numbers was the weather. The game, which the Yankees won 4-1, was cut short by rain.

The evening’s ratings also remained strong during the second game, which featured the San Francisco Giants at the Los Angeles Dodgers. That West Coast tilt averaged 2,764,000 viewers and ended up as ESPN’s “most-watched MLB regular season late night ET game ever,” which is highly specific. That game also drew big local numbers, pulling a 6.9 rating in San Francisco and a 6.8 rating in Los Angeles. Those numbers are the highest-rated regular-season MLB games in their markets since 2013 and 2018, respectively.

The huge numbers are a clear shot across the bow of anyone who thought that Black Lives Matter protests or national anthem kneeling would have an outsized impact on the audience. They also bode well for the other leagues that have yet to return and are likely wondering what impact these social issues might have for them (clearly, not much, at least in terms of ratings). It also follows in line with other leagues that have rebooted. NASCAR’s first race back in May drew 6.3 million viewers, which was a three-year high for the racing series. Meanwhile, PGA Tour ratings have been well ahead of last year’s numbers as well.