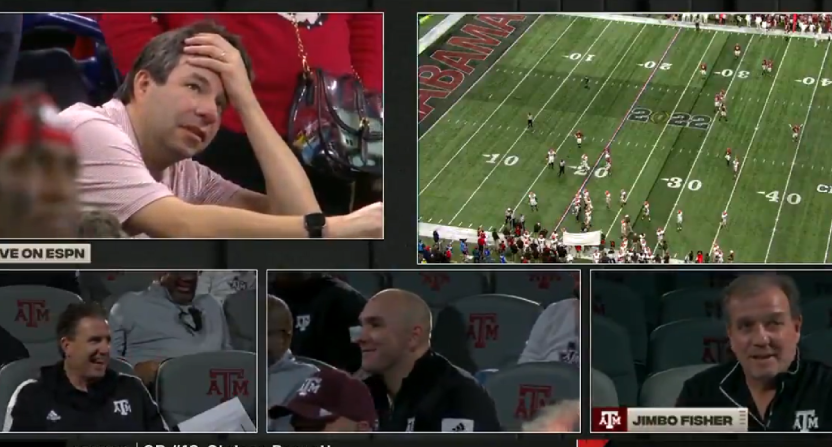 Television that educates while it entertains isn’t just for parents pushing PBS Kids to their children.

ESPN’s Film Room portion of its annual College Football Playoff MegaCast is a highlight of the sports calendar every year, offering football fans in-depth analysis that stands out as a true alternative in the era of Embrace Debate.

The Playoff is, at its core, a made-for-TV event. Sure, it was launched ostensibly under the pretense of crowning a true national champion. But from the aggressive marketing that starts before Week 1 to the unspoken role broadcast rights play in the ongoing expansion conversation,

To that end, the MegaCast in general and Film Room specifically are brilliant TV innovations for a TV product. And they need not be limited to a once-a-year-event.

Film Room meets demand for substantive football conversation that details why the game unfolds as it does. Strategy and execution take precedent over the hot-take topic du jour.

“Explaining the why and how are just as, if not more, important as the results,” said Michael Felder, an analyst for Stadium and former University of North Carolina defensive back. “If you don’t understand why things are happening or how teams have approached things, then the results are hollow.

“It is easy to list off stat rankings,” he added. “But if there’s no story behind why a team is so good at a thing, or on the other side, really bad at something, then you don’t have the full picture.”

Felder hosts a segment on Stadium, “Tape Don’t Lie,” that breaks down strategy in a manner similar to Film Room.

Our @InTheBleachers has another Tape Don't Lie where he breaks down Alabama's backbreaking plays against Georgia in the 2nd quarter of the SEC Championship game! pic.twitter.com/OYVOIGebUk

Football bypassed baseball as America’s Game some time around the turn of this century, and remains one of TV’s few proven winners for advertisers in the streaming age.

Despite its popularity as a spectator sport football is arguably the least schematically understood by its audience. Felder noted how TV can fill a role viewers may have missed out on never being coached.

“Doing some teaching along the way can go a long way to helping people understand the why and the how,” he said. “Which leads to a more elevated conversation and helps push the sport beyond merely rooting for colors or being someone’s favorite TV show.”

The football community came together in recent weeks to celebrate the life of John Madden, who had great success as a player and coach and then somehow surpassed those achievements as a broadcaster and teacher of the game.

“[Madden] had a deep knowledge of the game and was able to communicate it in a way that was easily accessible to the audience,” said Ernie Lawson. Lawson was an All-Mountain West defensive lineman at San Diego State in 2010, and later became an Aztecs assistant.

Lawson provides his own accessible breakdowns focusing on defensive line play at Get2TheQB.com.

“I have a great respect for guys who call games because it is a hard job to go out and be entertaining and informative while millions of people judge you,” he said. “I can only imagine how hard that can be at times.”

Striking that right balance of entertaining and informative is indeed difficult. Few, if any, have ever done it as well as Madden.

Madden wasn’t the first to use telestrators and whiteboards, but he mastered the art for both teaching and entertainment.

The Film Room concept is something of a digital age successor to Madden. No individual analyst is likely to ever again revolutionize broadcasting like Madden did, but today’s technology provides an opportunity to expand on the kinds of innovation and analysis that made him so iconic.

Given ESPN’s various commitments and overall game inventory, turning ESPN2 into an analysis channel every Saturday during the college season isn’t an option. But considering the never-ending search for inventory and value-adds on ESPN+, the company’s streaming platform could provide space for more frequent film-room simulcasts.

A serial format that changes from game-to-game, emphasizing particular personnel groupings one week, breaking down different schemes another – Paul Johnson is available for a triple-option episode and was excellent on a past edition of the MegaCast Film Room – the possibilities are as intriguing as they are vast.

After this postseason, there’s a precedent for tweaking the formula.

The 2022 edition confirmed Film Room’s value by changing the dynamic, going away from bringing in head coaches from a variety of programs to instead feature a single team’s staff, without negatively impacting the presentation.

On the contrary, Jimbo Fisher and his staff delivered a show emblematic of the championship game itself: a slow start attributable to nerves that became increasingly entertaining as the night progressed.

And while Film Room episodes of title games past were must-watch for the different insights each coach offered, the familiarity among the A&M group made for a relaxed environment. This Film Room gave the viewer the feel of being a fly on the wall for a film session.

This setup made for relatable moments, like Fisher shouting at the projector for Nick Saban to take a timeout before halftime or James Coley’s gleeful exclamation at a despondent Georgia fan captured after Stetson Bennett’s late-game fumble.

"Look at this guy!" pic.twitter.com/E6Hut9CHtJ

But entertaining banter among colleagues was only one aspect of the presentation, and it didn’t come at the expense of insight. For example, the breakdown of how (before his injury) Alabama shifted wide receiver Jameson Williams to force Georgia’s nickelback to commit.

Williams torched Georgia in the SEC Championship matchup, and Film Room demonstrated the strategy behind the statistics. Matchups between receivers and defensive backs are usually difficult to analyze and follow on traditional broadcasts thanks in large part to the broadcast angle itself.

“The secondary, the way football is shot for TV, are only half on the screen,” Felder said. “Guy closest to a big play is blamed, [like] a corner[back] when the safety goes the wrong way or a safety expanding wide when a linebacker was supposed to be in the hole leading to a nice play up the seam.”

Felder cited the secondary and line when asked the areas in which average fans might have the greatest misconceptions based on their viewing habits.

He described play on the line as “a mush on the screen” for the untrained eye. A serious deep-dive into the intricacies of line play reveals what Lawson called, “an awesome chess match that plays out over 60 minutes.

“There is so much nuance to why a guy does what he does,” Lawson said. “You see this play out in the run game and pass game, but I think it highlighted in the pass with guys on both sides of the line; how [offensive linemen] set and punch to try and block the pass rusher, and how the pass rusher tries to attack the OL and also set up moves that he can use later.”

Understanding the qualities of play in the trenches is especially critical for appreciating the greatness of teams like Alabama and Georgia, both of which built their success around their lines.

Statistics omit a critical part of the story when evaluating the role of a player like Georgia defensive tackle Jordan Davis.

Cameras are primarily tasked with tracking the ball, limiting the scope of what the viewer sees. A critical element of the Film Room broadcast is its use of an All-22 angle that captures every player on the field.

ESPN offered an All-22 telecast for the Cotton and Orange Bowls, encroaching on territory coaches have not always been comfortable allowing outsiders.

“While not an issue at the NFL level due to Gamepass [the NFL’s premium streaming service], I do think there is hesitation on the college level,” Lawson said. “I just don’t understand why. … Opponents get your film whether you like it or not, so secrecy when it comes to All-22 has never made much sense to me.”

Perhaps the influence TV holds over college football will be pressure enough to make All-22 more available.

Patrick Mayhorn, a editor and reporter for BuckeyeSports.com and co-host of the Flipping The Field podcast, is among the more outspoken advocates for expanded All-22 broadcasts in college football.

“The standard broadcast camera just hides so much of what’s happening in the game, especially defensively. There’s a fan (and even a media) instinct to rely on counting stats when judging defensive quality, and I think it’s a direct result of no one being able to see what’s actually happening on that side of the ball,” he said. “It’s the same thing with offense, just to a lesser extent. Everything is grouped together as ‘spread offense’ because it’s impossible to see routes and plays developing.

“College football looks pretty much the same when you can only see the backfield, and a wider view would both diversify what people are seeing and would, fingers crossed, help develop a better knowledge across the board of how the game actually works,” he said.

Combine more revealing camera angles with qualified teachers guiding the audience through what they’re seeing, as ESPN has mastered with the MegaCast Film Room, and the potential for creating savvier football fans increases exponentially.