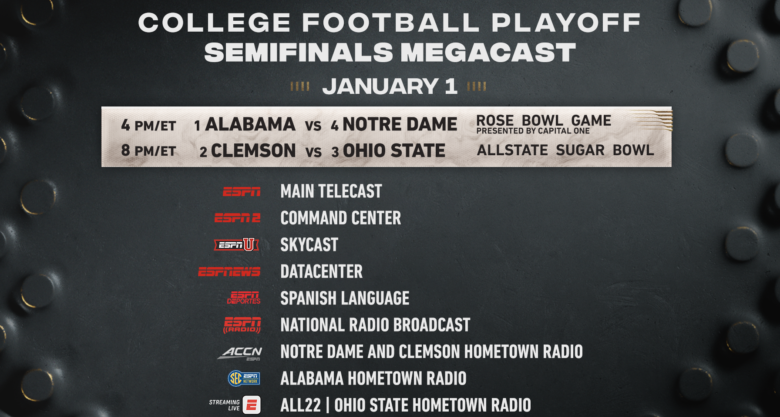 ESPN will again be doing a Megacast of different feeds across their network for this year’s College Football Playoff semifinal games on New Year’s Day (Alabama-Notre Dame in the relocated Rose Bowl at 4 p.m. ET from Dallas, then Clemson-Ohio State in the Sugar Bowl at 8 p.m. ET from New Orleans). And this year’s Megacast feeds look a lot like what they did for the semifinals last year, with Command Center, DataCenter, Skycast and All-22 views returning. But one notable omission is the always-popular Film Room feed, which has produced some of the best reviews and most entertaining moments in many past college football games.

Film rooms of some sort have always been a part of the college football Megacast philosophy to this point. In the 2019-20 season, the semifinals had a film room on ESPNU that featured ESPN analysts, with Tom Luginbill and Louis Riddick featured for one semifinal and Emmanuel Acho and Bobby Carpenter featured for the other. Current coaches were featured for the 2020 championship game, and for the semifinals in 2018-19. But the 2019 championship game saw a Monday Night Football film room with the then-MNF cast of Joe Tessitore, Jason Witten and Booger McFarland instead.

There were also Megacasts for the semifinals in 2017-18, 2016-17 and 2015-16. The latter was the first year to feature semifinals Megacasts, and while it had a Finebaum Film Room rather than a regular one, that did involve former Missouri coach Gary Pinkel. The CFP championship game in 2015 and 2016, the 2014 BCS Championship Game (the first Megacast of any kind), and the 2014 Iron Bowl (also a Finebaum Film Room) also featured some version of a film room on their Megacasts.  And there were even coaches’ film rooms on regular-season opening broadcasts in 2018 and 2017. Yes, some of those broadcasts featured coaches-turned-analysts and/or analysts without a coaching background, but they all featured a film room of one variety or another. So it’s certainly different to have a Megacast with no film room.

Of course, the COVID-19 pandemic might have made a coaches’ film room difficult to safely implement if the coaches were in the same room. But there have been plenty of remote broadcasts this year, including a Monday Night Football “Megacast” (across only four networks, two of which normally carry the game) that saw Rece Davis contributing from Bristol, Kirk Herbstreit contributing from his home in Tennessee, and Nashville, and guests popping in from other locations.  So it would have seemed possible to do a virtual film room of some sort, and it’s interesting that ESPN has chosen not to for these semifinals. Perhaps they’ll alter that decision for the CFP final on Jan. 11.

At any rate, here are the details of the “alternate presentations” ESPN will be offering on Jan. 1, from their release (also seen above):

That’s basically what we saw for last year’s semifinals, except with Skycast moved from app-only to ESPNU in place of the film room. All of those alternate broadcasts will be available on the ESPN app, so there will be plenty of options for viewers to check out. And there will be some alternate commentary options as well; the main broadcast feeds will feature Sean McDonough, Todd Blackledge, Todd McShay and Allison Williams for the relocated Rose Bowl and Chris Fowler, Kirk Herbstreit and Maria Taylor and Tom Rinaldi for the Sugar Bowl, but there will also be the ESPN Radio call (Joe Tessitore, Greg McElroy and Holly Rowe for the relocated Rose Bowl, Sean Kelley and Barrett Jones for the Sugar Bowl) and teams’ hometown radio feeds synced up with the game on ACC Network (Clemson and Notre Dame), SEC Network (Alabama) and the ESPN app (Ohio State). So there are plenty of ways that fans can watch or listen to these games. But the Film Room concept isn’t one of them this time.