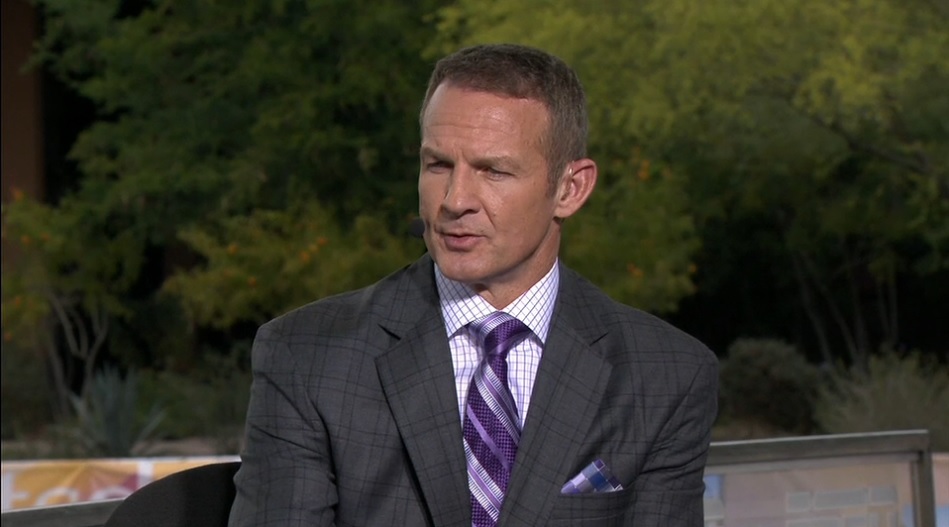 Plenty of ESPN personalities laid off in April have found interesting new jobs, from Jaymee Sire reporting on Food Network’s Iron Chef Showdown to Scott Burnside working for the Dallas Stars to Paul Kuharsky starting his own subscription site to Andy Katz signing on with Big Ten Network, serving as the in-stadium host for UConn football, and writing for NCAA.com, but Merril Hoge has found one of the most unusual yet.

On Tuesday, “gaming technology startup” Your Call Football announced that Hoge is joining them as a head coach, and will hire assistants and build a roster to compete against their other head coach Mike Sherman (a former head coach with the Green Bay Packers and Texas A&M who’s had plenty of other coaching stops, and whose hire was announced last month). So why is a gaming startup creating football teams? To let fans call plays:

YCF will completely change how fans enjoy football by giving them control of a live, broadcasted game. YCF’s patented technology allows fans — who download the YCF app — to control the action on the field by voting on a selection of plays chosen by coaches like Hoge and Sherman, then watch as those plays are executed, live on the field by YCF professional players. Fans will accumulate points based on their play-calling skills and compete with other fans to prove who is a more skilled play-caller. In addition to bragging rights, fans will compete for cash prizes provided by YCF.

“We are thrilled that Merril Hoge is bringing his wealth of football experience and knowledge to YCF,” said Julie Meringer, president of Your Call, Inc. “Whether running plays or breaking them down on TV, Merril has shown a real passion for the intricacies of play calling. That he’s also embraced the innovation that is YCF makes him an ideal coach to lead this revolution in the fan experience.”

Boston-based Your Call Football has made headlines before, announcing back in May they’d serve as the title sponsor of the Fenway Gridiron Series this November (college and high school teams playing at Fenway Park). It’s interesting to see an app sponsor something before the app even launches, but that probably helped get the concept out there a little bit, and the idea was to have fans at those games check out the technology. They also announced their leadership (president Julie Meringer, vice president of marketing Sue Develin and chief legal officer Susan Maffei) back in June.

But Hoge’s hire is particularly interesting; Sherman’s notable too, but he’s been pretty off-the-radar since the Miami Dolphins fired him as offensive coordinator back in January 2014, spending a couple of years working as a high school coach in Massachusetts. Hoge is pretty well-known; he worked for ESPN from 1996 through this spring, when he was reported as one of the ESPN layoffs. He doesn’t have much experience as a coach or GM, so we’ll see what kind of a team he builds, but bringing him in should give this startup some more attention.

The big question is how this concept will actually work, and how much attention it will get. There’s some obvious surface-level appeal to fans voting on plays, but will serving as a very small part of crowdsourced playcalling for players not in a high-profile league actually be something people want to watch and do regularly? We’ll have to wait and see. But a hire like Hoge should give Your Call Football a little more attention to start with. And it certainly marks an interesting post-ESPN career move for him. Maybe he’ll even prove to be a better coach than former colleague Herm Edwards.