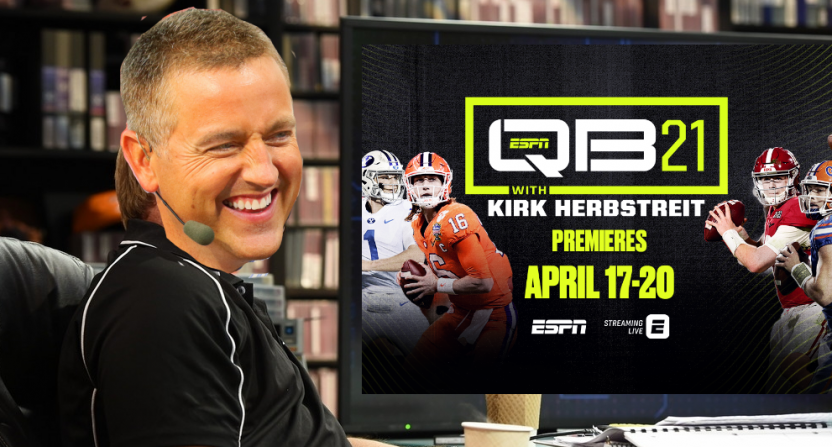 Fans who have missed Gruden’s QB Camp leading up to the NFL Draft will get a new opportunity to learn more about the top quarterback prospects before Roger Goodell calls their name on April 29 (maybe April 30) in Cleveland.

The first three episodes will air on ESPN and feature Clemson’s Trevor Lawrence (expected to be the No. 1 overall selection), Mac Jones of Alabama, and Ohio State’s Justin Fields, respectively. Herbstreit’s conversation with Lawrence will air at 12:30 p.m. ET, with Jones following at 3 p.m. and Fields at 3:30 p.m.

ESPN2 will broadcast the next three episodes. On Monday, April 19, Florida’s Kyle Trask will be featured at 7 p.m. ET, followed by Trey Lance of North Dakota State at 7:30 p.m. The series concludes the following night with BYU’s Zach Wilson (expected to go No. 2 overall) in the spotlight on Tuesday, April 20 at 9 p.m. ET.

"My goal was to dive into the personal aspect…how they're wired, what makes them tick." – @KirkHerbstreit

For those who prefer QB21 in one viewing, a compilation of all six interviews will air on ABC Sunday, April 18 at 2 p.m. ET. The episodes will also replay frequently on ESPN networks leading up to the NFL Draft, including Jones and Trask’s conversations showing on SEC Network and Lawrence on ACC Network.

QB21 won’t be an updated version of Gruden’s QB Camp with Herbstreit watching film with the players, asking them to diagram or call plays on a whiteboard, or prompting them to finish his sentences on football philosophy and leadership. Herbstreit isn’t a coach, nor someone who evaluates draft prospects, so this will be more about letting the quarterbacks tell their story to viewers.

Related: The loss of Gruden’s QB Camp is bigger than not having Jon Gruden on Monday Night Football

“When I thought about the approach for this series, my goal was to dive into the personal aspect of these six NFL prospects: how they’re wired, what makes them tick, and the personal challenges that they’ve had to deal with as an athlete,” Herbstreit said in ESPN’s official announcement.

“So each conversation is all-encompassing; about trying to get to know them from the very beginning, as early as we could go back, all the way to where they are now, on the cusp of their lives changing.”

Former NFL players will also appear in some episodes of QB21. Peyton Manning will be a part of Trask’s episode, while Steve Young will discuss fellow his fellow BYU quarterback when Wilson is spotlighted. Fields’ episode will feature an appearance from Ohio State Heisman Trophy winner Eddie George.