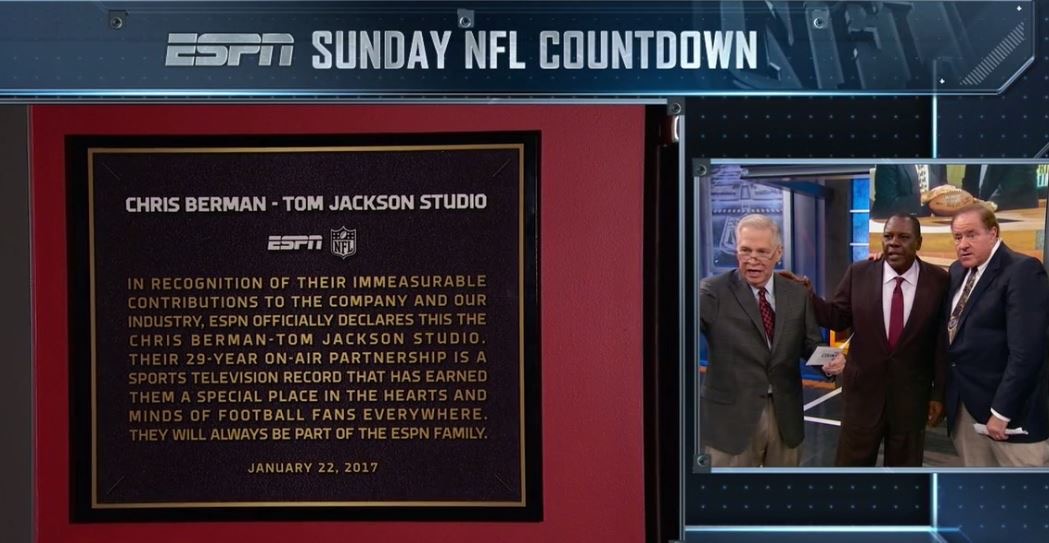 With this being the last season for Chris Berman as NFL studio host, ESPN has decided to ensure that his and co-hort Tom Jackson won’t be forgotten. This was the last Sunday afternoon that Berman would be hosting an NFL pregame show from the ESPN studios.

Next week, he’ll host the Pro Bowl in Orlando and then the Super Bowl in Houston. So ESPN brought in Chris Mortensen and Tom Jackson to surprise him:

And it was an emotional moment for everyone involved:

Special moment here in Bristol. Chris Berman had no idea @mortreport & @TomJackson57 would be in Bristol. Standing O from our ESPN crew. pic.twitter.com/0FLUTsseJ9

ESPN President John Skipper was quoted in an official statement on the honor for Berman and Jackson:

“They are a one-of-a-kind duo. This is an unprecedented honor from ESPN that was earned with creativity, personal dedication and preparation from Chris and Tom and awarded with joy, pride and appreciation. Well done and thanks, Boomer and TJ.”

Berman and Jackson worked together for 29 years on Countdown and on NFL Primetime. Their partnership ended before the season and Berman worked with an entirely new cast of analysts for 2016-17. This will mark his final season as host of the NFL and he’ll become a host emeritus once this season is over.