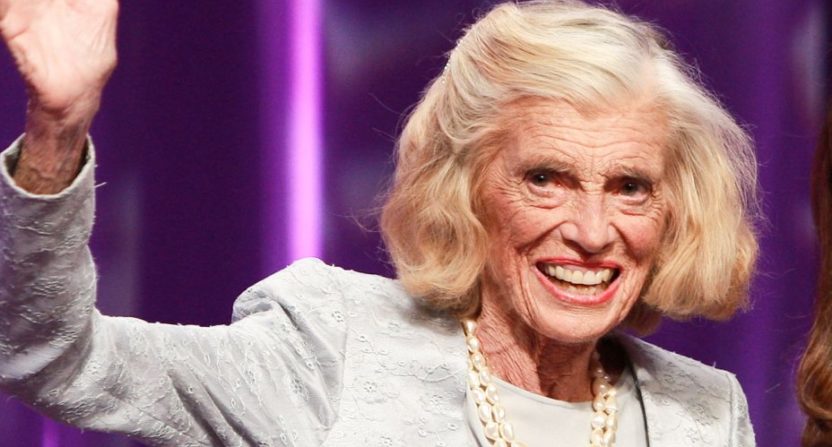 The 2017 ESPYs (airing July 12 on ABC) will honor Eunice Kennedy Shriver posthumously with this year’s Arthur Ashe Courage Award for her work in creating and running the Special Olympics. Shriver, who passed away in 2009, grew up alongside sister Rosemary who had intellectual disabilities, and that led to her lifelong work as an advocate for children’s health and disability issues. She founded Camp Shriver in 1962 as a summer day camp on her Maryland farm for those with intellectual disabilities, and it soon evolved into the Special Olympics. The first international Special Olympics Games took place in Chicago in 1968, with 1,000 athletes from 26 states and Canada, and it’s since turned into a year-round movement with 5.3 million athletes in over 170 countries, over a million coaches and volunteers, and over 108,000 competitions annually. Here are some quotes from the release on why ESPN chose to recognize Shriver and the Special Olympics this way:

“My mother, Eunice Kennedy Shriver, was a visionary, but, more importantly, a revolutionary,” said Timothy Shriver [the current chairman of Special Olympics] on behalf of the Shriver family and Special Olympics. “Fueled by love and anger, she used sport to break down the barriers, she used fields of play to bring people together, and she opened the doors of inclusion and equality to the most marginalized on Earth. It is now up to all of us to follow the athletes of Special Olympics who can teach us all to accept and include each other.”

…Throughout her life, Shriver was a tireless advocate for children’s health and disability issues. In 1984, she was honored for her work with the Presidential Medal of Freedom by President Ronald Reagan. Shriver passed away on August 11, 2009, but her legacy lives on through Special Olympics, which will mark its 50th Anniversary next year.

“The effort that Eunice Kennedy Shriver and her family have been displaying for these past five decades is truly remarkable,” said ESPYS executive producer Maura Mandt. “We are honored to celebrate Eunice’s work and the bravery of the athletes of Special Olympics, whose efforts and performances are as inspiring as any of those we celebrate on this show. It’s stories like this one that show what the The ESPYS are really about.”

Added Connor Schell, ESPN senior vice president and executive producer, original content, who oversees The ESPYS: “Eunice Kennedy Shriver’s legacy is remarkable, far-reaching and still growing. As a proud global supporter of Special Olympics for over 35 years, ESPN has had the privilege of showcasing a small slice of her work to fans and families around the world, allowing many of us to witness first-hand the incredible impact she has had on millions of people.”

From this corner, Shriver seems like a worthy Ashe honoree given the work she did in creating and building up the Special Olympics, and given the many other important causes she was involved with. However, she was from a very prominent Democratic political family (her brothers included President John F. Kennedy and senators Robert F. Kennedy and Ted Kennedy, and her husband, Sargent Shriver, was ambassador to France in the Lyndon Johnson administration and an unsuccessful Democratic vice-presidential nominee in 1972), and so some of those pushing the “ESPN is super liberal” narrative might lob some further shots at them over this. “Look at them, honoring a Kennedy!”(Shriver’s daughter, Maria, is married to but separated from former Republican governor Arnold Schwarzenegger, but that probably isn’t enough to remove her from the “liberal” camp.) ESPN’s Ashe decisions (and other ESPY decisions) have taken political heat from the right wing before, particularly with the selection of Caitlyn Jenner in 2015 (never mind that Jenner has frequently stated she’s a Republican), and that could happen again here. That’s not saying that ESPN shouldn’t have selected Shriver, just that it may cause some blowback.

Perhaps the more curious aspect of this is the timing. Why choose this particular year to honor Shriver? If they’d waited for next year, they could have tied it into the 50th anniversary of Special Olympics. And there doesn’t appear to be anything in particular making the organization especially newsworthy this year. Was this just a “Well, we didn’t see anything particularly great this year, so let’s go with someone who’s done great things in the past” pick? If so, fair enough. But it can be a little less obvious that’s what you’re doing if you time it to coincide with an important anniversary. In any case, ESPN’s made their pick, and it’s not a bad one; Shriver did a lot to create and boost the Special Olympics. But it will be interesting to watch the reaction.