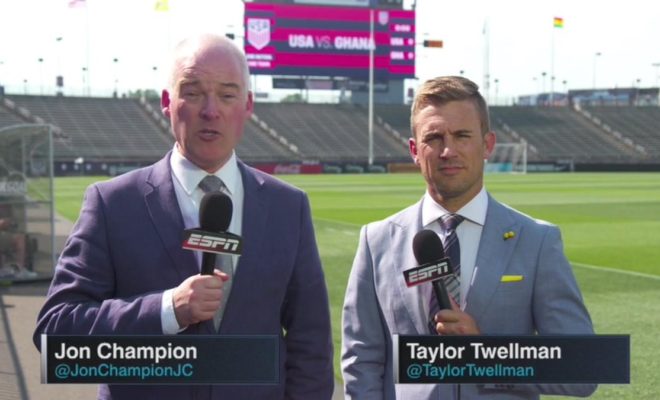 Jon Champion is well known in soccer circles. His voice has been heard around the world on English Premier League games and on ESPN’s coverage of the World Cup in 2014. American soccer fans will be hearing a lot more of him soon, especially on Major League Soccer. ESPN announced on Monday that they had hired Champion to be its main MLS voice beginning in 2019, replacing Adrian Healey. As a result, he’ll move the United States in early 2019 from the United Kingdom.

The move means that it’s likely that Champion won’t be calling Premier League games, perhaps except during the MLS offseason in the winter. In its announcement, ESPN said that this will be Champion’s second stint as ESPN’s main soccer voice:

He was ESPN UK’s lead football announcer, covering the English Premier League, UEFA Europa League and the FA Cup Final from 2009-2013. Champion currently lives in the United Kingdom and will soon relocate to the United States with his family for this new, multi-year assignment.

“I am thrilled to be joining ESPN on a full-time basis to cover MLS and the other soccer properties now in the company’s growing portfolio,” said Champion. “It’s a big adventure to move my family to the U.S. and a significant personal challenge after more than 30 years of covering the sport in Europe. I’ve really enjoyed working on MLS on my frequent visits and now I get the chance to call the matches on a weekly basis and to relate the whole story as the league enters an exciting phase of its development.”

Champion will be teamed on MLS with top analyst Taylor Twellman and as a result, will take over for Adrian Healey. However, Healey will remain with the network as part of ESPN’s stable of soccer broadcasters.

Twellman himself paid tribute to Healey:

I’ve thoroughly enjoyed working next to @AdrianHealey nearly every weekend for the last 7 years. He will continue to be a great voice for us here @ESPN and looking forward to our next game again.

ESPN continues to be home to some of the best soccer announcers in the world, including Ian Darke, Champion, and Healey.

Champion began his career with BBC Radio covering World Cup games, and then went to TV calling games on BBC’s iconic “Match of the Day” series. He then moved to ITV in 2001 and was signed by ESPN in 2009.