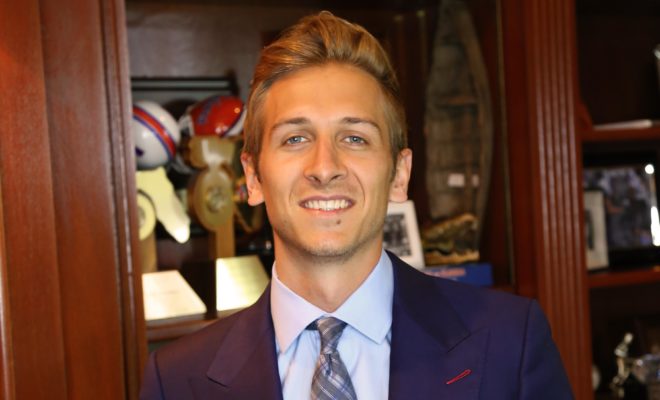 ESPN has hired a new reporter for Sunday NFL Countdown, and his last name will sound awfully familiar.

The younger Collinsworth is fresh out of Notre Dame, but he has a pretty impressive resume. He covered the Fighting Irish for a number of different outlets, including as a sideline reporter on NBC broadcasts, he co-hosted a radio show on SiriusXM and he served as NBC’s social media correspondent during the 2016 Olympics in Rio de Janeiro, all before graduating college.

Via an ESPN release:

“The quality of work that Jac has produced in such a short time is impressive. To find someone right out of college with his skillset and media experience is rare,” said Seth Markman, senior coordinating producer for ESPN’s NFL studio shows. “He’s going to bring a lot of ideas to Countdown and he will have a special connection to today’s NFL stars, as well as our viewers.”

Collinsworth added: “Within my first hour at ESPN, Seth Markman and [coordinating producer] Greg Jewell started discussing story ideas. If it were up to me, I would have slept on the floor and started working in the morning. I connected with the energy and passion on Bristol’s campus instantaneously.”

Obviously Collinsworth isn’t hurt by having a famous dad who presumably put in a good word for him at NBC, but before you cry that Jac got this job only because of who his daddy is, consider that ESPN isn’t NBC and has very little to gain by giving away a high-profile gig to someone who hasn’t earned it. Clearly Jac has demonstrated some pretty exceptional talent or else he wouldn’t have received nearly this many opportunities.