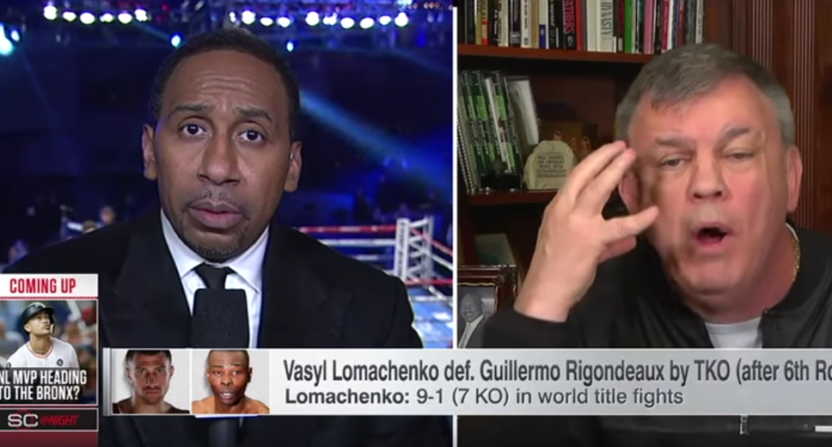 Boxing has become a larger priority for ESPN recently, with the network highlighting their recent four-year Top Rank deal as key to their programming in a “You need a backbone to stand tall” section of their year-in-review release and even giving a Top Rank fight the coveted post-Heisman slot usually reserved for special 30 for 30 documentaries.

But, as boxing grows at ESPN, one of their most well-known boxing voices appears to have been taken off their live fight coverage. That would be analyst Teddy Atlas, and it may be thanks to critical comments he made on a couple of recent fight broadcasts.

Lance Pugmire of The Los Angeles Times has more:

Atlas, reached by telephone Wednesday, was asked whether he’ll return to live fight analysis on the network for which he has worked for 21 years.

“Doesn’t look like it, at least from what I understand is the decision,” Atlas said. “It wasn’t my decision.”

…According to two individuals familiar with Atlas’ situation but unauthorized to speak publicly on the matter, the decision to remove him from live broadcasts was based on his comments in two ESPN Top Rank cards this year.

…In Manny Pacquiao’s upset loss to Australia’s Jeff Horn in a welterweight bout in July in Brisbane, Atlas harshly criticized the judging.

“They gave [Atlas] a bunch of chances,” one official said. “The Fresno show was terrible. He was terrible to Kriegel and it was the straw that broke the camel’s back.”

It may have been the arguments with Kriegel that really did it, as ESPN-on-ESPN crime is often frowned upon at the network, especially when it comes to comments made on the air. And, if they’re going to punish everyone who went after the judging in Pacquiao-Horn, they’d have to go after Stephen A. Smith too, considering that he demanded mugshots of the judges.

But Atlas was very over-the-top there too (as he has been in other conversations with Smith, including the one after Mayweather-McGregor and the one after Canelo-GGG), and inconsistent discipline is an on-record company policy at ESPN, and Smith and his hot takes are often given more latitude than most others get.

This doesn’t mean that Atlas is leaving ESPN. In fact, he was still involved as a studio analyst both before and after Saturday’s Vasyl Lomachenko-Guillermo Rigondeaux fight (where, unsurprisingly, he wound up in another yelling match with Smith, as seen above). And Atlas told Pugmire he’s still under contract for three years at ESPN; executive vice-president (programming and scheduling) Burke Magnus told Pugmire Atlas is under contract for two years, but regardless, he’s there for a while. The statement Pugmire got from ESPN’s Stephanie Druley (senior vice-president, event and studio production) suggests they still plan to incorporate him regularly, too, even if not on ringside coverage:

“Teddy’s expertise and knowledge of boxing is unparalleled and he will continue to be a part of our boxing coverage.

“As we embark upon a new approach with boxing, we are also going to utilize different talent lineups. For example last week, Teddy contributed a feature on Vasiliy Lomachenko; he will continue to contribute to boxing across our platforms.”

Maybe Atlas will still be able to show up elsewhere, too, like, say, college football megacast feeds. But his comments to Pugmire show he isn’t happy about this change, and there may be some aggravated boxing fans too. Atlas has been an important part of ESPN boxing coverage for decades, and is heavily identified with the sport at the network. Pulling him from ringside coverage, and doing so reportedly because he didn’t play nice with another analyst and/or because he criticized judging, isn’t going to go over well with many.

And disciplining an ESPN analyst for criticizing a colleague is one thing, but punishing an analyst for bashing the officiating would be a whole different level of problematic, especially for an event where ESPN has a rights deal with the promoter. That could bring up some of the ongoing debates about ESPN’s business interests and their on-air coverage. We’ll see where this situation goes from here.