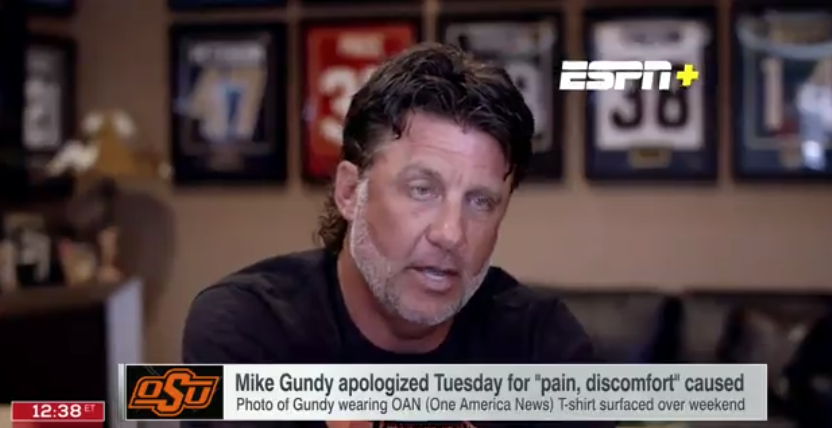 One of the biggest stories in the sports world this past week has been the uproar and subsequent damage control over Mike Gundy’s recent attire choice of an OAN t-shirt. Gundy had previously commented on his new affinity for the network in April, saying he found the network refreshing in that “They just report the news. There’s no commentary. There’s no opinions on this.”

While Gundy may have been obtuse to OAN’s reputation as a fringe right wing conspiracy theory pushing outlet, his players were certainly aware of it, especially in light of how the network has treated the Black Lives Matter movement.

It seems a lot of you don't quite understand why a major college football coach promoting OAN is a problem.

After multiple players vocalized their concerns with Gundy being so publicly smitten with OAN, Gundy has attempted to quell their criticism with a pair of videos, both of which were panned as missing the mark. Last night, a third attempt of Gundy explaining his viewpoint and apologizing has surfaced, and the origin of that apology is quite interesting.

On Wednesday night’s edition of SportsCenter with Scott Van Pelt, this clip was played, explaining that Gundy gave another explanation and apology for a yet to air (and yet to be announced) all-access show that ESPN was filming with the Oklahoma State football team.

This is a bit more of a substantive apology from Gundy when compared to the other two whiffs, making it more newsworthy. To this point, SportsCenter has frequently been airing the apology today.

While we only see Gundy in the clips above, the SportsCenter host who has teased the clips each time has said that Chuba Hubbard, one of the players who voiced his displeasure with Gundy, has also been participating in the show. While the Oklahoma State series hasn’t been announced by ESPN quite yet, we’re being told that this series is meant to mirror Miles To Go, an ESPN+ all access program that followed the Kansas football team last season.

Miles To Go was announced in mid-July last year before premiering in August and running the length of the season. These type of series are part of ESPN’s larger deal with the Big 12, which was recently expanded to ESPN+.

It will be interesting to see if ESPN does indeed wait until August to start airing episodes of the yet-to-be-named Oklahoma State series, given the amount of interest in the program at the moment and Gundy’s strained relationship with his players. If the story does die down, then perhaps we’ll see the series announced next month and beginning to air in August, which we imagine was the intended plan. However, if more stories continue to come out of Oklahoma State in the coming days and weeks, you’d wonder if there may be a change of plans, especially if (for example) a slew of players decided to leave the program, or if Gundy or other members of the football staff were relieved of duty. Either way, ESPN’s decision to film at Oklahoma State is already proving to be an inspired choice.

But until then, this is somewhat of an odd situation for ESPN, since they have inside access to potentially one of the more significant non-COVID stories of 2020 and are sitting on so much access and footage. However, the network can only squeeze out a few morsels here and there until the show is both announced and airs. For ESPN ,it’s rather fortuitous scenario, given the limited interest these college all access programs have garnered, regardless of the network (ESPN+, HBO, Showtime) the series airs on. With the Gundy situation becoming a huge story this week, generating interest beyond just Oklahoma State or college football fans, you’d have to think ESPN is beginning to consider ways to increase both awareness and distribution for the show. Regardless of how ESPN handles the Oklahoma State situation, it’s pretty clear that between this series and Hard Knocks, networks filming all access series with football teams have not yet been particularly deterred by the pandemic.