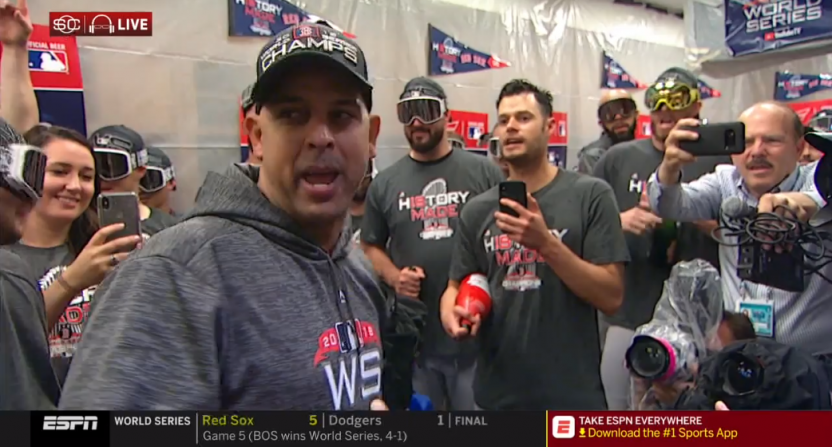 For the fourth time since 2004, the Boston Red Sox are World Series champions after beating the Los Angeles Dodgers 5-1 in Sunday night’s Game 5.

After the game, Red Sox manager Alex Cora met with the team in the locker room, and ESPN decided to go live to Cora’s speech during SportsCenter with SVP.

Just over 30 seconds later, a screaming “FUCK YEAH!” from at least one Red Sox player (or coach etc) was heard loud and clear on ESPN.

ESPN surely knew f-bombs or some sort of vulgar language would be heard on this live feed. Scott Van Pelt even said as much:

“There was a 1,000 percent chance someone was going to cuss. 1,000 percent. I mean it’s after midnight, unless you’re out at west, and if so it’s cable and we’re sorry. The minute you open up the mics you get what you get.”

And he’s exactly right with his point: it’s late night, on a Sunday night (and early Monday morning on the east coast). Are many viewers going to care about an f-bomb from an ecstatic baseball team that just won a World Series? No. The response to this topic from most viewers (and most of you that are reading this) would be, “Who cares?”

So, the point of this post isn’t to criticize ESPN for letting an f-bomb on TV when they should’ve “1,000 percent” seen it coming as SVP correctly said. It’s a post commending ESPN for not being afraid to show a very cool live moment of a team celebrating a championship, while being fully aware some adult language could/would likely come with it.