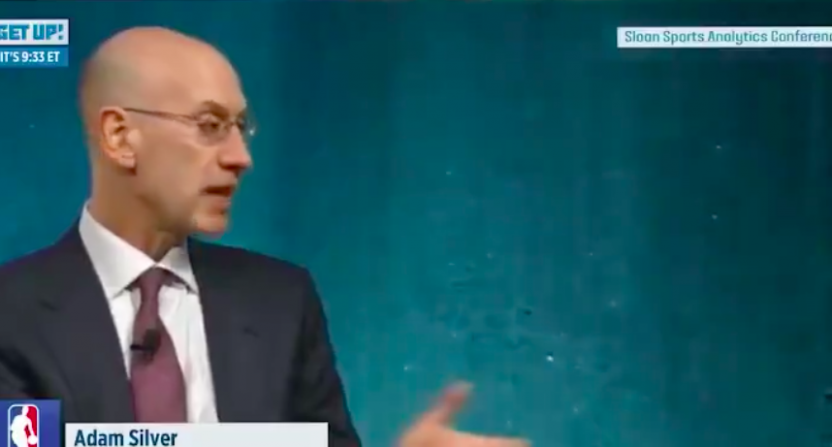 One day we will all tell our grandchildren about The Great ESPN – Bill Simmons War of the 2010s. No one denies this! But every time we think this he-said-corporate-behemoth-said candle has burned out for good, along comes another petty move from one side to ignite the flame once more.

Just to catch you up, Simmons acrimoniously left ESPN in 2015 and made plenty of highly critical comments about the network afterward, eventually calling his exit “f***ing shitty.” At the time, ESPN reportedly banned its employees from appearing on Simmons’ podcasts and his Any Given Wednesday HBO show. In the year since as Simmons started The Ringer, cooler heads prevailed and he even made a return to ESPN’s airwaves as a guest in 2018. Time heals all wounds.

Well, maybe not, presuming that someone at ESPN purposefully decided to cut Simmons out of his own interview during Wednesday’s episode of Get Up.

[Update: ESPN’s now issued a response, which you can find at the end of this post.]

Over the weekend, Simmons interviewed NBA Commissioner Adam Silver at the Sloan Sports Analytics Conference. The noteworthy piece that came out of the interview was Silver’s comments on the ways that some NBA players feel isolated and alone due in part to social media.

Adam Silver on the "unhappiness" of NBA players caused by social media and being isolated is very interesting and worth a listen. pic.twitter.com/tRhTB7n0F2

On Wednesday’s episode of Get Up, Charles Barkley was discussing Silver’s comments when a brief clip of the commish speaking showed up on screen. What’s weird, though, was that the clip had been deliberately zoomed in on Silver, presumably to cut Simmons out of the shot. And if you don’t think Bill noticed himself being erased from the story, well, you haven’t been following his work.

2-min Mark… Incredible CGI efforts by “Get Up” to cut me out of last Friday’s Adam Silver interview. They should have just replaced me with a hologram of Rachel Nichols. Come on @jalenrose defend your boy. 😂https://t.co/wgfkfpTc1a

The fact that you still hear Simmons say “yes” in the clip makes it even sillier. Twitter user David Astramkas even went to the trouble of putting the original and zoomed clip together to show just how weird the move was.

ESPN removed @BillSimmons from this morning's episode of @GetUpESPN

This ranks up there with Henry Cavil's mustache in JLA pic.twitter.com/4nkuB39IMG

The whole thing is reminiscent of the time that ESPN blurred out Simmons during an NBA Countdown intro. Though, in that case, it was done with Simmons’ knowledge as a joke. This time, not so much.

In the annals of this great feud, it’s not exactly a missile launch, but it is certainly the kind of thing that Simmons is going to remember. As the sports media version of The Grudge, he never forgives and he never forgets. So get ready to see some kind of petty payback coming soon to The Ringer or social media.

To paraphrase Ferris Bueller, it’s a little childish and stupid, but then, so is the sports media world.

Update: ESPN responded Thursday to Richard Deitsch of The Athletic:

A statement from ESPN PR on Bill Simmons/Get Up:

“There is absolutely nothing to this. It’s a non-story. We ran clips of Adam Silver with Bill Simmons on ESPN shows/platforms.”

They sent along this handsome screen grab as part of the response. pic.twitter.com/A39iR43v2V