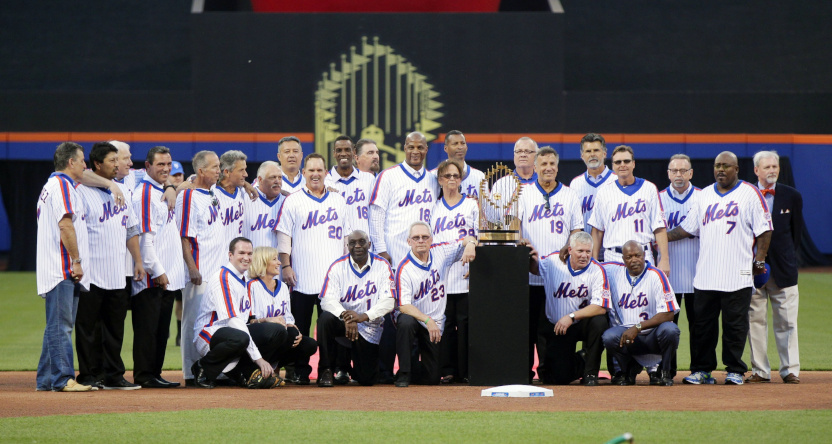 ESPN Films announced last July that a ’30 for 30′ docuseries on the 1986 New York Mets was in the works, and more details were released about the series on Tuesday.

ESPN sent out a tweet on Tuesday that includes the title of the series, which is Once Upon a Time in Queens. While there’s no official premiere date, ESPN says in the tweet that the series is “coming soon.”

And Variety reports that Once Upon a Time in Queens is a four-part series. It made all of the sense in the world for ESPN to want more multi-part series about popular sports teams following the remarkable success of The Last Dance — a 10-part series — last summer.

ESPN’s tweet has photos — that appear to be interviews or never-before-seen footage from the series  — of nine members of the ’86 Mets: Darryl Strawberry, Keith Hernandez (current Mets broadcaster), Dwight Gooden, Bobby Ojeda, Gary Carter (the Hall of Famer passed away in 2012), Mookie Wilson, Wally Backman, Lenny Dykstra, and Kevin Mitchell.

“Once Upon a Time in Queens” @30for30 coming soon ? pic.twitter.com/KULd7BQmPm

The ’86 Mets won an MLB-best 108 games that season, and took down the Boston Red Sox in seven games in the World Series. The best-known moment — featuring the great Vin Scully on the call — is of course the Wilson groundball that went through the legs of Bill Buckner to give the Mets a walk-off victory in Game 6.

And along with the fact that the ’86 Mets were a championship team, they were a highly interesting group featuring plenty of fascinating characters. Variety reports that Once Upon a Time in Queens will feature “hours of never-before-seen footage of the team,” so you can be sure we’ll get plenty of entertaining moments in there like The Last Dance showed us of the 1990s Chicago Bulls.

Once Upon a Time in Queens is executive produced by Jimmy Kimmel, Sal “Cousin Sal” Iacono (Kimmel’s cousin and co-host of FS1’s Fox Bet Live), Kimmelot’s Scott Lonker, ITV’s Jordana Hochman, and MLB’s Nick Trotta. It’s directed and produced by Nick Davis (who did the same for Ted Williams: “The Greatest Hitter Who Ever Lived”).

ESPN surely wouldn’t say that Once Upon a Time in Queens is “coming soon” unless it’s indeed arriving on ESPN and ESPN+ within the next few months. Expect a premiere date and more details to emerge in the coming weeks.