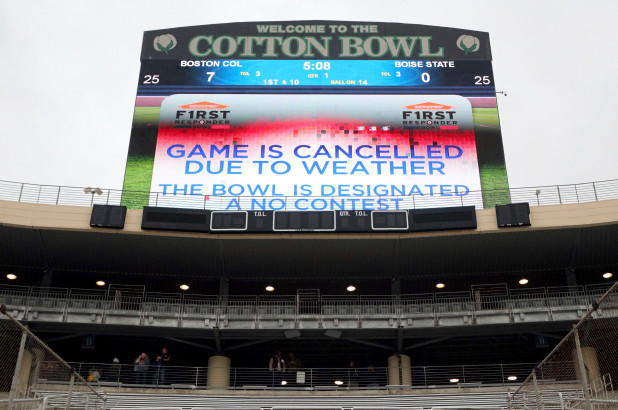 People love to crack jokes about the unnecessary nature of college football bowl games. They’ll say that, aside from the College Football Playoff, they’re all glorified exhibition games that exist to make money for rich people and sell sponsorships to weird companies you’ve never heard of (and even a town you’ve never heard of). Another common refrain you’ll hear is that if weren’t for ESPN, most of these games wouldn’t even exist.

That last one is actually literally true. One way or another, ESPN has a hand in just about every postseason college football game that exists. A large part of that is the fact that the network actually owns a bunch of these bowl games. ESPN Events, an event promoter owned by ESPN, owns and operates 14 bowl games (Armed Forces Bowl, Birmingham Bowl, Bahamas Bowl, Boca Raton Bowl, Camellia Bowl, Celebration Bowl, Famous Idaho Potato Bowl, First Responder Bowl, Frisco Bowl, Gasparilla Bowl, Hawaii Bowl, Las Vegas Bowl, New Mexico Bowl, and Texas Bowl). They’ll be adding a 15th to their roster next season with the arrival of the Myrtle Beach Bowl. You can expect them to add more as well.

When asked by USA Today if there are too many bowl games as it is, vice president of events for ESPN Events Clint Overby was pretty clear that the answer is no. “What does it ultimately matter if there’s quote-unquote too many games? As long as there’s interest and people want to play in them, and there’s a perceived value, then really it’s a net positive for the sport. The number of games is really not the issue.”

So that’s why millions of college football fans gathered around their TVs, phones, and computer screens on Wednesday to watch the First Responder Bowl between 7-5 Boston College and 10-3 Boise State. Because the demand is there and ESPN is more than happy to meet it. And that’s also why millions of college football fans were left without a First Responder Bowl to watch after a two-hour weather delay and eventual cancellation.

The @FRBowl has been canceled.

Canceling a bowl game just like that felt like a pretty new experience for college football fans (though technically there are examples of bowls and bowl-esque games being called off in the past).

Canceling a bowl game is a big deal. Two universities spent a lot of money to bring their entire football team and staff down to Dallas. Thousands of fans also made the trek, spending large sums on flights, hotels, and food. Not to mention the money spent promoting the game, stadium operating costs, and so many other considerations.  Naturally, it left people wondering just how the decision was made (and why they didn’t seem to consider the possibility of playing the game later or the next day).

As you’ve probably gathered by now, ESPN, who owns the bowl game and was broadcasting it on their network, was central to that decision.

“After more than an hour since stoppage of play, and with review of the active lightning and thunderstorm cells still in the area of the Cotton Bowl, it was determined that the game should be called,” said Pete Derzis, ESPN senior vice president of ESPN Events and programming, in a release. “All parties were concerned about player safety first and foremost, and with that being the primary concern, as well as the fans in attendance, it was a unanimous decision to cancel the game.”

Brant Ringler, the bowl’s executive director, added that “the decision was made after lengthy consultation with emergency personnel, both universities, ESPN and Cotton Bowl Stadium staff.”

In a way, ESPN’s overall involvement with the game had to have made it easier to cancel outright. The network has already made its sponsorship money on this particular game. And any losses will be offset by the solid ratings and revenue generated by the other 13 bowl games they’re overseeing. They couldn’t really play the game later because that space on their networks is already spoken for, and the extra costs incurred by keeping everyone in town an extra day or two wouldn’t have been worth the payoff. Bowl games are a bundled deal for ESPN and this one wasn’t particularly important enough to mess with that. Besides, whatever revenue they miss out on here will be more than made up for in their College Football Playoff ad buys.

The whole situation does raise an interesting question, however.  What happens when a bowl game that isn’t owned by ESPN (like the Independence Bowl or Pinstripe Bowl or runs into a similar situation? Both of those games will be broadcast by the network but have their own ownership who might have different priorities when it comes to deciding what to do during a weather delay. While it was easy for ESPN to “write-off” the First Responder Bowl, that might not be the case for others. They’ve got a lot more incentive to make sure the game is played and everyone goes home happy. Would they push for another broadcast window? Would they demand that the game is played a different day? Do they have a Plan B? Would ESPN even honor their Plan B?

It’s one of those situations we probably won’t find out the answer to until it happens. Regardless, canceling these games outright is not something ESPN or anyone else wants to happen. It creates way too many problems for everyone and devalues the entire experience for the student-athletes who earned the right to be there. However, bowl games exist because they’re a business. And now we know what it looks like when the weather is bad for business in bowl season.

As the bowl sponsor’s actual tagline says, it’s “like it never even happened.”