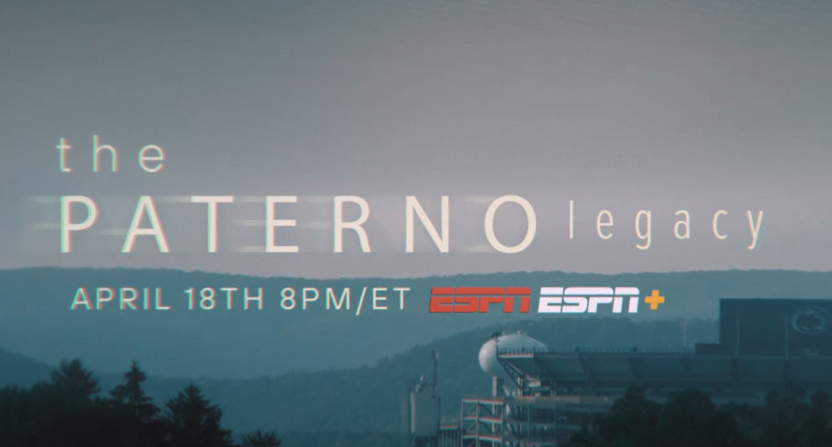 In the ESPN E60 documentary The Paterno Legacy, we hear the audio from an interview recorded long ago. Joe Paterno was asked about his epitaph. What would he like to see on it? The Penn State football coach responded by saying “Something like ‘He did his best. He had an impact.’… That would be a great epitaph for me if it’s true. I hope it is true.”

In the present day, those words trigger a tsunami of emotions. The Paterno Legacy, which debuts Monday, is a look back at the events of 2011 and 2012 that shocked a nation and toppled an icon.

Paterno was once considered the embodiment of integrity and all that was good about college athletics. His success, his longevity, and his famous Coke-bottle thick glasses made him one of the most recognizable people in America. He won two national championships. He raised millions of dollars for a school library.

That sterling image of Paterno doesn’t exist anymore. It was forever tarnished by the worst scandal in college sports history. Paterno was fired in November 2011 after sexual assault allegations surfaced against his former assistant Jerry Sandusky. Sandusky was later convicted of the sexual abuse of 10 boys. Paterno, who had worked at the university for 61 years, was dismissed over the phone for allegedly not doing enough to stop Sandusky.

Paterno was never charged with a crime as opposed to others in Penn State leadership who went to jail like the university president Graham Spanier, vice president Gary Schultz, and athletic director Tim Curley. Exactly what Paterno knew and when he knew it we’ll never know. He died 74 days after his firing at the age of 85, taking those answers with him to the grave.

This 1-hour documentary poses the question: what is Paterno’s legacy? In search of a conclusion, there are interviews with several people including Jay Paterno, Matt McGloin, Matt Millen, Mike Wallace, Spanier, Schultz, Bob Costas, and Howard Bryant. And yes, we hear from Sandusky and as well Aaron Fisher, one of his victims.

The Paterno Legacy provides plenty of background and context. E60’s John Barr meticulously goes over how the winningest college football coach of all time fell from grace. He also does a good job illustrating how the university has completely distanced itself from Paterno. There’s an uncomfortable moment between current Penn State coach James Franklin and Barr during which Franklin refuses to discuss Paterno. There’s also the ongoing mystery of what happened to the Paterno statue which was moved from Beaver Stadium to a “secure location” in 2012. It hasn’t been seen since.

This leads to a jarring, tone-deaf moment when Spanier says the removal of the statue was “a big mistake. That is rewriting history. They even went through the trouble of re-landscaping the area where it was so that nobody can tell where it was or that it was ever there. That’s just wrong.”

A statue for a football coach is relatively meaningless. No matter how many games he won. But he’s not the only one rushing to Paterno’s defense. Jay Paterno has plenty to say too but at least that’s understandable. Joe Paterno was his father.

But Joe Paterno was not the victim. Some people still are suffering. The most gut-wrenching scene in The Paterno Legacy occurs when Fisher describes how Sandusky invited him to his home and preyed upon him. As Fisher recalls what led up to the horrific abuse, you can still see the pain on his now-adult face.

The man responsible for that pain continues to maintain his innocence. In a phone conversation from a state prison where he’s serving a 30-to-60-year sentence, the 78-year-old Sandusky is still fighting for a new trial. He doesn’t reveal anything but called Paterno a “coaching father” and self-servingly claimed that the best thing he can do for Paterno’s legacy is to be exonerated.

This E60 documentary doesn’t offer up much that’s new and two voices are missed. Sara Ganim, who won a Pulitzer Prize for her reporting on the scandal for the Patriot-News, would have added valuable insight. (She’s now a correspondent for CNN so perhaps that was an issue). The other is Mike McQueary, the former Penn State assistant, who first reported that he saw Sandusky inappropriately touching a boy in the shower. McQueary has rarely been heard from publicly since settling a whistleblower lawsuit with Penn State in 2017.

What is The Paterno Legacy? Bryant delivers a cold truth: “People don’t talk about Joe Paterno as a football coach anymore…everybody is scarred from what happened during that scandal.”

That’s the epitaph that will reverberate throughout time.