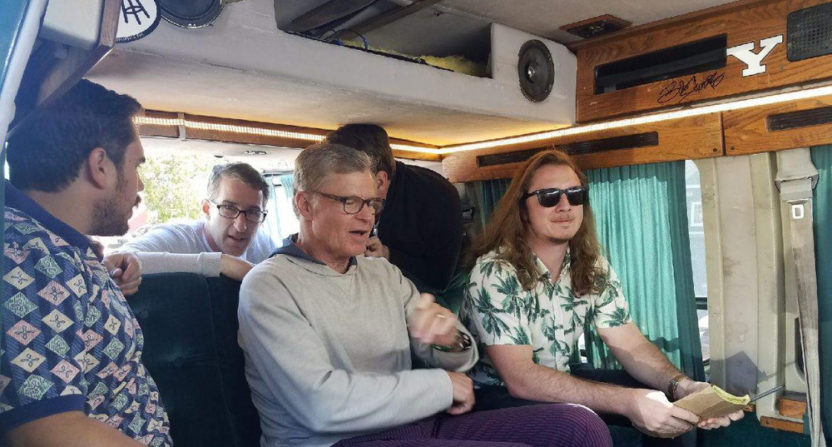 As ESPN moved forward with Barstool Van Talk, the eccentric talk show it was producing in partnership with Barstool Sports, it was easy to get the sense that not everyone in Bristol was thrilled. ESPN personality Sam Ponder called out some of Barstool’s past offensive comments towards her, while other network employees publicly took more subtle shots at the site.

And when ESPN canceled Barstool Van Talk earlier this week after only one episode, it quickly became clear that internal criticism had played a role in president John Skipper’s decision.

In a podcast interview with SI.com’s Jimmy Traina published Thursday, ESPN guru Jim Miller explained just how pervasive the anti-Barstool sentiment in Bristol was. Miller said employees had already attempted to circulate a petition and would have gone to management had Skipper not canceled the show when he did.

“Some of the people I heard from were complaining and they called asking me to write something about it and I asked had gone to management yet and they had not. So let’s break that down into groups like Sam, that were very very vocal both internally and externally about the issues they had. To get to a number, there was a second group that was very, very upset with it, but had not gone to management as of yet. I think if Skipper hadn’t pulled the plug when he did, you would’ve seen, I believe there was at least one attempt to start a letter amongst employees.”

Miller emphasized that internal criticism was not just the biggest reason Skipper ended Barstool Van Talk but, in fact, the only reason for the decision. He said ESPN knew it would face some backlash to partnering with Barstool but figured it could more effectively distance the show, hosted by the relatively anodyne Big Cat and PFT Commenter, from the site’s broader brand.

The intense backlash from within, therefore, caught Skipper and company a bit by surprise. In Miller’s view, the network could not have avoided this controversy even by choosing a different name for the program because “there was just too much connective [to Barstool] tissue for the ESPN community.”

Traina asked Miller whether it would be “too simple” to frame the decision to cancel Barstool Van Talk as Ponder vs. Big Cat and PFT.

“I think it’s a tad too simple. Sam certainly had the gumption, or according to some, the temerity. She was very decisive and very vocal and came out strong. But I think that she did that on behalf of herself, certainly. And I haven’t spoken to her about this, but I know for a fact there were many other employees, particularly women, who were very very upset with it. She was a champion for them. My only point is if she hadn’t said it, there were other people there upset about it. Whether or not they would’ve had the gumption or ability to go out and do what she did, I doubt it, but it was bigger than Sam. I know for a fact that the movement to get it out there was bigger than Sam.”

Based on Miller’s reporting, it sounds as if ESPN’s critical mistake was underestimating the opposition to Barstool within the network’s own ranks. Sam Ponder may have been the most vocal opponent of the partnership, but she was apparently not nearly the only one.