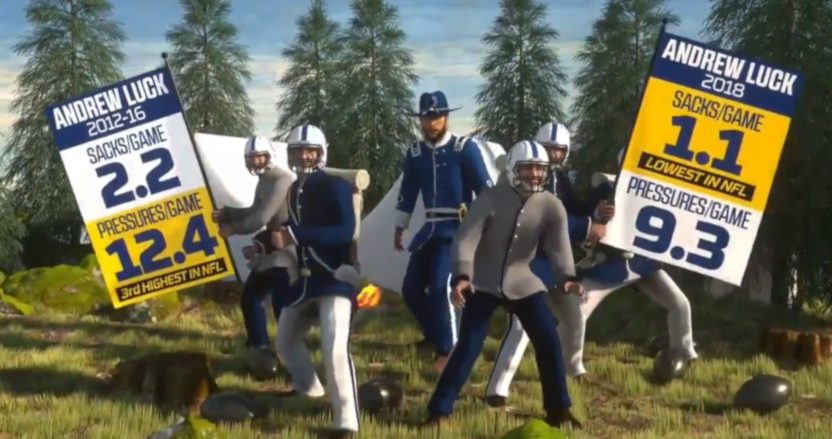 During Saturday’s Colts-Texans NFL wild-card game , ESPN took a whole lot of flak for a segment they showed riffing on the various memes of Colts’ quarterback Andrew Luck as a Civil War soldier (many of which started with the @CaptainAndrewLuck Twitter account, but have since spread elsewhere). Their graphic included Luck as a Union officer protected by Confederate troops, and perhaps most controversially, it included the famed song “Dixie” (seen as pro-Southern despite its Northern-born composer, and used as a Confederate marching song and anthem during the war) as the background music. On Sunday, ESPN’s Josh Krulewitz said it was a “mistake” to use the song in a statement to Michael McCarthy of The Sporting News. First, here’s the original clip, via the NFL on ESPN Twitter account:

Here’s some of the reaction to that:

Soooo we going to act like this didn’t happen @espn can u please explain? I’m an afro American and no I don’t wish I was in dixie.. pic.twitter.com/3iTFXj4CoN

@espn We're waiting for your apology for the Civil War graphic and use of the Confederate anthem "Dixie." Inaccurate + tone deaf.

@espn @JasonWitten @nfl someone needs to get fired, publicly, over playing #dixie during playoffs. That's intentional shit, and you just made the white power dudes cream their jeans

I was not expecting to hear Dixie with video game graphics during the Wildcard game. I guess ESPN really is trying to cater to the red states.

ESPN played “Dixie” over this, which is a song of the racist-ass confederacy.

Not only was it ignorant to do so, but also historically inaccurate. This is a BIG L https://t.co/okvBRL0J8b

Lol @espn playing the Andrew Luck video graphic with Confederate soldiers protecting him and “I wish I was in Dixie” playing in the background. Indiana was a Union State. But what good is being historically accurate??‍♂️

Yes, as Baird notes there, this is incredibly historically inaccurate. Having troops from both sides protecting Luck sort of ignores that, you know, there was a war, and Indiana’s contributions to that war included around 210,000 Union soldiers and sailors (with over 25,000 dying). There’s zero reason to portray both sides in a war teaming up as participants in a modern-day football game, and there’s zero reason to give the Colts any association with the Confederate states. And for a network that keeps emphasizing that they don’t want to be political, you’d think they’d avoid controversial moves like this.

But it’s the use of “Dixie” that made this graphic much worse, as that’s a song that wound up very much associated with the Confederacy. (President Abraham Lincoln talked about reclaiming it post-war, but even today, “Dixie” still carries strong Confederate associations, which has even led to Southern schools like Ole Miss axing it as a band song.) And if they hadn’t put that song in, there would have been some complaints about the graphic, but they wouldn’t have reached this level. As per ESPN, though, that was a mistake. Here’s the explanation and apology ESPN offered McCarthy:

“Dixie” was not part of the graphic when the piece was initially produced and approved, a source told SN. Instead, the song was dropped into the piece at the last moment by a staffer in the production truck. A source said ESPN addressed the issue with the staffer, but would not elaborate on the outcome.

“It was a mistake to use this song. We regret having done so and we apologize,” said ESPN spokesman Josh Krulewitz in a statement to SN.

On the bright side, at least ESPN apologized (for the music choice, if not anything else). But this was still a mistake from start to finish, even if they hadn’t thrown in a particularly problematic song. Talking about memes is one thing, and the Civil War/Ken Burns-style letters from Luck that have been everywhere over the last couple of years aren’t a bad subject of discussion for a broadcast; both ESPN’s Sunday NFL Countdown and NBC’s Sunday Night Football have previously featured those without incident. But this graphic was a terrible idea for portraying Luck (born in Washington, D.C., for the record) and the Colts as linked to the Confederacy, and the choice of “Dixie” made that much worse. Light-hearted graphics are fine, but it’s definitely worth being more careful around topics like the Civil War.