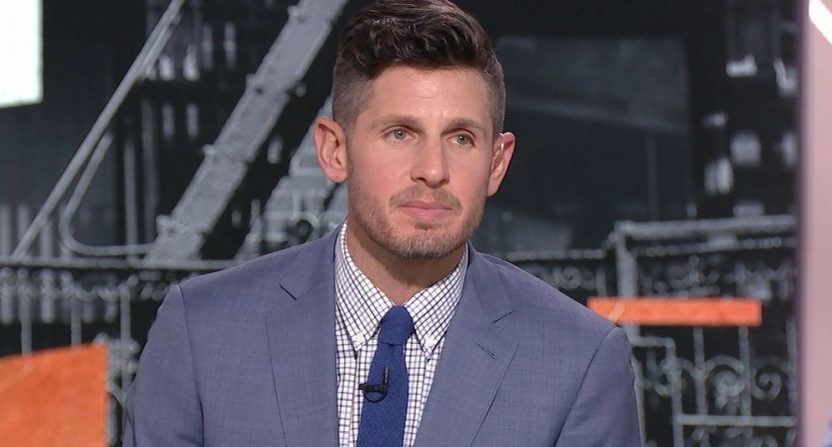 ESPN NFL analyst Dan Orlovsky has enjoyed increased visibility on the network during the past football season. The former NFL quarterback has not only provided studio analysis for NFL Live but is also regularly featured on ESPN’s morning show Get Up and SportsCenter. Orlovsky also worked as a college football game analyst on TV and radio during the past season.

Among the viewers who have noticed and appreciated Orlovsky’s analysis for ESPN are executives from NFL teams. As reported by ESPN’s Adam Schefter, Orlovsky has been contacted by several clubs about joining their offensive coaching staff. Prior to the 2019 season, the Green Bay Packers checked his interest in signing on with new coach Matt LaFleur’s staff.

Orlovsky, 36, has flourished in his increasing role on ESPN and told Schefter that only “a perfect mix of circumstances” would make him consider leaving the network and joining a NFL coaching staff. In a profile for The Athletic late last year, Lindsey Jones reported that Orlovsky moved his family from Philadelphia to Connecticut after reworking his contract with ESPN for his larger role. Presumably, it would take an ideal job for him to relocate his wife and four children to a new city for an NFL coaching job.

After retiring from the NFL in 2017, Orlovsky took an unusual route to broadcasting. Encouraged by his wife to post some analysis of Carolina Panthers quarterback Cam Newton changing pass protection on a particular play, Orlovsky’s at-home breakdowns with his iPhone, TV or computer, and finger drew enough notice that NFL Network’s Peter Schrager soon invited him to contribute to Good Morning Football.

That fueled an interest in broadcasting which began while Orlovsky was still playing. (During his 12-year career, Orlovsky played for the Detroit Lions, Houston Texans, Indianapolis Colts, Tampa Bay Buccaneers, and Los Angeles Rams.) Eventually, he accepted an offer from ESPN largely because it allowed him to call college football in addition to doing NFL studio analysis.

Orlovsky will be part of ESPN’s lead up to the NFL Draft, pitching ideas to producers like going through a quarterback’s pro day workout to show that it’s not necessarily a good way to gauge a prospect’s NFL viability. He also has eyes on getting an even bigger profile on the network, hoping to land roles on ESPN’s Monday Night Countdown and/or College GameDay pregame shows or even an analyst’s seat in the Monday Night Football booth.

In the meantime, Orlovsky is still posting analysis online with his iPhone and TV monitor. He’s breaking down offensive plays and schemes even when he’s not in the studio, as he did Sunday during the NFC Championship game between the Green Bay Packers and San Francisco 49ers.

Orlovsky’s career ambitions are clearly geared toward broadcasting. But maybe that’s because he never quite considered coaching as part of his future. The coaching life would almost certainly be more taxing than TV work, which might hint as to which way Orlovsky is leaning.

However, NFL teams showing interest in him bringing his knowledge to a coaching staff, applying all he’s learned in various offensive systems during his playing career, is validation of the work he’s doing on television.

It’s not just football knowledge that makes Orlovsky shine. He’s an engaging presence on television, able to talk terminology and jargon with coaches, but also showing a talent for mixing it up with some of ESPN’s other more bombastic personalities with creativity. Based on what we’ve seen from Orlovsky at ESPN through this football season and where he envisions his broadcasting career going next, it seems apparent that we’ll be seeing a lot more of him on TV in the future.