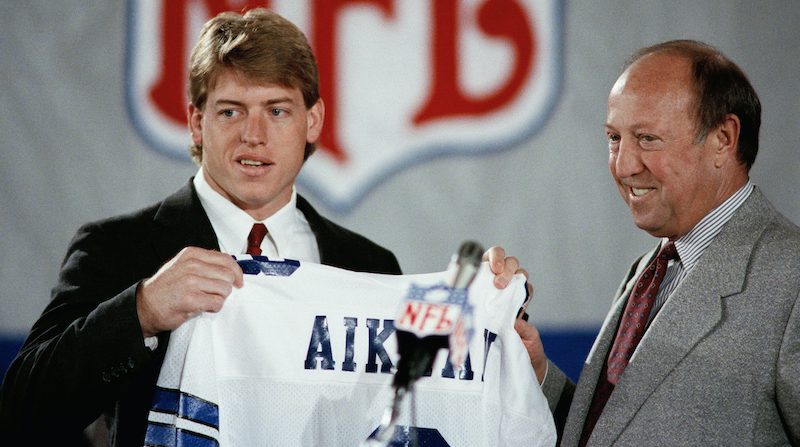 Just how excited are you for some NFL Draft action? Just how starved for any sports content are you? And what exactly constitutes “classic” sports broadcasts?

ESPN is putting those questions this week leading up to Thursday’s first round of the 2020 NFL Draft by re-airing classic first rounds of previous drafts. The nostalgia trip for the league’s annual player selection meeting begins Monday night on ESPN2 at 8 p.m. ET with a re-broadcast of the 1989 draft’s first round.

Four “classic” NFL Draft first rounds in total will air on ESPN2 this week leading up to the 2020 edition. ESPN’s Bill Hofheimer tweeted out the broadcast schedule on Friday:

From a sports media standpoint, the 1989 NFL Draft is certainly intriguing since Troy Aikman was the No. 1 overall selection by the Dallas Cowboys. The Hall of Fame quarterback is now the top game analyst for Fox Sports, paired with Joe Buck on the network’s No. 1 NFL broadcast team.

Yet the first round of the 1989 NFL Draft is most notable for producing four future Hall of Famers among its first five selections. In addition to Aikman, Barry Sanders, Derrick Thomas, and Deion Sanders have each been inducted into Canton.

Does that mean people will actually tune in for Monday’s re-broadcast, however? Sure, it could be amusing to see how young legendary players looked 31 years ago. (Did you enjoy baby-faced Michael Jordan from 1984 while watching the premiere of The Last Dance?) And maybe it will be intriguing to hear some of the analysis (much of it from familiar face Mel Kiper).

But how many notable moments can you find on YouTube? As a Detroit Lions fan, when I saw ESPN’s announcement, my first thought was that it might be fun to see Barry Sanders get drafted with the No. 3 overall selection. But what I really wanted to see was Deion Sanders expressing relief that the Lions didn’t draft him in an interview with Andrea Kremer.

“I would’ve asked for so much money they would’ve had to put me on layaway,” Sanders said at the time. You don’t typically get quotes like that from draft prospects anymore.

That was a memorable NFL Draft moment. But I found the clip online, so I’m not sure how interested I am to see it on ESPN’s “classic” 1989 re-broadcast. I think I’m good there.

Not to mention that these draft broadcasts don’t appear to be edited down very much for time constraints. Looking at the cable listings for Monday’s show, it’s going for three-and-a-half hours, from 8 p.m. ET to 11:30 p.m. Wow, it really will be like reliving the whole thing again.

Maybe there will be some modern commentary on those picks from current ESPN analysts, but there’s no indication that will be the case. And perhaps some will enjoy asking “Whatever happened to that guy?” with several of the selections.

The choices for other “classic ” NFL Drafts seem relatively random, as well. Is 2014 really that notable? Is Aaron Rodgers sliding all the way to the No. 24 selection in the 2005 draft worth sitting through hours of re-broadcast? The 2017 draft is curious for the Chicago Bears selecting quarterback Mitchell Trubisky with the No. 2 overall pick instead of Patrick Mahomes, who just won the Super Bowl with the Kansas City Chiefs, and Deshaun Watson. But does reliving that create enough intrigue for you to tune in?

ESPN is certainly hoping that you’ll do so instead of watching something — anything — else. Like maybe the first two episodes of The Last Dance again.