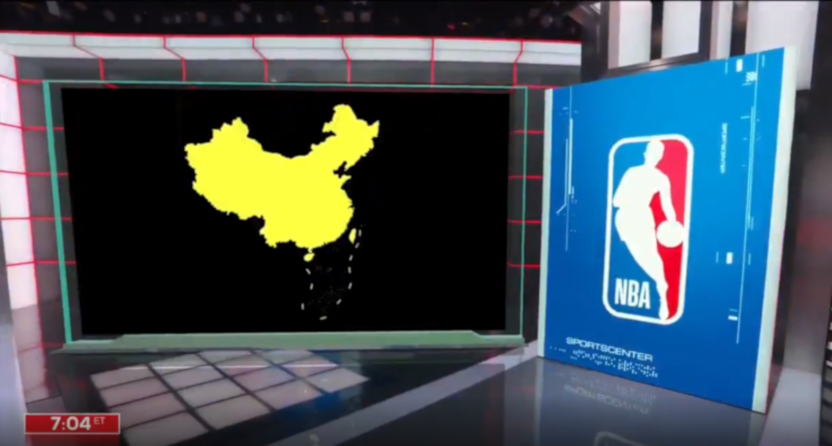 While ESPN sent out a memo this week “mandating that any discussion of the Daryl Morey story avoid any political discussions about China and Hong Kong, and instead focus on the related basketball issues,” one of their graphics packages did not stick to sports. On Wednesday morning’s 7 a.m. Eastern edition of SportsCenter, they used a map that’s only recognized by the Chinese government, one that suggests China owns Taiwan, part of India, and disputed areas in the South China Sea. John Ourand of Sports Business Journal has more on that:

In its reporting on the NBA-China dispute, ESPN mistakenly used a disputed map of the country that has led some critics to accuse it of kowtowing to the Chinese government. During a Wednesday morning “SportsCenter,” ESPN used a map that indicated China owned Taiwan and disputed areas in the South China Sea. The Chinese government uses these maps inside their own country to show their ownership over these territories; they are not accepted internationally.

Wow, nothing to see here except @ESPN implicitly acknowledging China's claims to the South China Sea by using the "Nine-Dash Line" on a graphic today #StandWithHongKong: pic.twitter.com/KCDIV77h5H

There are a whole lot of problems with that map, as many pointed out:

Here's the official U.S. State Department map of China laid over the top of the one ESPN used. I don't even know how ESPN acquired such a map. The yellow parts that remain are parts of other countries that China has claimed. pic.twitter.com/l7EalzY54s

If showing the 9 dash line in the #SouthChinaSea was not enough, the #ESPN map of #China also shows the #Indian state of Arunachal Pradesh included as part of #China. Via @nktpnd & @SenorDroolcup – #ESPN & #NBA are the new propaganda puppets of the #Chinese regime. pic.twitter.com/kl48ICBL4r

As a Twitter observer noted, not only does ESPN's China map include Taiwan and the Nine Dash Line, which the US gov't and international community deem illegal, it also includes the Indian state of Arunachal Pradesh, which the US has recognized as Indian territory since the 60s.?‍♂️ pic.twitter.com/J3UVkt1trM

So there are a lot of complaints there. But what’s really amazing is that the countless people employed in public relations at ESPN and parent corporation Disney hadn’t issued any comment on this incident by 11 a.m. Eastern Thursday, despite it being 28 hours old by then. Despite a whole lot of requests:

Sports Business Journal: “ESPN declined to comment on the use of the graphic. On Tuesday night, Scott Van Pelt’s “SportsCenter” used a completely different map of China that did not include those disputed territories.”

The Hill: “ESPN declined to comment on the map when contacted by The Hill.”

That seems like a terrific response to a crisis that’s bringing a lot of condemnation for ESPN. Yes, not all criticism deserves a response, but this certainly would seem to, and the story isn’t going away just because the PR departments are staying quiet. And even a simple “We made a mistake and regret the error” would look a lot better for ESPN in the eyes of everyone who isn’t China.

ESPN keeping quiet means there’s no official counter to those who are actively accusing them of being Chinese propagandists, and pointing out ESPN and Disney’s many vital business ties to China. Those ties include a mainland theme park, a Hong Kong theme park, an ESPN partnership with Chinese internet company Tencent (playing its own critical role in the NBA-China dispute) and perhaps most importantly, a crucial market for Disney’s films. It seems rather unlikely that ESPN deliberately set out at a corporate level to use a Chinese government map that everyone else hates, but the lack of disavowal of that map isn’t helping their perception anywhere but China.

But perhaps that’s what’s behind the silence. The NBA dispute really escalated thanks to the Chinese government being unhappy with commissioner Adam Silver’s very muted remarks (which took their own criticism from everyone not in China), and maybe Disney and ESPN don’t want to risk any comment that might offend the Chinese government and lead to repercussions for their businesses there. The lack of comment here isn’t helping their reputation with anyone other than the Chinese government, though. And it’s amazing that a company that’s been so focused on “stick to sports!” managed to create a giant political controversy thanks to their map choice.