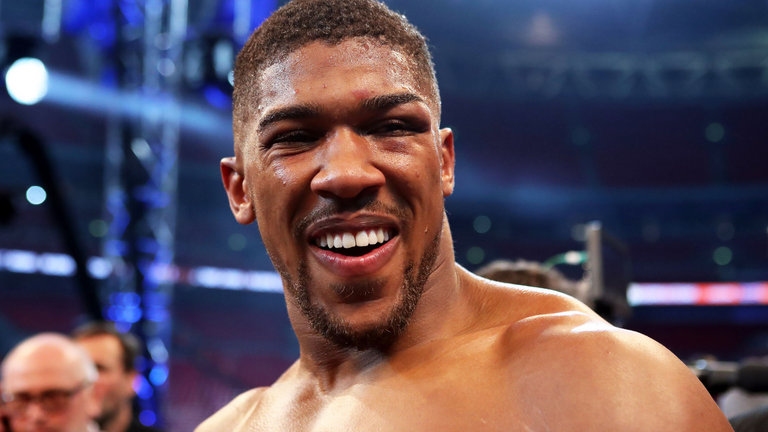 To promote the announcement of his first U.S. based match, WBA (Super), IBF, WBO, and IBO heavyweight champion Anthony Joshua was in the United States doing publicity for his June 1 fight against Jarrell Miller at Madison Square Garden.

The Athletic’s Richard Deitsch reported that Joshua was supposed to do multiple interviews with ESPN on Thursday but all the interviews were canceled the night before for an unknown reason. Deitsch noted that Joshua “was scheduled to appear on multiple ESPN platforms Thursday including an on-set appearance on First Take.” And then both sides had confirmed the day before that Joshua would conduct multiple interviews out of ESPN’s NYC studios due to higher demand for Joshua. It’s strange timing for a bunch of interviews to be canceled on such short notice and it depends on who you ask to figure out why it happened.

Deitsch reported that reps for the boxers believed that the interviews were pulled by executives at the top because they didn’t want to promote a fight on DAZN, which is run by former ESPN president John Skipper. ESPN’s side of the story was that they told Deitsch they decided they wanted to hold off on interviewing Joshua until it got closer to the fight.

Reps for the boxers believe that people on the higher levels of ESPN pulled these interviews once they learned about it and didn’t want to promote a fight on a network run by John Skipper.

There’s logic behind having this thought. ESPN used to keep their on-air personalities from appearing on Dan Patrick’s post-ESPN show (which has since been resolved) and ESPN has a reputation for primarily covering the sports and leagues they have the rights to. It’s why you don’t see much about NHL or NASCAR or Big East basketball. If ESPN can avoid talking about a sport or event they don’t have the rights to, it’s likely they won’t talk about it that much. And in boxing, it might be realistic to believe that ESPN would rather talk about Top Rank than Joshua-Miller, even if it is for the heavyweight championship.

Having said that, if this is somehow true, it shows that something is going on within ESPN. DAZN’s explanation of what they felt ESPN did seems like a situation where the left hand doesn’t know what the right hand is doing. ESPN’s top brass seemingly wasn’t aware that Anthony Joshua was going to be on the air and ESPN producers on multiple ESPN TV and radio shows were seemingly never clued in on not involving covering an event John Skipper has a hand in. And that it got to the point that they canceled the heavyweight champion and arguably one of the big names in boxing the night before conducting a bunch of interviews with him.

ESPN explained that they wanted to wait until closer to the June 1 fight. Surely ESPN is big enough that if they wanted to, they could’ve interviewed Joshua both times and have done the Thursday interviews as well as interviews closer to the fight. But if that were to happen, it might put ESPN in a spot where they’re giving too much time covering a fight being broadcast by a competitor, compounded with that competitor being led by the previous president of your network. Anthony Joshua’s first U.S. fight is big news but it’s not as big news as the actual fight and the lead up to that fight.

At the same time, even if ESPN was in the right to cancel these Thursday interviews, they did it at the worst possible time. If it was a week or two out and ESPN decided to cancel, that’s one thing but doing it the night before, when Joshua is in the United States, just makes ESPN look bad, not to mention put extra work on producers for their shows now having to come up with last minute segments to replace these interviews. At the same time, DAZN leaking out that they were wronged might have some merit but DAZN needs ESPN more than ESPN needs DAZN in terms of promoting the fight. ESPN may have wronged DAZN and they’re well within their right to express their frustration with ESPN but doing it publicly ultimately doesn’t do anything and potentially further damages an important relationship where both sides look petty as a result. Even if DAZN felt they were in the right, it’s sometimes best to bite your lip on something like that.

I’m not sure the real reason Anthony Joshua’s ESPN interviews were canceled but there’s something we’re not being told that led to this. Maybe there are bits and pieces from what both sides have said that added up to explain part of it but there’s a big piece of the puzzle we don’t have.

For the public to better understand the situation, we need to know the answers to these three questions. 1) Who at ESPN made the call to cancel the interviews? How high up did it go because the higher it goes, the more serious ESPN took this situation to make the decision they made. 2) Would ESPN have made the same decision to cancel if John Skipper wasn’t in charge of DAZN? That would tell us whether or not this is personal toward Skipper or this is simply a decision to not promote an event from a competing network that’s over three months away. 3) Will ESPN take kindly to someone making something like this public? ESPN has other things for content that, even if this is for the heavyweight championship, they will be just fine not promoting Joshua-Miller on their networks. ESPN may have mentioned wanting to interview Joshua closer to their fight. Would this reveal to cancel change ESPN’s mind and they just decide it’s not worth it, potentially hurting DAZN in the process?

Everyone wants to say “business isn’t personal” but sometimes it is whether we want to or not. When corporate execs have disagreements such as this, things can turn sour very quickly. As Deitsch remarked, middleweight champion Canelo Alvarez is set to do press next week for his May 4 fight against Daniel Jacobs on DAZN. ESPN hasn’t revealed if Alvarez, who has a huge deal to broadcast his fights with DAZN, is doing any interviews with ESPN but the response to Alvarez may give us more insight on what happened with Joshua.