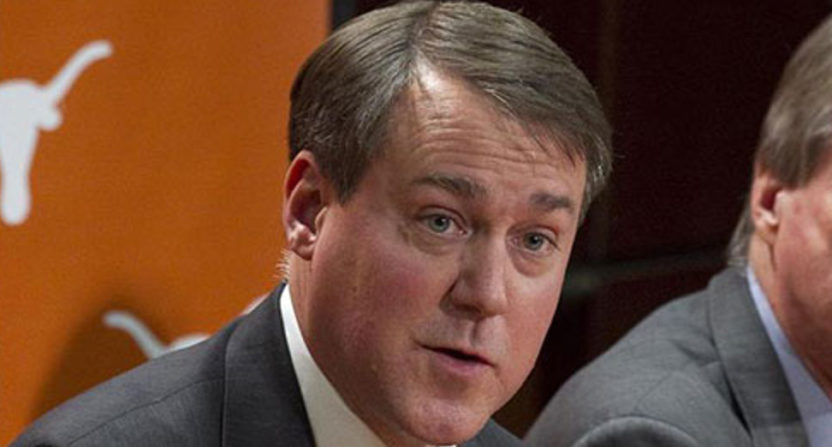 There’s been lots of discussion about the possibility of expanding the College Football Playoff to eight teams, and given how well the playoff games have drawn for ESPN (especially now that they’ve been moved off New Year’s Eve), many have figured the network would be on board with that.

However, ESPN executive vice president of programming and scheduling Burke Magnus told Sports Business Journal‘s John Ourand this week that while the network has “nothing to do with” any decision on changing the playoff format, they’re not lobbying for playoff expansion and think it could actually create some problems for their regular-season schedules.

Here’s the podcast where Magnus talks to Ourand:

And the key part of his comments, as transcribed by Ourand:

Speaking on this week’s SBJ/SBD Media Podcast, ESPN Executive Vice President of Programming and Scheduling Burke Magnus said ESPN is “not at all” advocating for the current four-team format to expand, worried that any expansion could weaken college football’s regular season.

Because so much of its fall schedule is dominated by college football, ESPN finds it especially important to keep the regular season relevant. Magnus pointed out that ESPN has invested more in college football than “any other category that we do,” given all of the rights deals the network has with various conferences.

“I would worry a little bit that conceivably any change might bring with it some unintended consequences relative to the regular season,” Magnus said. “I also look at the totality of college football and making sure that they don’t unintentionally water down the competition during the regular season such that playoff bids are determined in advance or that we go back to the automatic qualifying business of the BCS, which was not the sport at its best.”

Magnus also argued even that the exclusion of a deserving team can be seen as a good thing from the network side, as the ongoing debate about who should be in the playoff helps create more interest around the games.

“Part of the beauty of the College Football Playoff is that four teams is going to, quite arguably, exclude somebody who might have a very good case,” Magnus said. “Whether that’s Ohio State or UCF or whoever it might be — USC was the champion of the Pac-12 and they were out this year, too. By design, there’s going to be people on the outside looking in.”

There are some valid points there, as ESPN certainly does want a strong regular season slate and debate about who’s in the playoff (for their regular-season games, their playoff ranking shows and their other studio content). But it feels like there would still be decent regular season interest even with an expanded playoff, and that the ratings for extra playoff games might be worth any regular-season tradeoff.

However, the status quo is certainly working for ESPN too. Their general bowl audience is up 12 per cent year over year, and their regular season ratings have been good. And while it may be “conference commissioners, university presidents and CFP Executive Director Bill Hancock” who make the decision on playoff expansion, ESPN’s desires are presumably an important part of what those people base their eventual decision on given the importance of TV revenue (and ESPN-provided TV revenue) to college football.

So it’s definitely interesting that Magnus says they’re “not at all” advocating for expansion. That doesn’t mean we won’t get an expanded playoff, or that it won’t work out well for ESPN if and when it does happen. But it’s notable that the network isn’t pushing for it, at least publicly. And the ratings downsides Magnus raises are certainly worth at least considering. We’ll see where the expanded playoff conversation goes from here, but ESPN at least appears to be lining up on the “keep the status quo” side for now.