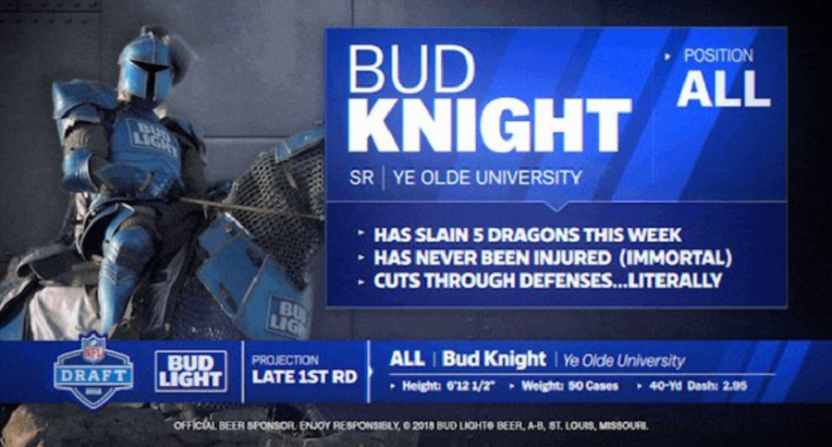 You might have missed it, but ESPN tried out a slightly different method to slip a commercial into their NFL Draft coverage Thursday night.

As Variety noted, Bud Light’s silly (silly) Bud Knight campaign found its way into the broadcast in split-screen format, as though ESPN was touting the Bud Light character as a draft prospect.

In a cutaway that looked more like a quick-hit player profile, ESPN ran what is known as a “two-box”or “double-box” screen that was really a commercial from Anheuser-BuschInBev. Host Trey Wingo told viewers his team of analysts would return after “a look at one of the most promising talents in this year’s draft class – from Bud Light.”

Viewers got all that and more. One box showed the Bud Knight, who made its first appearance during Bud Light Super Bowl ads earlier this year, trying on hats from the New York Jets and Baltimore Ravens. The other offered facts and stats on his faux college-football career. Did you know the character hails from Ye Olde University? Slayed five dragons this week? And “cuts through defenses (literally)”?

Your appreciation for the commercial itself probably depends on whether or not you still find “Dilly dilly!” to be an amusing thing to say, but the format itself is the more interesting development, as a way to potentially beat people watching on DVR or conditioned to look at their phone during ad breaks. The entire premise behind the double-screen was to do that already, of course; run the ads on one side with a visual of the event itself on the other.

But to essentially use the format as a Trojan horse for an ad taking up both sides of the screen is different, and ESPN seems to think there’s a viable future in the format. Again from Variety:

“I think that fans are savvy enough when they see this spot they’ll realize exactly what’s going on,” says Deidra Maddock, vice president of sports marketing at ESPN, in an interview. “Advertisers ask us to push the envelope, and there are times when we don’t push it as far as they would like, but I think we are in a nice middle ground here.”

ESPN was mindful of fans’ experience, says Maddock, making sure not to let the Knight cut in to proceedings too early – or interrupt the actual draft. They also made sure Wingo told fans they’d return to current action within 15 seconds. Because the network had tried the double boxes during “Monday Night Football” last season, she says, executives wanted to see if they could try something new and more unique that would still keep fans with the program. Viewers saw other advertisers woven into the broadcast as well: Marriott showed up in various chryons, while DXL Men’s Apparel appeared in graphics just as the new draft picks were interviewed. “Looking good,” read the captions beneath the new NFL entrants.

Essentially, get ready to see a lot of ads like this going forward. Networks have to adjust for technology, of course, but it’s also another example of the blurred lines between the business, entertainment, and news arms of ESPN’s operation. And on a night when ESPN’s own reporters weren’t breaking news of draft picks to avoid spoiling the broadcast, it’s apparent that those lines are as faint as ever.