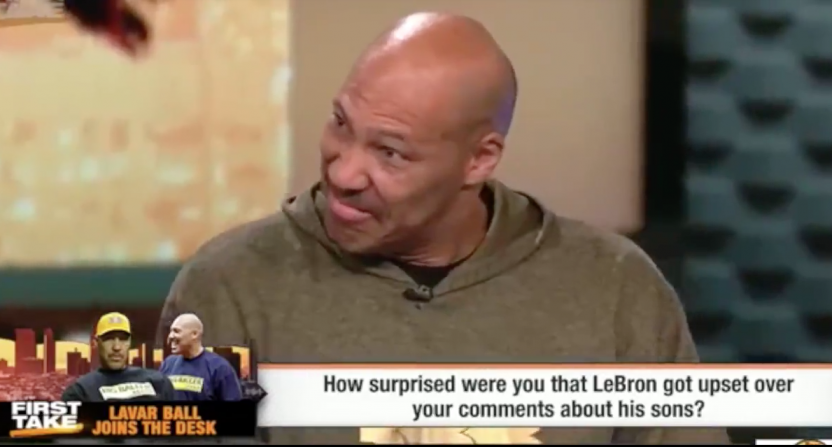 Whether you can’t wait to hear what LaVar Ball says next or are simply sick of him, it’s undeniable that LaVar Ball has created a buzz which has a lot of people interested. The ratings show it, our page view numbers show it, people are interested in the Ball family. Even if that means a father is making it nearly impossible for his son to overcome the type of hype that’s already been put on him.

After ESPN had LaVar on First Take this past Thursday, some ESPN personalities were against giving LaVar the platform to declare (or yell) such wild things like LaVar being able to beat Michael Jordan one-on-one or his son Lonzo, who just declared for the NBA, has the same impact on a game as Magic Johnson had.

These included Dari Nowkhah, Jeff Goodman, Kirk Herbstreit and Danny Kanell. A range of those in the media who report sports news as well as former athletes who had been in Lonzo’s position as a young, collegiate athlete.

Begging ALL media, INCLUDING US… KEEP LAVAR BALL OFF THE AIR. Please. America is turning against Lonzo BECAUSE of Lavar.

People need to understand that Lonzo is the opposite of LaVar. Lonzo reminds me of Kawhi Leonard as a kid. Quiet, respectful, just plays. https://t.co/d3Tp4qMl4y

He's like a WWE character. Clearly doesn't believe half the stuff he says–but it creates headlines and getting people's attention. Sucks. https://t.co/Sqx3Pl0isC

@richarddeitsch not a video. Multiple videos. It's embarrassing.

(Credit to The Spun for collecting the tweets)

Well, despite those concerns, get ready for more of the same because ESPN announced that LaVar and Lonzo will both be on First Take on Monday.

Guess who's coming back for Round 2? And bringing back-up. Yup! LaVar and Lonzo Ball will be in the house. Monday's show bout to be ?! pic.twitter.com/EANd5SBlsn

This level of hype was last seen with Tim Tebow. In his heyday as an NFL quarterback, it seemed like everyone at ESPN was required to mention him at least once on every broadcast. It didn’t matter if you were doing football or NASCAR or bowling, Tebow needed to be connected to anything and everything.

This caused people to simply hate Tebow for how the media, and primarily ESPN, covered him. It’s done a bit more low-key now but Tebow’s baseball career can be seen in a similar light. It had nothing to do with Tebow as a person, and everything to do with how he was shoved down everybody’s throats and being unable to meet impossible expectations and hype. At least some are seeing the similarities with Lonzo Ball and are publicly saying something.

Like Tebow, Lonzo Ball seems like a great person who’s well-adjusted and would be someone to root for because he’s trying to do things the right way. And you can credit LaVar for much of that as Lonzo’s father. It’s just that you can only be told so often how great someone is before it becomes white noise and people eventually stop listening. Especially if they cannot back that up in competition. And then if you keep doing it, people will eventually hate the person even if it’s a type of irrational hate that guys like Tebow and Ball cannot control.

For Lonzo, it’s going to be near impossible to overcome his father’s hype. As he goes from college to the NBA, all eyes will be on him and many are waiting for the first instance of him struggling in order to pounce with hot takes that Lonzo is going to be a bust. I’m hoping that Lonzo has a successful NBA career. Not so much as to prove his father right, but it would be terrible to see a father unknowingly sabotage his son’s career and I would rather not watch a “30 for 30” ten years from now that’s all about how Lonzo Ball’s father torpedoed his NBA career.