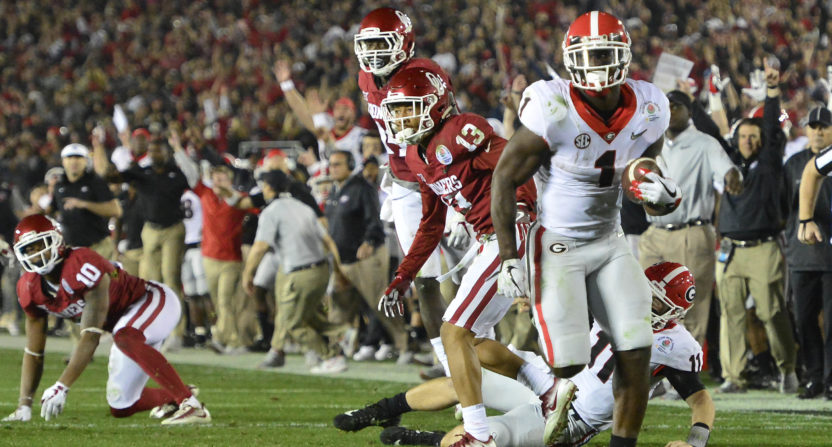 With the Georgia-Oklahoma All-SEC matchup coming up in the national championship game tonight, there’s a lot of focus on how low the ratings might go. The last All-SEC title game matchup between LSU and Alabama was far from a ratings winner in 2012 and tonight’s game could produce a similar story, especially if it’s a game that doesn’t come down to the wire.

While the matchup tonight, the playoff selection process, and UCF claiming a national championship for their own has brought a lot of scrutiny to the current four team structure, what about the rest of bowl season?

While there might be some concern for ESPN heading into tonight’s game, the good news for the network is that they saw ratings increases for the 2017-2018 bowl season compared to last year. At a time when many sports and networks are racking their brains trying to figure out how to stop various ratings slides, ESPN actually saw a 12% gain for bowl season this year. Considering that the company has what amounts to a monopoly over bowl season (televising all but 5 games this year), that’s very good news for the FBS postseason.

Ah, but surely that rise for ratings is based solely on the fact that the CFP semifinals were on New Year’s Day, when they should be played every year, right? Yes, the semifinals were up huge – 28% for the network. But in what might be even more encouraging news for ESPN and the bowls, the network saw an increase at every level of FBS bowl games. Not only did the semis rise thanks to the one year in the rotation that actually makes sense, but the rest of the New Year’s Six and the non-NY6 bowl games saw significant rises in ratings as well.

ESPN was also up 7% for its non-New Year’s Six bowls, averaging nearly three million viewers for its 29-game slate (2,945,000 viewers).  The successful start of the season continued into New Year’s weekend, as documented earlier this week, ESPN was up 8% for the New Year’s Six and 28% for the College Football Playoff Semifinals.

This is big news for a number of reasons and for anyone hoping for a complete overhaul for the college football bowl system, you may have to keep waiting.

First, let there be no doubt that the bowl system and bowl season is meant now for ESPN on a national level. Bristol isn’t just invested because these bowl games take valuable programming space as live events, they’re invested because they own 14 bowl games that air on their family of networks. As long as Disney has that much invested in the current bowl structure, it’s not going to matter if the stadiums are 95% full or 45% full because it’s all about the television ratings. They are being operated by a television company after all.

Conventional wisdom would make fans think that these early bowl games are becoming more and more irrelevant with the advent of the College Football Playoff. It’s why the playoff system was resisted against for so long. Another factor seemingly working against these games is more and more star players sitting out to preserve their NFL careers. Even OSU star cornerback Denzel Ward sat out of the Cotton Bowl and a Top 10 matchup against USC. That would have been unheard of ten years ago or maybe even five years ago but is commonplace today.

With decreased stakes and an increase in players sitting out, all of the theoretical evidence would make one think that the non-playoff bowl games should be decreasing in ratings. Nevertheless, people are watching regardless. We just love college football too much to ignore any bowl game that is on the television screen, whether it’s USC-Ohio State or App State-Toledo. And as long as people watch, these bowl games aren’t going anywhere. And if the bowls aren’t going anywhere, it’s going to be more difficult to bring about a substantial change to college football’s current postseason structure.