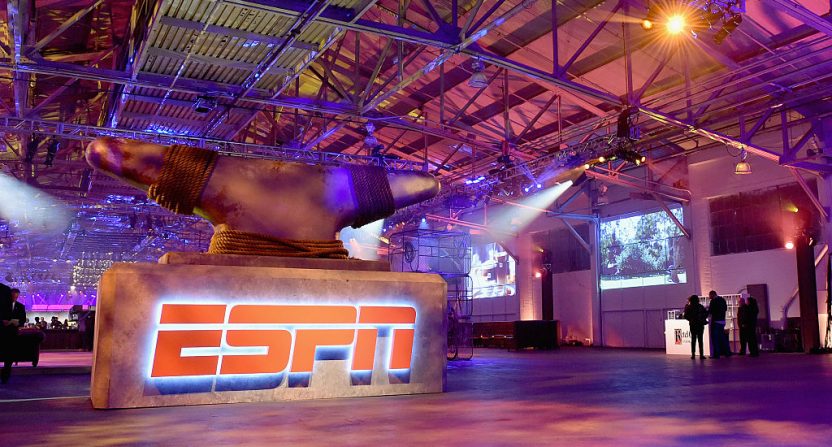 ESPN has become a left-wing stronghold. Jason Whitlock and Clay Travis raised that talking point. It’s a shrewd one. Going after ESPN gets you attention. Careers and websites have been built on that. It’s great for Fox Sports, ESPN’s direct competitor. It’s promotable across other News Corp media properties.

Judging from ESPN’s reaction, the political critique hit a battleship. ESPN PR refuted the claim with survey data. Perhaps coincidentally, ESPN announced the same day that Hank Williams and his rowdy, conservative friends would return to the Monday Night Football fold. (We can all be wistful for 2011 when there was a pale and likening a politician you disagreed with to Hitler went beyond it.)

There is truth in the liberal claim. ESPN has tilted leftward under John Skipper. The network co-hosted a town hall on race and policing with Barack Obama (back in 2008, ESPN blocked Bill Simmons from having him on a podcast because it was political). The ESPYs attempted poignant statements on LGBTQ issues and gun violence. ESPN created a niche site, the Undefeated, to address racial and cultural issues (first edited by Jason Whitlock).

ESPN’s new opinionists are less likely to be old, white, and male. They are more apt to discuss politics and culture. Particularly on social issues, they express a particular world view. More menshevik than bolshevik, if we’re making that analogy. There may be a top-down element, whether it is John Skipper’s personal beliefs or Bob Iger laying the groundwork for a presidential run.

This story gets tenuous, however, when connecting politics to the broader ESPN decline narrative. One can surmise significant numbers of aggrieved conservatives are abandoning ESPN programming. But, there’s no proof, and multiple factors are at play. What those people are not doing is getting so riled up by the ESPYs they cancel cable altogether, the major problem for ESPN’s business model. Every SEC state went for Trump. Are those fans not going to watch their football team the 90 percent of the time it is on an ESPN-affiliated network? At best, there’s a flimsy correlation (more than enough for conservative outlets to run wild with it).

Is ESPN’s leftward move the wrong decision? Determining that requires sorting out that nebulous second part of the story. The costs of going political are unclear. But, there are benefits.

The sports audience has not remained static. Politics is everywhere. It has replaced sports at metaphorical water-coolers. Things that were not political, such as declining to take a political stand, now are. Sports opinions that weren’t political now are. The sports news topics that have caught fire of late, such as Colin Kaepernick’s flag protest, are the ones that intersect with politics and social issues. ESPN “sticking to sports” runs the risk of irrelevance.

What is the audience for a straight breakdown of the chariot race results while Rome is burning? It better have been one hell of a chariot race.

Major brands, such as ESPN, are now expected to exhibit a political and social consciousness. They pay a cost when they are tone deaf. If there are now two Americas, ESPN (and sports leagues) will move with the one advertisers want to reach: young people, people with disposable income, and growing minority populations. (There’s a reason the Big Ten was scrambling to expand out of the Rust Belt.) FS1 has avoided becoming Trump Sports because those viewers who are the audience for the globalist World Cup.

One may find handwringing, woke millennials annoying and objectionable. Their values may conflict with sports culture. But ESPN is not going to survive long-term unless it reaches those viewers and gets them to watch sports. Cord-cutters are people under 30. TV watching rates among those under 20 should terrify everyone in the industry. It’s not clear ESPN’s political shift will engage those viewers, but it’s an attempt.