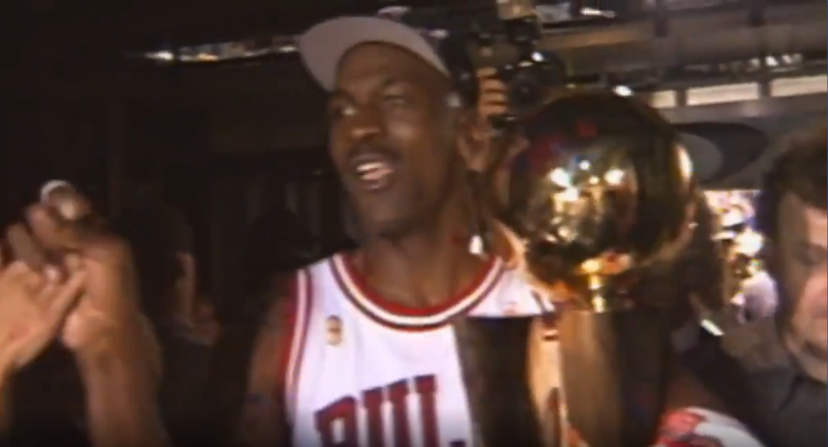 The premiere of ESPN’s 10-part 1997-98 Chicago Bulls documentary The Last Dance Sunday night did indeed beat ESPN’s 30 for 30 record (3.6 million for You Don’t Know Bo in the post-Heisman Trophy presentation slot in 2012; the premiere of OJ: Made In America drew 3.4 million in 2016 on ABC). As per  anESPN, the first airing of episodes 1 and 2 (at 9 and 10 p.m. Eastern respectively) averaged 6.1 million viewers across ESPN and ESPN2 for the two episodes (6.3 million for the first one, 5.8 million for the second one), with 3.5 million of those viewers in the 18-49 demographic. Re-airs of those episodes at midnight and 1 a.m. Eastern averaged 903,000 and 685,000 viewers respectively. Here’s more from ESPN’s release on how those numbers stack up in context to other events:

The premiere episodes rank as the two most-viewed original content broadcasts on ESPN Networks since 2004, surpassing the 2012 film “You Don’t Know Bo” (3.6 million). It is also the most-viewed telecast on ESPN since the CFP National Championship Game. Additionally, “The Last Dance” ranks as the most-watched telecast among adults 18-34 and 18-49 since sports halted across broadcast and cable networks.

…The Last Dance premiere dominated cultural conversation and interest as the #1 trending topic yesterday on Twitter and at one point, 25 of the 30 trending topics were all related to the show. It was also the top Google Search Trend in the US on Sunday.

The top markets here were Chicago (a 12.1 rating), Raleigh-Durham (6.5), Norfolk (4.9), Charlotte (4.7), and Greensboro (4.7), which make sense as the home of the Bulls and then areas around UNC (where Michael Jordan played in college). It’s also notable that the decision to put a language-censored version of the documentary on ESPN2 appears to have paid some dividends for ESPN; that added an average of one million viewers for the first episode and 800,000 for the second. (Some of those viewers may have watched a non-censored version if the censored one wasn’t an option, but that may not have gotten all of them, and they might have also drawn some complaints about the language that way.)

Overall, moving this up from the original June airdate appears to have worked out very well for ESPN indeed. And that comes at quite a good time for them, with a report last week that they’d seen a 62 percent year-over-year audience drop (with no live sports to cover) for the week ending April 12. So getting some viewers back is certainly important for them right now. We’ll see how the audience holds up for The Last Dance in the following weeks; episodes three and four air Sunday at 9 p.m. Eastern. (And those wanting to catch up on these first two episodes can do so on the ESPN app, or via reairs on ESPN at 7 p.m. and 8 p.m. Eastern Sunday.)