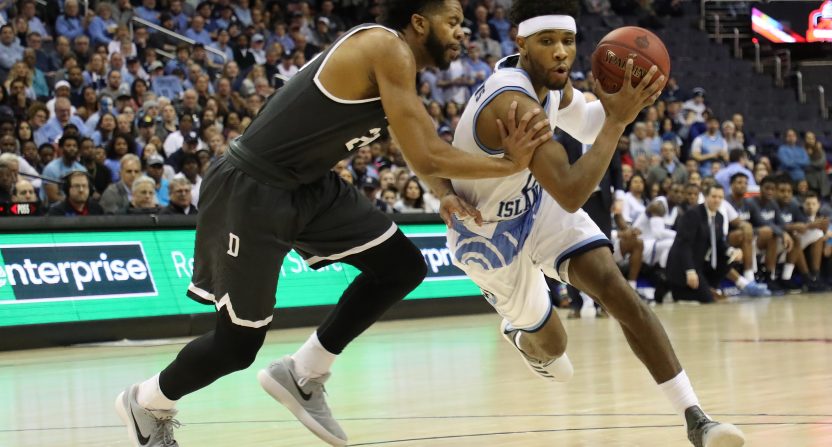 As ESPN has rounded up content for its streaming platform ESPN+, mid-major college sports have proven a key component of the network’s strategy. In March, ESPN agreed to an eight-year extension with the Sun Belt conference, with most games to air exclusively on ESPN+. In April, it came to a 10-year agreement with the Ivy League, again plotting to carry nearly all of the conference’s events on ESPN+. And now, in its biggest of these deal yet, the network has reached an agreement with the Atlantic 10 conference to stream more 500 conference events annually.

“ESPN+ has quickly established itself as a go-to destination for exclusive sports content,” ESPN executive Burke Magnus said in a release. “We are thrilled to add the Atlantic 10 Conference, carrying more games from the conference, including multiple exclusive championship events, than any other network.”

The ESPN-A10 deal extends an existing relationship between the network and the conference. Beginning in 2018-19, ESPN+ will carry 330 men’s and women’s basketball contests, as well as the 16 games on linear networks it previously aired. ESPN+ will also stream two opening round games from the men’s basketball tournament and four quarterfinals from the women’s tournament. In addition, ESPN+ will offer Atlantic 10 men’s and women’s soccer, field hockey, volleyball, baseball, softball and lacrosse.

The Atlantic 10 may not sound like a huge score for ESPN+, but these kinds of deals make a lot of sense for ESPN as it seeks to build the new platform. Now that ESPN owns the vast majority of Atlantic 10 basketball games, fans of any and all of the conference’s schools pretty much have to fork over $4.99 for ESPN+ if they want to watch their teams play. Dayton, VCU and St. Louis may not have the fanbases of Duke, Kansas and Kentucky, but they’ve got plenty of loyal supporters nonetheless, all of whom now pretty much need ESPN+.

ESPN’s strategy with ESPN+ seems to have been to grab a few viewers from here and a few viewers from there. Some golf fans, some boxing fans, some college hoops fans, some 30-for-30 diehards, etc. It’s not clear yet (and won’t be for a while), whether that’s working, but it seems like a solid plan — as the Atlantic 10 fans rushing to buy subscriptions will tell you.