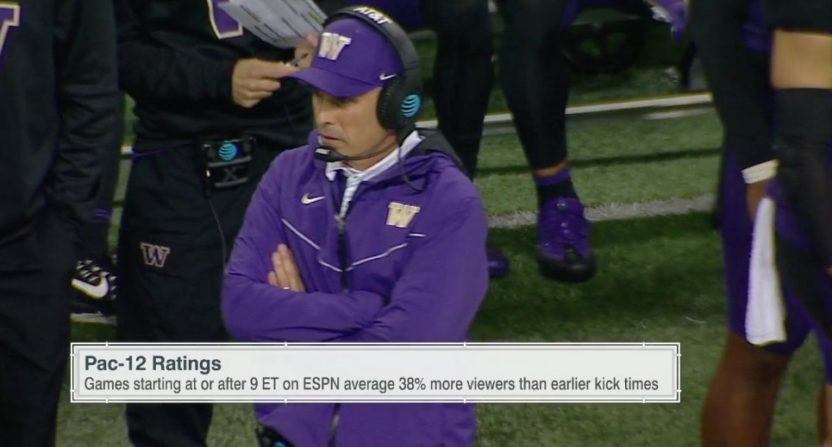 One of the more interesting storylines of the 2017 college football season was the University of Washington vs. ESPN. More specifically, the dispute was centered around Huskies coach Chris Petersen’s criticisms of late starting times to accommodate television. To put it rather mildly, Petersen was perturbed at 7:30/7:45 p.m. PT kickoffs which meant 10:30/10:45 starts on the East Coast.

ESPN promptly hit back during the Cal-Washington game on October 7, complete with graphics and commentary stating that its ratings for late night games are higher than earlier kickoff times. It was strange for a network to fire back like this, showing its wrath during a game broadcast.

It caught the attention of Washington athletic director Jen Cohen, who received text messages from fans and later saw the telecast at home. She told the Seattle Times that she was “extremely disappointed” at the tone of the broadcast and also seeing ESPN’s use of cupcakes to demonstrate the weakness of its non-conference schedule. Cohen said she had to muster all of her strength to prevent herself from attacking back.

“I felt more like that was such a disrespectful move for the people we play,” she said. “For those that do this, we do this because we love the kids. These are somebody’s sons, somebody’s brothers. They’re 18- to 22-year-old kids, and so I was more offended, not for us, as I was for our opponents.”

However, cooler heads have prevailed and Cohen said she received a phone call from an ESPN executive who apologized and assured her that it would never happen again.

“It was a class act, and he made the right call,” she said. “I think Chris and I feel like it’s time to move on.”

And making Petersen and Cohen feel even better was news that the Pac-12 had scheduled its October 28 game against UCLA at 12:30 p.m. PT, making it easier on fans who want to attend during the day.

ESPN and the University of Washington are have now made amends, and the Huskies get a coveted afternoon home game after all. Who said that peace couldn’t be achieved in our time?