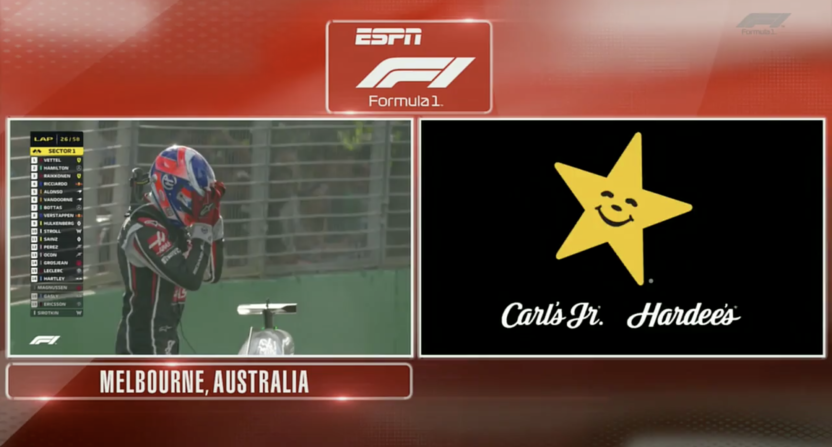 After being away for nearly 20 years, ESPN is back in the F1 world. And after Saturday night’s return to Formula 1, fans might have wanted ESPN to stay away.

ESPN ran into multiple issues ranging from things beyond their control and things being very much in their control and it was so bad that they issued an apology to fans who stayed awake throughout the night to watch the Australian Grand Prix.

ESPN specifically mentioned their On the Track pre-race show that is a half hour before the race. Unlike NBC and even the old Speed Channel where they produced their own F1 broadcasts, ESPN is instead simulcasting Sky Sports out of the UK. While Sky’s pre-race show seemed like it had no issues in the UK, as well as in the rest of the world, those in the United States saw a live shot of Albert Park’s Turn 9 with nothing happening, nobody talking and going to commercial twice. After about eight minutes, ESPN cut their losses and changed to an episode of E:60 until they were able to get back to the Sky broadcast.

If that was the only issue this weekend, it would be inconvenient but it wouldn’t have been a disaster. After watching all three practice sessions live and the race live, in addition to DVR’ing qualifying, there were more issues.

First, there was confusion about when the third practice was starting. ESPN advertised practice from 9:55 to 11 PM ET Friday night on ESPNNEWS both on their ESPNF1 Twitter account and on TV for DVR recording but practice didn’t start until 11. When viewers tuned in, they found an episode of E:60, the same episode that was played during the On the Track technical difficulties, and the broadcast started at 10:55. Practice was always set at the same time. Formula 1 or Sky Sports didn’t move the time or anything; the session was always set to start at 11 PM ET.

This caused some viewers in the United States to reach out to Will Buxton, who worked for NBC on their F1 coverage and now works for the series as a digital presenter who will host much of Formula 1’s digital and social media content. He did his best to direct people to the appropriate account because he doesn’t work for ESPN.

Sorry folks. You’re gonna have to direct these questions to @ESPNF1. https://t.co/XKKcDY6AtI

The most egregious instance of this was during the stretch from Lap 23 to 25. Haas F1, the lone American team in Formula 1, was having their best run in the history of the team. Kevin Magnussen and Romain Grosjean were 4th and 5th and were holding off the superior Red Bull cars. Magnussen pit first and when he came out, was forced to retire due to a pit gun issue that didn’t tighten one of his tires.

Any fan would know that if one person pits, it’s not going to take very long until the people around you, namely Magnussen’s teammate Grosjean, is going to come in and there’s a chance for a rare change of position.

Instead, ESPN went to a split-screen commercial (which is better than nothing), missed Grosjean’s pit stop and he had the same pit gun issue as Magnussen, therefore missing the turning point of the race — a turning point that involved both cars of the only American team in Formula 1.

Some may say that ESPN couldn’t have projected that but on the other hand, if you’re aware of the sport and know the pitting habits of the teams, maybe hold off of a commercial for a few minutes because of the potential of position changes, much less an issue regarding a team which many people in the United States are staying up to watch.

Oh, and if you plan to watch the replay on WatchESPN, you should know that their split-screen commercials are replaced with full screen commercials on there so you can’t even see what happened to Grosjean and you almost missed Sebastian Vettel coming out of the pit ahead of Lewis Hamilton under the Virtual Safety Car that ultimately resulted in him winning the Grand Prix.

And then, if that wasn’t bad enough, a few laps later — as Sky Sports broadcasters were starting to talk about the pit gun issues that resulted in denying the American team their best-ever points day — ESPN cut to a full commercial at mid-sentence and the viewers got nothing.

This is why there is a danger when a network simulcasts a sporting event rather than produces their own. ESPN is probably saving a ton of money by simulcasting Sky’s feed. And to many fans, hearing that they are getting Sky’s coverage, coverage widely regarded as the best in Formula 1, that sounds awesome on the surface.

But when you simulcast something, there is no communication between ESPN and Sky Sports. So when ESPN goes to commercial and misses a vital radio message or a big moment, the Sky Sports commentators aren’t going back and letting viewers know what happened because they’re doing a commercial-free broadcast.

NBC, when that situation happened in previous years, made sure they recapped what happened and dealt with the situation afterward because they produced their own broadcast. It wasn’t ideal at times, but they made the best of a bad situation.

Even with Sky Sports’ feed, which does have some of the best coverage in the world, is this really any better than when NBC had Formula 1? Fans might have accused NBC of having too many commercials during races, but at least we got commercials during some of the lower intensity parts of the race and didn’t have a commercial in between pit stops.

Surely, there is a better way for ESPN to go about it than this. I don’t know who was running the controls at Bristol for this weekend’s simulcast but if I had to guess, they didn’t know too much about Formula 1 because they seemed to lack the awareness of the situations happening during the race and inserted commercials whenever they wanted to. Maybe that’s a directive from someone higher, but the broadcast looked awful and was insulting to the diehard fans who stayed up in the middle of the night to watch.

People can forgive technical difficulties because it’s live TV; it happens. But with advertising the wrong times for practice and missing potential key moments of the race by going to commercial during pit stops, interrupting the commentary at mid-sentence, people are going to be understandably pissed off and this was a horrible first impression. Sky Sports’ outstanding coverage isn’t going to magically fix every issue.

In fact, ESPN’s coverage convinced me that when Formula 1’s OTT service launches, I’m going to get that. F1 TV will have commercial-free livestreams of races along with additional on-board cameras that you can watch at the same time. After seeing ESPN’s work, it’s worth the $8-$12/month to watch all the races on F1 TV and skip the middleman. So maybe ESPN was the perfect broadcast partner for Liberty Media. Because I’m willing to pay them to watch something that is included in my cable package because the alternative was so terrible.

ESPN is capable of being better and for their sake, I hope they get better. Formula 1 in the United States is a sport for diehard fans and it takes a special kind of fan to voluntarily stay up through all hours of the night to watch a race. If ESPN keeps pissing off those fans and there’s a legal alternative to watching Formula 1 in the United States, you’re going to see more and more people paying for F1 TV and ESPN will see their returns diminish before things even get started.