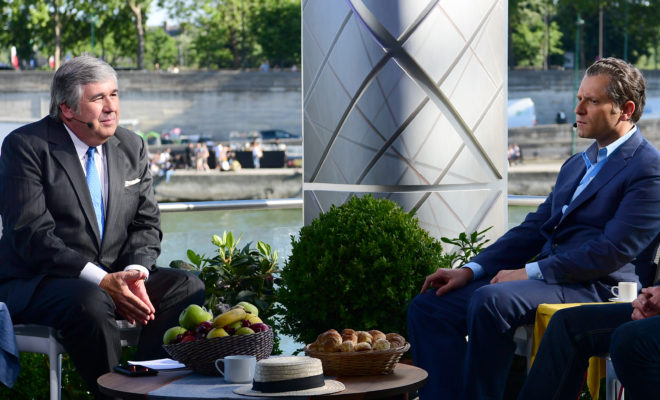 ESPN announced earlier today that it was ending its long-running discussion show, the Sports Reporters and replacing it with an hour-long edition of E:60. Now the Worldwide Leader has announced what the new E:60 will entail.

Not only will it bring a weekly edition of E:60 to the forefront, it will also include stories from the Outide the Lines crew. Bob Ley and Jeremy Schaap will co-host the new E:60. It means that both Outside the Lines and the Sports Reporters, long mainstays of ESPN’s Sunday morning lineup will be gone.

ESPN says while the Sports Reporters will be gone, the network’s commitment to storytelling and journalism still remains:

“ESPN has always been distinguished by its unforgettable news reporting and storytelling,” said ESPN Senior Vice President, SportsCenter and News Rob King. “And now we have a new, wonderful story to tell: a renewed commitment to the growth of the award-winning Outside the Lines and E:60 brands. It’s both a joy and a privilege to announce that Bob Ley, Jeremy Schaap and our entire community of enterprise journalists will enjoy even more opportunities to inform, enthrall and delight our audiences.”

“Sunday mornings may look, feel and sound different than they have for the past 29 years,” King said. “But we’ll always be warmly indebted to the brilliant, thoughtful, fearless men and women who graced the set of The Sports Reporters and enlightened fans everywhere.”

In addition to its new Sunday morning edition, E:60 will continue to ait primetime editions and various specials.

ESPN says both E:60 and the new look Outside the Lines will be produced from the same studios:

The new Outside the Lines will feature a whole new look and all-new formats, with a brand-new set housed in ESPN’s state of the art Digital Center 2, also home to all SportsCenter and NFL studio shows. The studio will be utilized by both Outside the Lines and E:60 and marks the first time they’ve had their own, dedicated space. Outside the Lines will also take its show on the road, originating from some of the top sporting and news events throughout the year.

While the Sunday morning chapter of the Outside the Lines/Sports Reporters will over soon, it opens a new E:60 chapter.

Outside the Lines began as a monthly primetime show in May of 1990 and in 2000, began its Sunday morning edition. It went daily three years later. It has won eleven Sports Emmy Awards and several journalism honors.

E:60 began as a primetime news magazine in 2007 and it was awarded eleven Sports Emmys of its own, seven Edward R. Murrow Awards and many other honors.

ESPN says additional details about the new E:60 and Outside the Lines will be released in the coming weeks.