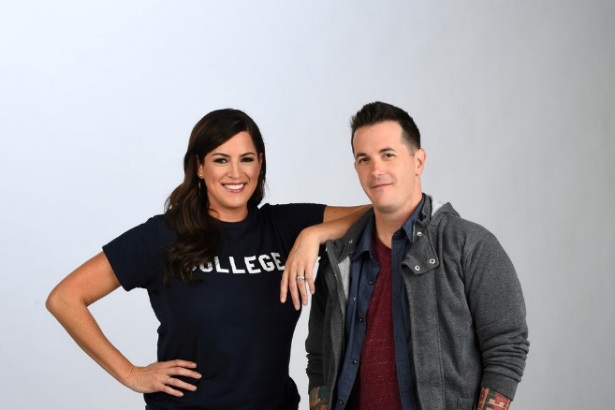 Jason Fitz and Sarah Spain saw so much success with their regular ESPN Radio program that the network has decided to give them both their own shows starting on Tuesday.

Fitz will host First and Last from 5-6 a.m. Eastern and then be a regular presence on Golic & Wingo during the week. That’s in addition to having his regular presence at major sporting events doing digital work on Twitter, Snapchat, and other new media platforms.

“You have the first shot at getting your opinion out to the world,” Fitz told Awful Announcing, excited to be the first voice people hear on sports when they wake up in the morning. He’s also thrilled to be joining his close friend Mike Golic Jr. and the entire Golic family and Trey Wingo, who he called a mentor since he started at ESPN.

“The opportunity to join that team it’s surreal for me right now,” he said.

Even though he’ll be working additional hours during the day, Fitz said ending his radio duties at 10 a.m. Eastern every day will actually make it easier for him to balance all his roles.

“To be real, it’s not my nature to go home and put my feet up at that point,” he said. “Everybody’s really working together to make sure we maximize the opportunities that I get, which is one of the coolest things that ESPN’s been really forward about with my career so far.”

Fitz said he expects to continue leading ESPN’s digital coverage of college football alongside Golic Jr. in the fall, most notably the popular weekly College Football Playoff rankings reaction show the pair hosts on Twitter Live. Fitz was also one of the original hosts of SportsCenter on Snapchat, a show he’s noticed that’s grown a lot since the network first launched it a little over 18 months ago.

“In that moment it was fun because you could walk around campus and people didn’t really know what it was going to be,” Fitz said. “I don’t think any of us knew when we started those Snapchat SportsCenter shows, we had no idea what we were getting into. Now we’re in a spot where it’s become something where everybody around campus not only knows about but really respects.”

Fitz said the NFL Draft digital broadcast he was just a part of generated millions of views when you combine Twitter, YouTube, Twitch, and all the other online streaming platforms.

“So it’s gotten the attention of everybody around campus and the respect of everybody,” he said. “They’ve watched it enough to see what we do.”

Spain & Fitz clearly also got enough attention for ESPN to break the show up and give the two larger audio presences. One of the things Fitz learned from Spain is that not only sports radio supposed to be fun and viewed as an escape, it’s also a place where you have to be willing and able to have hard conversations.

Spain and Company launches on Tuesday and will air weekdays from 6-9 p.m. Eastern with a cast of co-hosts that include, but aren’t limited to, Jason Goff and Jordan Cornette. Spain will also continue her work with espnW and studio programming. Spain won a Sports Emmy on Tuesday in the short sports documentary category with Identity: Deland McCullough’s Journey, an online story turned TV feature for E:60. Spain discussed that and much more on our most recent Awful Announcing Podcast.