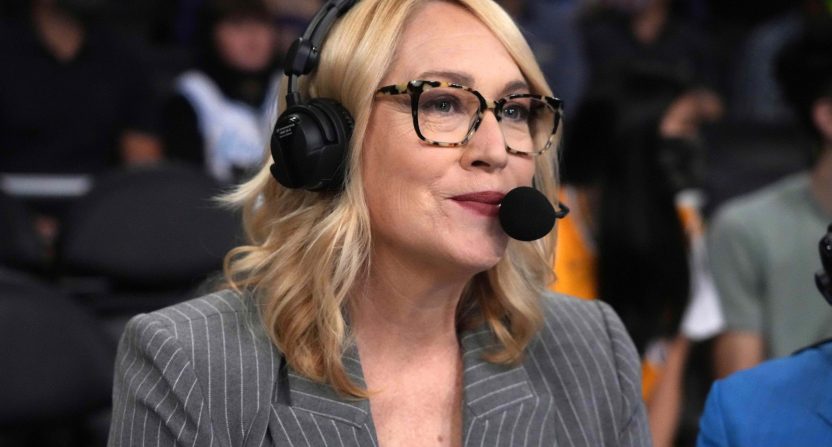 In a release today, ESPN revealed that the February 9th Warriors-Jazz broadcast will be led entirely by women.

That includes Beth Mowins, Doris Burke, and Lisa Salters on camera, of course, but the production on-site and in Bristol will also be staffed by dozens of women as well.

Three broadcasting pioneers will unite for the first time as a commentator team when Beth Mowins provides play-by-play alongside analyst Doris Burke and reporter Lisa Salters. In addition, the broadcast will be comprised of all women-led production and operations teams. In total, 33 women who are ESPN staff and personnel will occupy the pivotal roles on site in Salt Lake City, Utah and in the control room at ESPN’s Bristol, Conn. campus. These key behind-the-scenes roles include coordinating producer, producer, director, graphics producer, operations manager and technical director.

Coordinating producer Sara Gaiero offered her thoughts on the event:

“To work alongside these women and see the depth of talent we have in a variety of roles on this NBA property is incredibly rewarding. Each of these women make regular, valuable contributions to our NBA productions. I am so excited to watch them do what they do best – document an NBA game at the highest level.”

The Golden State-Utah game is certainly a marquee one, too, and it follows what could be a strong lead-in game between the Bulls and Hornets, a potential playoff preview. ESPN deserves some credit for putting this together, of course, but it’s also a nice reminder that the idea of having a majority of women working on and off-camera in sports broadcasting still qualifies as a special event.

But while games like these don’t solve inequality in the industry, it’s still probably a special night for a lot of people who will get to work that game. That’s not nothing, and while