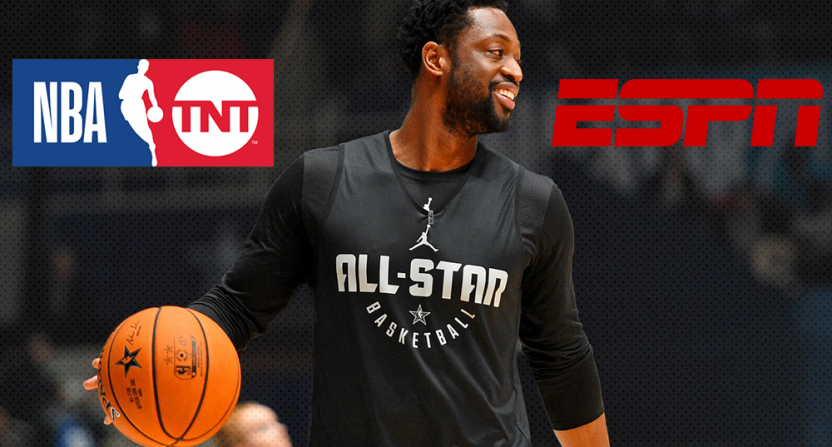 Dwyane Wade may have just retired from playing basketball, but it sounds like his time around the NBA is far from over.

The three-time NBA champion and 13-time All-Star seems like a no-brainer for a post-playing career in broadcasting. And according to the New York Post’s Andrew Marchand, ESPN and TNT have both begun the courting process for his services.

Per Marchand, both networks are preparing pitches for Wade, who could be a valuable addition to any number of studio shows or in-game commentary if he preferred. Wade has done some work for ABC and ESPN in the past during playoff coverage, but it’s not known if he would prefer to become a full-time analyst or not.

If he were to head to ESPN, Wade could be an ideal addition to NBA Countdown. Ironically, it might mean that he’d be sitting next to Paul Pierce, who caught a lot of flack a few weeks ago for saying he had a better overall NBA career than Wade. Wade defended himself on Twitter afterward so it’s unclear if he’d want to sit next to Pierce next year, no matter what ESPN might pay him.

Marchand alludes to the fact that some ESPN brass might want to replace Michelle Beadle as the host of NBA Countdown. And if that were to happen, the show might move from its new home in New York back to Los Angeles, which also happens to be where Wade and wife Gabrielle Union have a home. He also notes that other Countdown analysts like Pierce, Jalen Rose, and Tracy McGrady also have other commitments that could give Wade a chance to fill in rather than commit to a full-time gig. There’s also the chance that analyst Chauncey Billups leaves for a front office job with the Timberwolves, freeing up a seat.

As for TNT, the logical landing spot for Wade would be Inside the NBA, but it’s also unlikely that show will have any full-time openings for at least a while. Charles Barkley claims he’ll retire at 60, but that’s still four years away. Marchand wonders if TNT could bring in Wade as a part-timer and package him with some other programming while grooming him to step into a role on the show down the line. They have options such as NBA TV, as a game analyst, or plenty of other special programming options where Wade would make sense. As far as whether or not the commute to Atlanta would hamper Wade, he also lives in Miami, which isn’t too far.