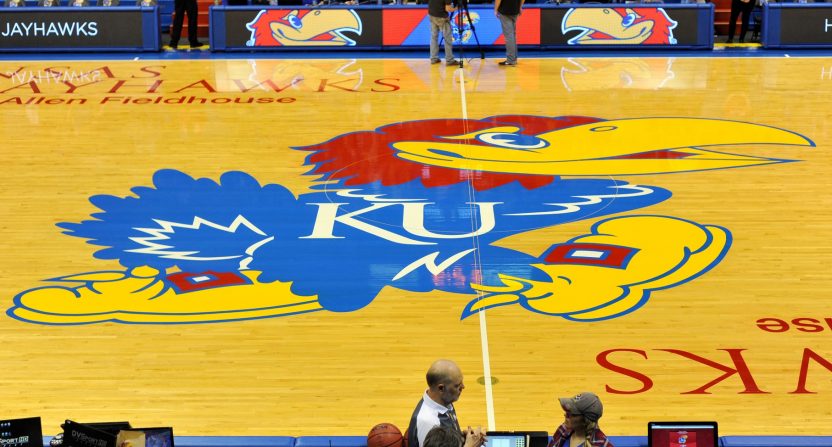 At the University of Kansas, men’s basketball is the main revenue driver, and clearly the most important athletic program for the school. That makes their inventory an attractive property, and since they play in the Big 12, a conference without a network (sorry, Longhorn), Kansas’s non-league basketball games don’t have a permanent home.

Or they didn’t, anyway, as yesterday the school announced that their university-produced Jayhawk Network will partner with ESPN+.

The award-winning in-house video unit of Kansas Athletics, Rock Chalk Video, will be playing a bigger role in the department as the result of an enhanced deal with ESPN, Kansas Athletics officials announced Thursday. Rock Chalk Video will produce a combination of nearly 200 live events and Kansas-centered shoulder programming during the 2018-19 academic year for the ESPN+ direct-to-consumer streaming platform and the ESPN app nationwide, without any blackouts.

In addition to ESPN+, KU fans will also be able to see various Jayhawk TV Network programming throughout the state of Kansas and in the Kansas City Metro Area on KMCI (38 The Spot, Kansas City), Spectrum Sports, Midco Sports Network, and Cox Cable.

That’s a big deal for the non-revenue sports, of course, but it’s also a big deal for national fans who will now have the chance to see the entire Kansas basketball season, avoiding national blackouts that had been in place until this year.

KU announces a change to its Jayhawk Network. All games will be available on ESPN+ now (a $5/month subscription service). Seems like a much better setup compared to the past, when some folks used to be blacked out from games in the state of Kansas.

Via Matt Tait at KUSports.com:

Frustrations from KU fans unable to see the six men’s basketball games broadcast only by Jayhawk TV during recent years are now a thing of the past.

Thanks to a new agreement between KU and its media partners, which includes an expanded lineup of Spectrum Sports, Cox Cable, KMCI, MidCo Sports Network and ESPN, the blackout associated with those six early season, men’s basketball games has been eliminated.

Jayhawk fans across the country, including in Kansas, now will be able to see every KU basketball game either through one of the cable providers listed above or via ESPN’s new direct-to-consumer streaming platform known as ESPN+.

Those six games (four regular season, two exhibition) are very important for ESPN and their ESPN+ effort, and it could be an example of how the direct-to-consumer service continues to build up inventory. $4.99 a month is worth it to diehard fans (and Kansas has plenty of those), but it’s also very affordable for more casual fans. And, on top of that, you also get the remainder of the ESPN+ inventory of programming, which runs a wide spectrum.

And that’s probably the model, at least at the start; target different areas of the market who might not want the entire ESPN+ catalog, but are willing to pay the reasonable monthly fee for what they do want. It does make it a great value if you’re interested in multiple aspects of what they offer; if you’re, say, a Kansas basketball fan living in Seattle who also loves MLS.

The struggle, though, will be managing to accumulate the rights packages to a point broad enough to offer something for everyone while also keeping the costs low enough to keep it worthwhile for those who are only subscribing for one team or sport.

ESPN clearly has a lot riding on ESPN+, and it will be interesting to see where things go from here.