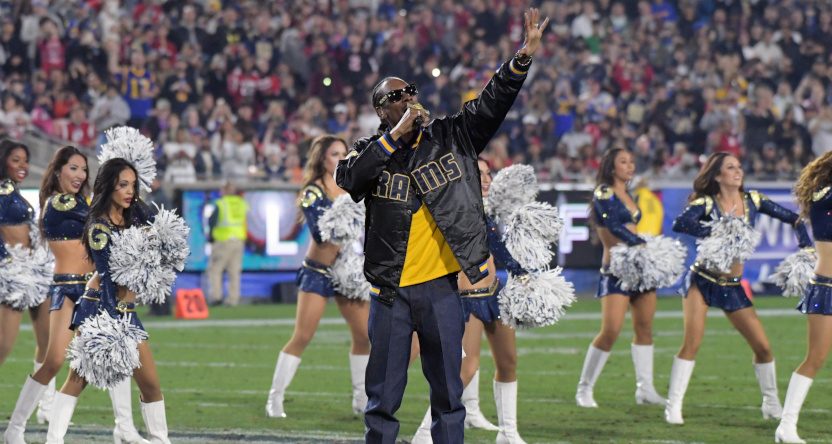 September 7 will mark 40 years since ESPN went on the air, and the Worldwide Leader is doing a whole lot to celebrate that anniversary. Maybe the most unusual part of the anniversary celebrations involves…a music video with Snoop Dogg (seen above performing at halftime at a 2018 NFL playoff game) and Queen Latifah singing “Rapper’s Delight,” with ESPN-focused lyrics and appearances from ESPN personalities? Here’s more on that from ESPN’s release:

Queen Latifah and Snoop Dogg recorded an ESPN-specific version of Rapper’s Delight, featuring a variety of ESPN on-air commentators.  The video will appear across ESPN platforms. The original song, sung by the Sugarhill Gang, debuted  September 16, 1979, one week after ESPN’s launch.

We can hear the screams of outrage from Phil Mushnick of The New York Post already, a columnist who has previously complained that Snoop Dogg can say the n-word and white people can’t (while calling him “a pornographer with a long arrest record”) and has criticized ESPN for associating with “racial slur rapper” Kendrick Lamar and for “frequent ‘special guest’ appearances of unspeakably and unprintably vulgar rappers who promote and cash in big on every heart-breaking, blood-spilling backwards stereotype of black America.” But aside from its value in ticking Mushnick off, this is an interesting choice.

Quirky songs and parodies can be fun content from sports networks, but bringing in Snoop Dogg and Queen Latifah to rap about ESPN executives is a heck of a way to go about it. And it maybe feels like overkill, especially for a network that’s gone through several rounds of highly-public, highly-criticized cost-cutting layoffs in the last few years. Yes, a one-off cost to bring in some musical artists isn’t the same as paying salaries over years. But Snoop Dogg and Queen Latifah still presumably don’t come cheap, so this is a bit of an unusual look for austerity-period ESPN.

And this is also a case where high budgets and production values don’t necessarily seem like a good thing. Part of the fun of those aforementioned sports network songs comes from them just featuring the networks’ existing commentators and being rather goofy and silly, and some of that seems to get lost if you’re just going to bring in Snoop Dogg and Queen Latifah. Then again, just having your existing commentators rap can also be a terrible idea, as Fox Sports showed with a cringeworthy rap about the NFL schedule at their 2017 upfronts:

Literally no idea what's happening at #FoxUpfronts. I'm fine with it pic.twitter.com/EO3n40bdge

Hopefully ESPN can clear that (very, very low) bar. At any rate, it will be interesting to see which on-air commentators are featured in this. (We’re guessing probably not Keith Olbermann, who said in 2017 he had “27 years of doubts about rap” until watching Eminem’s freestyle rap criticizing President Trump…then again, Olbermann has a remarkable talent for rebuilding napalmed bridges.) And we’ll see how whoever is featured does, and how this whole thing comes together. Whether it’s well-received or not, though, this video will certainly get views.

Beyond the video, there are also a lot of less controversial parts to this celebration. The biggest one appears to be SportsCenter Special: ESPN’s 40, an hour-long “collection of 40 testimonials from ESPNers past and present” that will air on ESPN2 Sept. 6 at 7 p.m. Eastern. (Yes, that’s the day before the actual anniversary, but Sept. 7 is a Saturday that will have ESPN’s networks filled with college football; it makes sense for them to do a retrospective like this on a night where it’s not interfering with live games.) Those testimonials will “showcase personal stories that connect to the company’s 40-year journey,” and will feature Chris Berman, George Bodenheimer, Linda Cohn, Bob Ley, Molly Qerim Rose, Bill Rasmussen, Robin Roberts and Stephen A. Smith, among others. Also on Sept. 6, at 9 p.m. Eastern, “ESPN commentators will celebrate the 40th anniversary and share anecdotes during a live 30-minute, interactive, stream on Twitter, ESPN.com, the ESPN App and Facebook.”

ESPN is rolling out some other anniversary initiatives as well. Berman will count down the top 40 sports moments since the network’s launch in a four-day SportsCenter series, with 10 moments featured each day across all episodes of the show (beginning Sept. 3 and ending Sept. 6). On Sept. 10 at 7 p.m. Eastern, E:60 will tell the story of the first game aired on ESPN (a professional slo-pitch softball game between the Kentucky Bourbons and the Milwaukee Schlitzes), including recently-discovered footage from that. There’s also an ESPN Archive channel coming to YouTube and an “Ultimate SportsCenter Quiz” coming to ESPN.com and the ESPN app. So there’s no shortage of anniversary stuff going on here. But it’s the rap video that we’ll really be keeping our eyes out for.