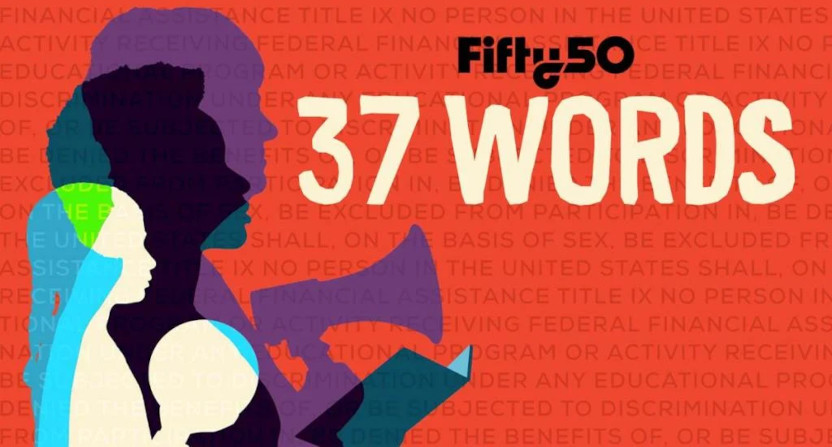 When it comes to Title IX, many of us fall into two camps. Some are aware but misunderstand it, much like the First Amendment. And then some are aware but don’t fully grasp the context. On the 50th anniversary of Title IX, new four-part ESPN docuseries 37 Words (part of the company’s Fifty/50 Month of Title IX anniversary content) delivers a comprehensive examination of the legislation’s  past, present, and future.

We tend to think of Title IX in terms of women’s sports. That’s understandable. Often when it’s in the news, it’s about equality—or a lack thereof—in sports. But it’s important to know that Title IX is a civil rights law, prohibiting sex discrimination in educational institutions that get federal funding.

The name of this docuseries, from ESPN Films, Industrial Media, and Trilogy Films, refers to the 37 words in Title IX of the Education Amendments Act signed into law by President Richard Nixon on June 23, 1972:

“No person in the United States shall, on the basis of sex, be excluded from participation in, be denied the benefits of, or be subjected to discrimination under any educational program or activity receiving Federal financial assistance.”

This federal law includes athletics, and the impact of Title IX continues to reverberate today. Before Title IX, there wasn’t this type of legal protection for women, who were being denied opportunities in high schools and colleges simply because of their sex. In a chauvinistic society, the powers that be (men) didn’t think women wouldn’t be interested in or needed sports.

Title IX made these Neanderthal practices illegal. But change doesn’t automatically happen once words are put on paper. Laws need to be enforced. Institutions must act. And people may still have to fight for equal treatment.

Change can be slow due to so many obstacles.

37 Words highlights the struggle by telling the revealing stories of the women who fought and continue to fight for basic rights. The docuseries is in four parts, with the first two segments airing Tuesday and the final two on June 28.

Parts 1 and Part 2 focus on pioneers such as Billie Jean King and Ann Meyers Drysdale. Part 3 and Part 4 look at the first generation to grow up with Title IX and the challenges Title IX faces today.

Directors Dawn Porter and Nicole Newnham smartly forgo voiceovers and let the women tell their own stories. Many are insightful, many moving, and some heartbreaking. What will be jarring to hear, especially for younger viewers, is how a lot of men at that time spoke with sexist tones and attitudes right to women’s faces.

King is one of our greatest living Americans. She not only helped create professional women’s tennis, but is also a longtime equal rights activist.

There’s a scene showing archival footage of the tennis Hall of Famer being asked by a male interviewer: “Are you an angry woman? What are you angry about?” King keeps her cool and responds by saying “I’m not angry about too many things anymore. I think back in the old days when I was playing as an amateur tennis player I was upset with the way the system was run. I very much wanted to see a professional side to this sport.”

The docuseries cuts to the now 78-year-old King, who says “My life was much more than about tennis. Tennis was the vehicle to try and help make the world a better place.”

While people like King helped get the ball rolling, the 1996 gold-medal-winning U.S. Olympic women’s soccer team helped push the fight for equality to another level. 37 Words features stars like Julie Foudy, Mia Hamm, and Briana Scurry who played in the first-ever women’s soccer event at the Olympics. They continue to inspire so many.

37 Words devotes a lot of time to equal pay, facilities, equipment, and opportunities. But it also recognizes Title IX’s role in combating sexual harassment. These horrific stories are difficult to listen to, but important to hear.

The final part of the series points toward the future. There are still many who are attempting to alter, undermine, and/or minimize Title IX. The most prominent battle might be against those who are weaponizing the law to justify banning transgender athletes from competing in sports.

But as 37 Words notes, Title IX isn’t just about protecting the rights of women and girls. It’s supposed to protect all genders. Ultimately, this ESPN series is a reminder of how far we’ve come in 50 years but also, how much further we need to go.

37 Words debuts Tuesday (Parts 1 and 2) and June 28 (Parts 3 and 4) at 8 p.m. Eastern time on ESPN. Each part of the series will be available on ESPN+ following its premiere.