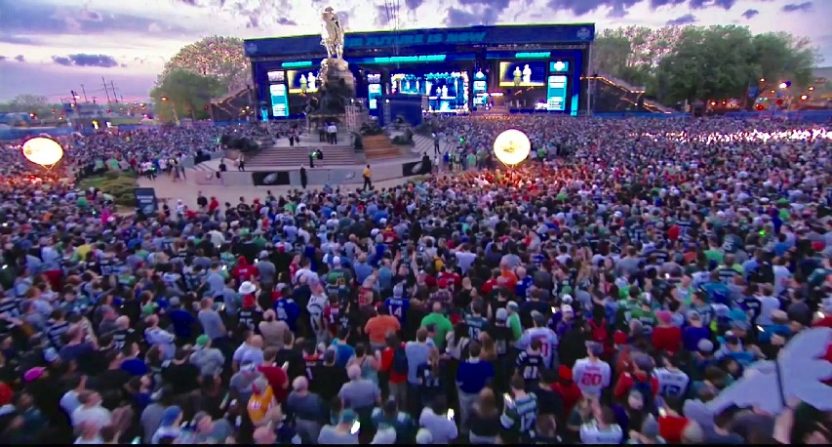 It’s been a difficult, terrible week for ESPN with the mass layoffs that occurred, leaving several familiar names and faces looking for work, while those remaining with the network had to soldier on without former colleagues and friends.

But ESPN’s coverage of the NFL Draft has always been one of the network’s signature broadcasts, and it was surely a relief to just move ahead with an event and get lost in the proceedings. While those who otherwise may have been part of the telecast were missed, there was a feeling that the show must go on. How did a new day of NFL Draft coverage fare in the post-Chris Berman era? Let’s get out the red pen for some grades.

ESPN can’t take credit for the NFL’s decision to hold the draft at the Philadelphia Art Museum. But the location sure helped create some beautiful visuals for establishing and overhead shots throughout the draft, especially with angles showing Duchamp’s Fountain surrounded by the crowd with the draft stage in the background. As silly as this might sound, this was the best looking NFL Draft broadcast ever, and ESPN cameras took full advantage of the setting and space.

The NFL also provided the ESPN telecast with a great TV moment when 14-year-old cancer survivor T.J. Onwuanibe announced the Baltimore Ravens’ pick as part of the Make-A-Wish program. The kid’s fist pump was one of the best things from the entire night.

ESPN did create some fun visuals of its own, however. One of the best graphics of the evening was the animation package that illustrated the impressive athletic accomplishments that run through Christian McCaffrey’s family tree. The telecast could have used more of that, though maybe McCaffrey’s story was ideally suited for such embellishment.

This was Wingo’s first year anchoring ESPN’s NFL Draft coverage from the very beginning, rather than taking over the big chair after Round 1 as he has in recent years. Without Chris Berman, there was already going to be less to complain about with this year’s broadcast. But it was still a nice touch by Wingo to acknowledge Berman and a new era at the start of the telecast.

“For almost four decades, the man sitting in this seat was named Chris Berman,” Wingo said. “He made the draft fun, he made it an event, he made it interesting and entertaining. And Boom, in your honor, we’re going to keep that tradition going tonight and as long as we continue to do this draft.”

Thoughts thus far on either ESPN or NFLN’s draft broadcast? 4 man stage with Wingo seems like a big upgrade.

Wingo was typically professional, relying less on gimmicks or tipping picks to look smart, and letting the analysts shine. Maybe he was a bit more bland because there was less to make fun, less that just seemed odd. But he also showed a bit more humor in acknowledging the Philadelphia crowd, especially when it came to its hatred of the Dallas Cowboys.

Really, the only thing we can ding Wingo for is mixing up his furry creatures. (Although he also mixed up his Cadillacs between Anderson and Williams.) After defensive end Charles Harris had been drafted by the Miami Dolphins, a shot of Harris’s family and friends included a giant furry man. Wingo called him “Chewbacca.”

Maybe that pleased the bosses at Disney, and maybe Wingo wasn’t playing along with the blatant sponsorship. But the Jack Links people had to slap their head that their Jerky Sasquatch wasn’t acknowledged. At least they had Harris wearing a Jack Links shirt.

Kiper came in hot, nursing some irritation over many other draft analysts and fans criticizing defensive end Myles Garrett’s merit as the possible No. 1 pick, in addition to the Cleveland Browns even entertaining the thought of selecting quarterback Mitchell Trubisky.

“I am sick and tired of hearing people criticize Myles Garrett!” said Kiper, as his glasses nearly fogged up. Even if he talked too fast and maybe tried to fit too much information in, he did a good job of explaining why Garrett was the better pick, how the draft works andwhy a team shouldn’t reach for a need with a top selection.

Fortunately, Kiper didn’t use up all of his energy and calmed down through the rest of the telecast. The early run on skill position players — especially running backs such as Leonard Fournette and Christian McCaffrey — gave the show an opportunity to breathe and tease Kiper about his strong feelings toward not using first-round picks on running backs. Some more commentary on that, however, would have been welcomed.

Gruden improved some over last year, being a bit more critical in pointing out the flaws of several top picks like Garrett (effort, goal line attack) and Trubisky (picking up blitzes, running two-minute offense). It’s also fun when he needles Kiper over disagreements on certain players. But Gruden still comes off as doing too much schtick with his analysis.

Gruden has noted dropped passes for Corey Davis and poor tackling for Malik Hooker. Those skills seem, uh, important for their positions.

Considering Gruden calls games and presumably talks to coaches for Monday Night Football, it would have been helpful to get some insight into why there was such a run on offensive skill players early on. What has changed with offenses and roster-building philosophies around the NFL? Gruden was too locked in what he was already going to say on players, instead of looking at some trends.

Riddick has become such a welcome presence on ESPN’s NFL Draft coverage. Let’s be thankful that he didn’t end up taking a general manager job in the league, so he could lend some insight — especially into how a particular player fits with a team’s personnel. (Considering he interviewed for the 49ers’ GM position, could he have explained that team’s thought process a bit more? Maybe, though that might have been seen as unprofessional.)

Louis Riddick is always interesting to listen to..makes tons of sense..I love listening to smart guys discuss any sport..not enough of them

His analysis may have been most beneficial when the Tennessee Titans surprisingly picked wide receiver Corey Davis at No. 5, but Riddick had a ready comparison to his skill set in Oakland Raiders receiver Amari Cooper. He also provided a nice counterpoint to Gruden and Kiper gushing over quarterback Patrick Mahomes after being selected No. 9 by the Kansas City Chiefs. While his colleagues were touting Mahomes’s big arm and gutsy throws, Riddick pointed out how much development he needs to be successful in the NFL.

ESPN NFL insiders didn’t have to deal with anything as urgent or curious as last year’s Laramy Tunsil controversy. Schefter was put to work right away with the Chicago Bears trading up to No. 2, presumably to pick defensive end Solomon Thomas. Maybe his sources gave him a bit of a smokescreen, but that helped add to the surprise when Chicago selected Trubisky.

Unfortunately, the lack of news made the reporting crew seem much less vital during the telecast. It’s not their fault there wasn’t much news to report. There wasn’t much added to the trades that were made, and rumors that were rumbling such as the Browns pursuing Washington Redskins QB Kirk Cousins weren’t addressed.

At least 24 teams personally have called OSU's Gareon Conley over the past 48 hours, per source. He has proclaimed his innocence to all.

Schefter’s best moment was when he reported that the Ravens submitted defensive back Gareon Conley to a lie-detector test in response to the rape allegations against him. Though many viewers did not care for Schefter’s brief editorializing, saying Conley “made a bad decision that night.”

It was nice to see Mortensen back on ESPN, noticeably thinner, and he provided an early chuckle when he slipped with a “San Diego” Chargers, rather than “Los Angeles.” He also provided some background on players such as Marlon Humphrey and why he may have slipped. 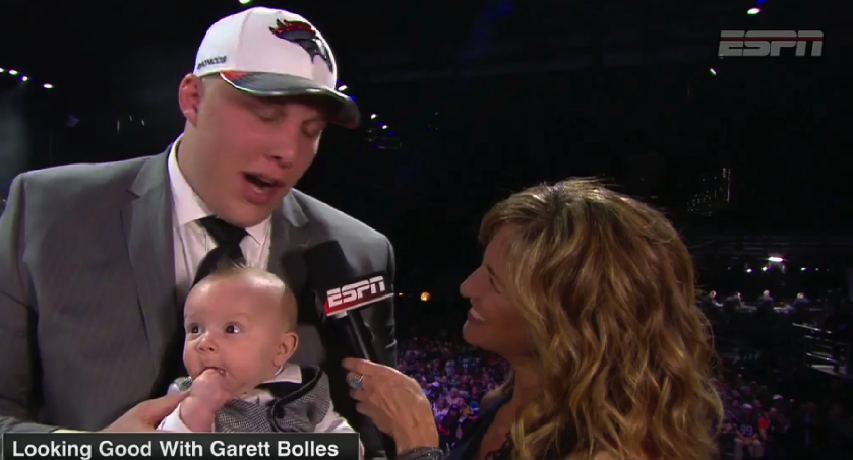 Kolber helped convey most of the human moments from Thursday night’s telecast. When players like Garett Bolles brought his baby (nattily attired, by the way) to the stage and Takkarist McKinley carried a framed picture of his late grandmother with him, she was quickly there for an interview to provide more context on each player (especially with Bolles’ troubled background) and their draft stage accompaniment.

(Unfortunately for Kolber, McKinley’s interview with Deion Sanders on NFL Network drew more buzz, since he dropped a couple of profanities on the air.)

Kolber also did a nice job of covering Deshaun Watson’s story, particularly how Watson’s mother benefited from a charity for homeless mothers established by former NFL star Warrick Dunn. Watson’s mother also fought cancer forcing her son to work to support the family, something few college players have to deal with. The story obviously resonated with Kolber, and it was clear that she enjoyed getting to interview Watson and his mother at their best point in a touching conclusion.

To be fair, this should probably be an incomplete grade since reporters weren’t utilized much. Randy Moss was on site at the NFLPA party with Myles Garrett and asked him an amusing question about which AFC North quarterback he’s looking forward to meeting first. It would have been nice to get some insight as to whether or not Garrett thought he might not be the Browns’ guy at No. 1, but Moss got caught up in the moment.

Assigning Sal Paolantonio to the New York Jets was savvy, as their No. 6 selection was pivotal in the first round. He reported that safety Jamal Adams was their guy, and the Jets selected him shortly thereafter. It was difficult not to think about Ed Werder’s absence during the telecast. He was assigned to cover the New Orleans Saints, and some insight into how the team wanted to improve its terrible defense would have been welcomed. 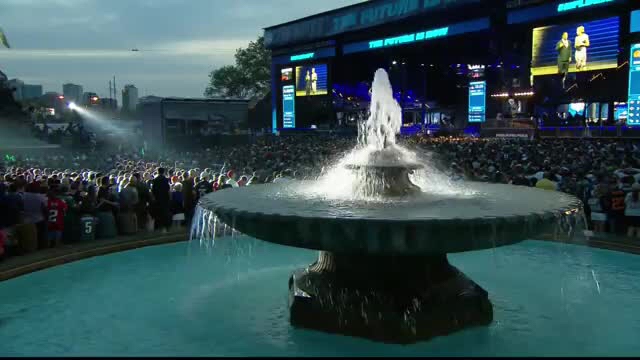 Without Berman’s bluster, ESPN’s 2017 NFL Draft coverage felt less personality-driven, which was a welcome change. The setting and the moments were allowed to speak for themselves, and each analyst got sufficient opportunity to make their points without talking over one another. No one dominated, as Wingo kept the show running smoothly.

Though there were plenty of surprises with the trades made, especially early in the first round, and ESPN’s team was on top of that news, it’s unfortunate that the broadcast can’t be a bit more agile in responding to trends that developed as the evening progressed.

Granted, trades can’t necessarily be anticipated and can change the flow of a draft. But an early run on skill positions, few offensive lineman selected, and a load of strong defensive players available at the end of the first round could have used some commentary. Addressing what’s happening as it unfolds, not just the players selected, could have made this an A-level telecast.