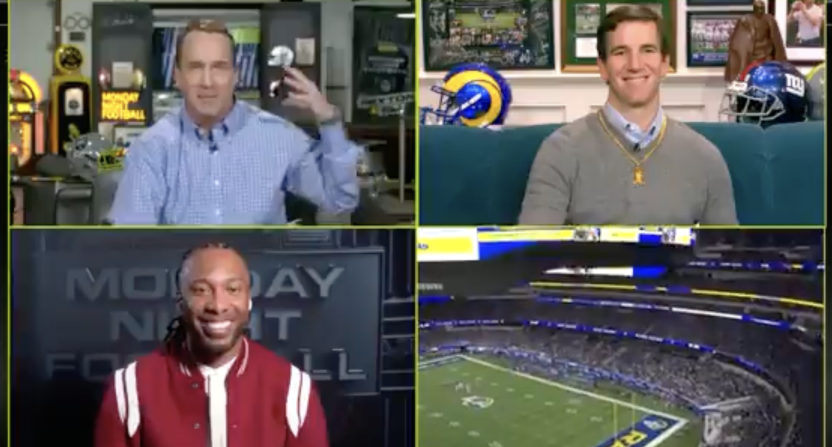 An interesting part of the ManningCast (or Monday Night Football with Peyton and Eli, if you work for ESPN) is the banter between hosts Peyton and Eli Manning. The two of them regularly make fun of each other, and their dynamic is a big part of what’s made it work (and has even showed up in various ManningCast parodies). The brothers spoke to Jeff Agrest of The Chicago Sun-Times ahead of Monday’s ManningCast (Bears-Patriots), and had some interesting lines on that dynamic:

The ManningCast, Peyton and Eli’s take on "Monday Night Football," will air opposite #DaBears-Patriots game Monday on ESPN2. I had the pleasure of talking about it with the Mannings. https://t.co/pKeplW50aL

Here’s more on that from Agrest’s piece:

Eli, who does the show out of his basement, had no desire to enter broadcasting after he retired in July 2021. He didn’t think he’d be good at it, and he, too, didn’t want to travel and be away on weekends. But what especially drew him to doing the show was working with Peyton.

“There’s that brotherly back-and-forth where I make tons of mistakes, and before the media has a chance to call me out, Peyton’s going to call me out,” Eli said. “We never miss an opportunity to call each other out for a mistake or being completely wrong. We’re very blunt and honest, but we’re not sensitive to it, and I think that’s what makes it very authentic.”

Said Peyton: “Eli likes to make fun of my forehead a lot. He calls it my five-head. I have thick skin, growing up with two brothers [Cooper is the oldest], so you take that. But before every kickoff, Eli and I have a reminder: ‘The viewer is sitting right between you and I and watching it with us. Let’s make it fun, and hopefully the audience is having fun, as well.’ ”

The ManningCast is hardly the first or only alternate broadcast. ESPN started multi-feed broadcasts in 2006, originally with a Full Circle brand, then resumed them on a regular basis in 2014 under the MegaCast brand. They’ve also done other one-alternate-feed efforts with Peyton’s Omaha Productions, including CFB Primetime with The Pat McAfee Show, the KayRod Cast (with Michael Kay and Alex Rodriguez), and a Joe Buck-hosted PGA Championship alternate feed. But the ManningCast has been extremely successful by the standards of these alternate broadcasts; Agrest notes that ESPN has done more than 100 alternate broadcasts of some sort since 2014, and the ManningCasts account for all of the top 12.

Some of that is about the games the Manning brothers are covering, of course. Monday Night Football itself draws large audiences, and while the ManningCast portion of that overall audience isn’t huge, it’s still pulling in good numbers (it’s averaged 1.6 million viewers over 10 broadcasts last year, 1.5 million over three so far this year) and creates a lot of Twitter buzz and discussion. (Much of which is of a significantly nicer tone than the discussion about ESPN’s main MNF broadcasts in the past, although that was before their big move for Joe Buck and Troy Aikman.) The ManningCast is also currently the only MNF alternate feed, so that gives it an audience advantage versus a CFP MegaCast with a lot of feeds to choose from.

But beyond that, the Manning brothers have regularly delivered a compelling and watchable alternate feed, and have nicely mixed guest interviews (like the Jan. 17 one with Larry Fitzgerald seen at top) with calling the action. (Eli gave Agrest some good thoughts on how they balance that, including asking guests ‘Hey, what would you call right here?’ when the game gets to a critical point). There’s more to that than just their chemistry and brotherly dynamic, but that dynamic is certainly a significant part of it. So it’s interesting to read their thoughts on how important that is to them.