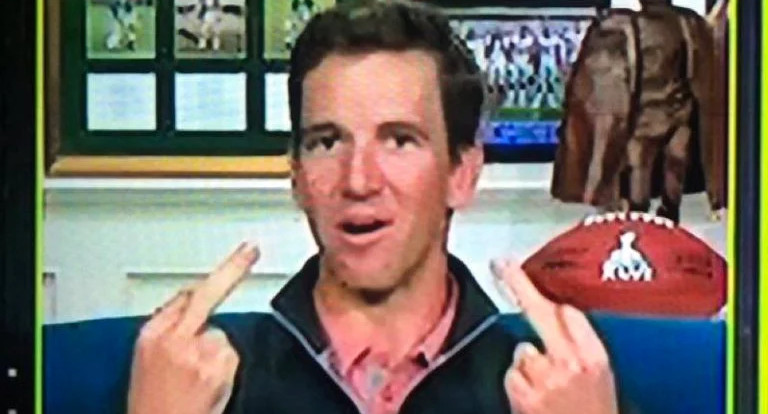 There are always people willing to complain about cursing and profane gestures, and a few of them crawled out of the woodwork in the wake of Eli Manning’s double bird on the Sept. 27 Monday Night Football ManningCast on ESPN2 (which he dropped while telling a story about young Eagles’ fans who used to flip him off, and apologized for later in that same broadcast). The Federal Communications Commission (FCC) specifically indicates that “generally, the rules concerning the content of programming on cable channels are not as strict as the rules concerning programming content on non-cable channels,” but that didn’t stop three people from choosing to file FCC complaints about Manning’s gesture. TMZ has more on that:

“On ESPN ‘Monday Night Football’ Eli Manning used profane gestures that were despicable and unacceptable and fines should be levied,” the viewer from West Chester, PA said in the complaint. “Young Americans should never be exposed to something like that, it was disgusting.”

Another wrote … “Mr. Manning’s actions are offensive to me as a viewer. It was also offensive as a Philadelphia native and sports fan. There was young children watching that broadcast last evening.”

“The FCC should take all appropriate enforcement actions against Mr. Manning and/or ESPN for Mr. Manning’s conduct to hold them accountable to send the message that that type of behavior (even if he was re-telling a story) is not acceptable, including all appropriate fines.”

A viewer from Tumwater, WA went as far as to demand Eli get banned from the airwaves.

The Helen Lovejoy-level of “Won’t someone think of the children?” is particularly funny in this case considering that Eli was literally telling a story about children flipping him off. Clearly those children at least knew how to flip a double bird without being shown on a Monday Night Football alternative feed. And for that, we commend them. The labeling of this as “despicable” and “disgusting” is also humorous; even Joe Buck thinks that’s a little much.

It seems highly unlikely this leads to much of anything. Yes, FCC complaints sometimes lead to fines. But even the most famous one of those (an attempted fine of $550,000 against CBS and Janet Jackson after Justin Timberlake exposed Jackson’s breast during the 2004 Super Bowl) was one the agency eventually lost on appeal. And it’s also interesting that this particular incident led to some complaints, as it’s far from even the most explicitly obscene thing on ESPN recently; that might be the unbleeped f-bomb they played on SportsCenter in September in a clip from their own 30 for 30., which they immediately apologized for.

And three complaints is just a particularly funny number, especially considering that the FCC got 1,312 complaints after the 2020 Super Bowl halftime show, largely about “sexualized” dancing from Shakira and Jennifer Lopez. And that led to very little. Of note, Eli did the Dak Prescott hips dance and said “I’m like Shakira” earlier in this particular ManningCast. If anything there deserved a FCC complaint, it was his dancing, not his double bird.