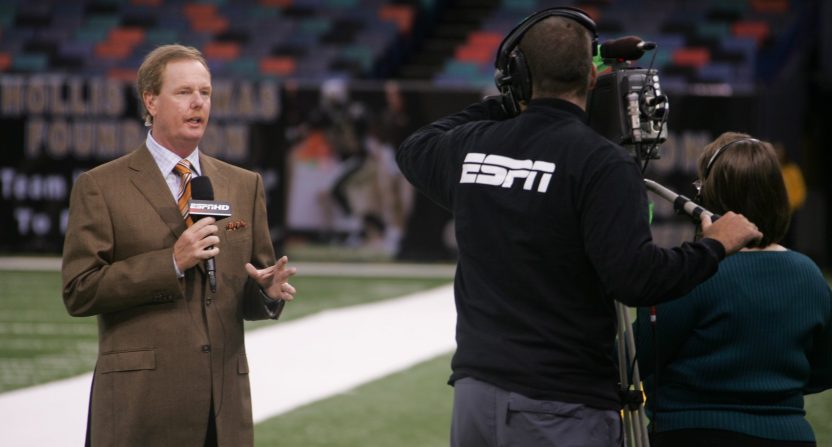 Last week, ESPN rocked the media world by laying off about 100 front-facing employees, including some big names. Among the most prominent layoffs was longtime NFL reporter Ed Werder, who on Monday used his new Dallas Cowboys podcast with Matt Mosley to share his thoughts on being fired and on ESPN’s direction.

Werder said he did not see the end coming but began to worry based on something his colleague Chris Mortensen told him.

I did not know when I agreed to do the Doomsday Podcast with you that I would be able to devote myself to it full-time. I had no idea.

We knew ESPN was going to have significant layoffs of so-called “talent” … We knew there was going to be a significant talent cut. I had not accepted that my name might be included, although I had not eliminated the possibility. And here’s why I was concerned: Our good friend Mort after the season had told me that his understanding was that these cuts were going to be made and the quality of work was not going to be in consideration. So, it seemed to me that the quality of work should be the only consideration. If it’s not any part of the equation, then I kind of find myself a little vulnerable under that criteria.

He then explained how his firing went down and revealed the ESPN asked if he would stay on through the NFL Draft.

So anyway, I got a text message to call my boss, who’s in charge of the NFL project at ESPN. So I did that, I did that knowing that unbelievably under the circumstances I was going to get laid off. And that is what transpired. And my boss had a human resources person in the room, and that just verifies for all certainty that you are going to be laid off.

And so when they finished telling me I was laid off, they said this was effective immediately, and the next thing they told me to do as a former employee of ESPN was stay and cover the Saints’ draft, which seemed like an odd way to begin your unemployment. But it seemed like it was my option, and I chose not to. I just didn’t feel like it was the right place for me to be, alone in a hotel room and then out in public as a former employee, representing ESPN with the New Orleans Saints.

Asked by Mosley about being the face of the ESPN layoffs and appearing prominently in coverage by outlets like the New York Times and Washington Post, Werder said he took it as kind of a compliment, referencing an amusing Michael Irvin quote.

I guess the fact that my name and my video doing an interview was covered by Lester Holt on the NBC Nightly News and it was the headline in the two publications that you mentioned, it kind of reminded me of something Michael Irvin told me once. I was on a flight with him, and he said, “I’m going to give you a piece of travel advice.” And he said, “Make sure when you get on a plane, make sure you’re the biggest celebrity on a plane.” And I said, “Why is that,” and he said, “Because if the plane crashes, you want to be the headline, you don’t want to be listed in also killed.” And so he was telling me to get off the flight, for one thing, and the other thing is I guess I succeeded in some odd way in at least being the headline or one of the headliners in who got lost to ESPN.

Werder said he has been sleeping in and hanging around the house in his new free time.

Werder also explained why he changed his Twitter handle from EdwerderESPN to EdwerderRFA. The “RFA” stands for “restricted free agent,” a reference to the onerous non-compete clause he’s under for the rest of his contract.

ESPN has told me, and I’m sure all of the others who were let go, that they’re going to honor our contracts. At the same time, their expectation is that we are going to honor those contracts. And what I’ve subsequently found out by having dialogue with a lawyer through the legal department is they are not anticipating allowing you to negotiate your way out of your contract. They’re allowing us to go pursue other opportunities if there are some, but if you get a job you want, what I’ve been told is, then you have to take the job knowing you’re not going to be paid by ESPN. They’re not going to double-dip. They’re not going to just offset.

So I feel a little like Brett Favre when he left the Packers, in this way: Favre was most angry about the fact that the Packers, in his mind, took away his team, then denied him the opportunity to go compete wherever he wanted to. And what he wanted to do was compete against them. And his point was, “You think I’m no good, so what do you care where I go? Why can’t I just go play for the Minnesota Vikings and we’ll see if I’m any good?”

Apparently if I want to continue being paid by ESPN for the duration of my contract, they will not allow me to work in television or other media without risking all that they owe me—except for the podcast, which I had gotten clearance in advance on.

Werder noted that many good people lost their jobs last week and questioned what message ESPN is sending about its direction. He also mentioned the names of some apparently laid-off colleagues who we hadn’t heard about previously.

It’s not the quality of your work that’s a factor. Well, it causes me to wonder, what is ESPN about? Because I thought it was about news and information and highlights, and I’m not sure that is the point of emphasis anymore. How is ESPN going to cover the NFL without all of the people who lost their jobs. What happens without Merril Hoge and Ron Jaworksi to NFL Matchup? What happens to NFL Insiders without a number of analysts, former general managers like Joe Banner and Mark Dominik. Are we really about to see a time when ESPN can no longer afford to cover its most valuable property in the way that it has?

Werder said he has gotten an outpouring of messages, including from NFL coaches and general managers and said he was most surprised to hear from commissioner Roger Goodell, who was “angered.”

All of this is a lot to process, both for Werder has he heads into restricted free agency and for the rest of us and we try to figure out what the hell ESPN is doing.