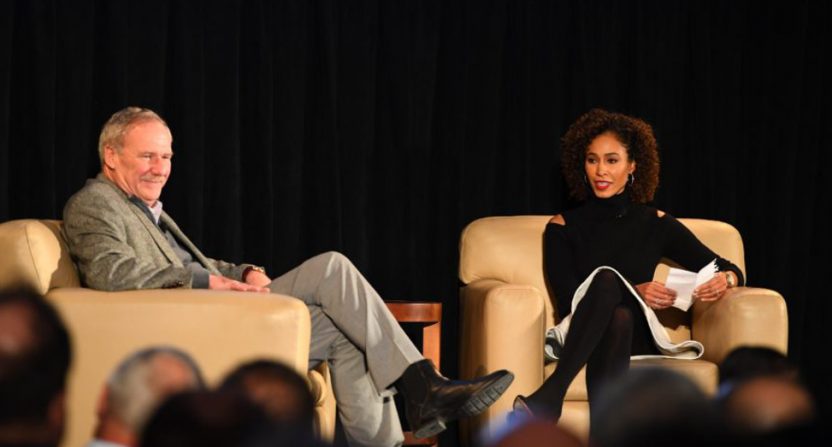 The news of ESPN head of ad sales Ed Erhardt announcing his exit as of early 2019 would be notable enough in its own right. Erhardt (seen above left with Sage Steele at a December 2017 ESPN talent summit) had been at ESPN since 1999, most recently as president of global sales and marketing (sine 2015). He had overseen tons of major changes in his time with the company, from the double-box ad format to ESPN’s appearances at upfronts to their own internal ad agency to their push for metrics that reflect both linear and streaming viewers. But Erhardt’s move is also notable considering how ESPN parent company Disney plans to replace him, passing many of his duties on to Disney executive Rita Ferro (who will be based in New York, not Bristol) and furthering ties between ESPN and Disney’s other properties.

This is part of a shift in how Disney’s advertising sales for media properties are handled, as earlier this year, management of those moved from Disney Media Networks to the new Direct-to-Consumer and International segment, making for increased integration between ads sold on linear and digital platforms. Ferro currently has the title of president, Disney/ABC advertising sales and marketing, and she oversees ad sales for Disney’s entertainment, news and kids linear and digital TV and radio businesses, including the various ABC and Disney channels. Adding ESPN to her portfolio doesn’t mean that ESPN ad sales will be handled exactly the same way as sales at those other entities, but it does mean that ESPN ad sales are now more closely tied into the wider Disney approach.

And it’s notable that Ferro reports (and will continue to report) not to ESPN president Jimmy Pitaro, but to Burbank-based Disney executive Kevin Mayer, the company’s chairman of that direct-to-consumer and international segment (and someone who’s already been significantly involved with some ESPN efforts, including direct-to-consumer streaming offering ESPN+). This can certainly be seen as part of the wider shift away from Bristol for key ESPN personalities and executives, and that’s worth further discussion. But first, some quotes from ESPN’s release on Erhardt:

“Uniting our advertising sales efforts gives advertisers and marketers a one-stop shop for reaching audiences across all of The Walt Disney Company’s media properties, providing clients with the best and most effective tools and marketing solutions possible,” said Mayer.  “Throughout her career, Rita has consistently grown businesses through a focus on brand building and innovation. She has played a crucial role in defining new growth strategies and has been a valued partner to me as we chart a course for our businesses. Rita’s steadfast focus on the needs of both clients and consumers, her track record of successful innovation and delivery of business results make her an ideal candidate to lead our companywide sales efforts.”

Mayer added, “We celebrate Ed’s years of service and contributions to ESPN. In the few months that we’ve worked closely together, he has defined what it means to lead with integrity.  This decision is something he has been planning for some time and it is very much appreciated that he agreed to stay on through the ramp-up phase of DTCI.  We all wish Ed the best in his retirement and thank him for his dedication to the Company and our clients.”

…Added Erhardt, “It has been an honor to be a part of the ESPN and Disney organization. I have been blessed to sell and market the power of sports and the ESPN brand with best team in the business over the past 20 years. I want to thank George Bodenheimer for giving me this opportunity in 1999 and thank our customers for their partnership, confidence, investments and friendship. I am incredibly proud of the ESPN team’s accomplishments.  And I am confident in the direction we’re headed under Jimmy Pitaro’s leadership at ESPN and with Rita at the helm of the overarching ad sales business. She and I have a long, shared history and I’ve seen her leadership first hand. Her integrity and passion for the business will ensure our continued success in the ad sales arena.”

In 1999 George Bodenheimer hired Ed Erhardt from Advertising Age to run ad sales at ESPN. Ed arrived and got to work merging ESPN and ABC Sports Ad Sales, creating one unified group that worked across platforms and setting the template for the industry as to what a truly integrated multimedia sales team could look like.

He has spent his 20 years within our walls and across the industry as a visionary leader, all the while helping ESPN achieve remarkable results. And it is therefore with very mixed emotions that I tell you Ed has decided to hang up the gloves to begin a well-deserved retirement, starting in 2019.

Ed has been trying to make this move for some time, but he has been generous enough to see the company through some changes in recent months, including serving as a trusted advisor through my on-boarding process.

That memo mentions as well that there will be further details announced in the future on how Erhardt’s marketing, research and CreativeWorks responsibilities will be managed.

From those statements, it certainly sounds like this was at least partly about Erhardt’s desire to retire rather than Disney’s desire to make a change, but it’s certainly notable that they’re not replacing him with someone else based in Bristol or someone else even at ESPN, and rather rolling many of his duties into a wider Disney portfolio. That may make some sense; media companies are constantly chasing scale these days, as seen with deals like Comcast-NBC, AT&T-Time Warner and Disney-Fox, and a big part of the desire for scale is the desire to offer advertisers a wide portfolio of properties.

Disney could obviously already do that even with ESPN’s ad sales being managed separately, but they may be able to streamline that approach further by combining that with their other digital and linear properties and providing a consistent offering. And the growing importance of digital and direct-to-consumer products to the company feels like a big part of this too. ESPN+ has repeatedly been described as critical to ESPN’s future, and the forthcoming Disney streaming app (with even more big-ticket offerings) may be even more crucial to the overall company. So there are some apparent advantages to having ad sales for everything, digital, linear, sports and otherwise, all under one roof.

But beyond just the ad sales, it’s interesting to consider how many key ESPN people and functions are now outside Bristol. The vaunted New York studios have seen a lot of shows and talent shift there, and there are plenty of significant shows and operations in Los Angeles as well (especially now that Michelle Beadle and NBA Countdown are relocating back there). That has some benefits for the company, as it’s probably easier to recruit talent to NYC or LA than Bristol, but it’s also a sign of the changing times, and how ESPN isn’t as concentrated in Bristol as they once were. That’s also perhaps part of their closer integration with Disney, which is notable at the executive level too; new president Pitaro was previously a high-level Disney executive, while Mayer is also involved with a significant amount of ESPN projects these days.

Of course, none of that is necessarily good or bad. Good or bad decisions can be made from Bristol, New York or Burbank, and good or bad decisions can be made by someone who oversees only ESPN projects or by someone who oversees wider corporate projects. But these moves are more evidence that ESPN’s a crucial part of Disney’s strategy going forward, and they also suggest that Disney wants ESPN more closely integrated within the wider company than they have been at some points. We’ll see how it all plays out, but it’s certainly notable to see Erhardt leaving and to see many of his responsibilities passed to a Disney exec.